The Underwater Ballroom Society by Stephanie Burgis, Ysabeau S. Wilce, Y. S. Lee, Iona Datt Sharma, Jenny Moss, Cassandra Khaw, Laura Anne Gilman, Shveta Thakrar, Patrick Samphire, Tiffany Trent
Published by Five Fathom Press on April 30, 2018
Genres: Fantasy
Our reviews of this author: Masks and Shadows, Congress of Secrets
Format: eARC
Thanks to Five Fathom Press for providing me with a copy of this book in exchange for my honest review. This does not affect my opinion of the book or the content of my review.

When Stephanie Burgis contacted me to propose I read and review this collection of short stories from various authors, I was quite intrigued: I had enjoyed both her two historical fantasy novels (Masks and Shadows and Congress of Secrets) and her novella Snowspelled, with its alternate version of Regency England where magic is as common as teapots, so that I was fairly certain I would appreciate these short works centered on the shared theme of an underwater ballroom.

The location itself would have been enticement enough as a narrative lynchpin, but once I learned from the preface that an underwater ballroom does indeed exist as the remnant of a once-lavish estate, my curiosity did skyrocket: I have by now learned that Ms. Burgis loves to employ true historical details as her writing’s cornerstones, and the fact that she proposed the same core theme to other writers, to do as they pleased within their stories, made for a potentially fascinating journey.  And that’s what this collection was, indeed.

Each story is wildly different, ranging from steampunk fantasy to what I labelled as “fairy stories for grown-ups”, but each of them features the famous underwater ballroom in one way or another, and the overall effect is a delightful one. Now, if it were only remotely possible to experience at least one of these amazing ballrooms, that would be nothing short of perfect…

In “The Queen of Life” by Ysabeau S. Wilce, we see the unusual juxtaposition of the fae  world with our own reality, exploring the concepts of music and immortality, and of the meaninglessness of a long life devoid of the rich pleasures we can only find in the mortal sphere.

“Twelve Sisters” by Y. S. Lee is what made me think of the definition of ‘fairy stories for adults’: in fairy tales, once the hero does the deed and wins the princess’ hand, the focus fades into the usual ‘happy ever after’, while here we see how that same ever after could be anything but happy, and the hero… well, anything but heroic.  It’s one of the more poignant offerings of the anthology, and the one that was able to better blend fantasy with some modern harsh reality.

“Penhallow Amidst Passing Things” by Iona Datt Sharma is a story about smugglers and law enforcers in a very peculiar 18th century setting, one where both roles are given to quite fascinating female characters. Seriously, I would not mind a full novel describing this kind of world in deeper detail…

“Mermaids, Singing” by Tiffany Trent is the story from Ms. Burgis’ co-editor, a dark fairy tale in which a mistreated hound, forced to perform in a cruel circus, discovers the truth about its true nature and that of its fellow prisoners, while at the same time offering a look into 19th century London and an aspect of its life that comes from history: clearly Ms. Trent shares her co-editor’s penchant for inserting real-life details into stories, which affords some more depth to the tale.

“A Brand New Thing” by Jenny Moss will no doubt appeal to all book lovers, since it focuses on a young woman from the early years of the 20th century, who prefers to lose herself in the stories she reads rather than facing a somewhat dreary reality.  Still, fiction can be satisfying only to a certain extent…

“Four Revelations from the Rusalka’s Ball”, by Cassandra Khaw is probably the weirdest, darkest offering of the whole collection, one I’m somewhat still trying to recover from, and wrap my mind around. Which means it was quite effective.

“Spellswept” by Stephanie Burgis takes us back to the author’s alternate England – or rather Angland – a country where men wield magic and women dictate politics, a wonderful topsy-turvy look into a staid society where gender roles are reversed in so many delightful ways.  If you wondered, while reading Snowspelled, about the tantalizing hints given about Jonathan Harwood and his wife Amy, here you will find all the answers you wanted, besides getting a glimpse into main character Cassandra and her beginnings as a magic-wielding female, the true scandal of the times.

Laura Ann Gilman is an author that’s been long on my radar, so I welcomed the opportunity to sample her writing in this anthology: her “The River Always Wins” is a bizarre, intriguing story about the strange friendship between a Siren and an Erinyes, or Fury, and of a night spent in their old haunt of a peculiar nightclub, where old, buried memories will surface again with dramatic intensity.

“The Amethyst Deceiver” by Shveta Thakrar is probably one of the strangest stories I remember reading, and I’m still trying to come to terms with her concept of… well… mushroom people.  Weirdness can indeed take so many shapes where creativity is involved!

And last but not least, “A Spy in the Deep” by Patrick Samphire takes us to a steampunk version of Mars, colonized by the British Empire and rife with dastardly plots and untold secrets.  The flavor of this story reminded me somehow of Gail Carriger’s Parasol Protectorate, but with a more serious bent to it and a charming heroine I would like to encounter again in other stories – or a full-fledged novel.

Short stories can be tricky creatures, and I know several of my fellow bloggers are quite wary of them because they don’t always offer the same involvement as a book, but the fact that these particular stories strive to cater to our sense of wonder, to our desire for the magical, the uncanny, the bizarre, makes them perfect even for the most contrary of book lovers.  Try them out and take a spin in the underwater ballroom, you never know what might be waiting for you there… 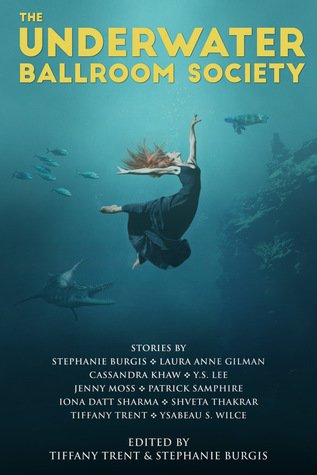