The Defiant Heir by Melissa Caruso
Series: Swords and Fire #2
Published by Orbit on April 24, 2018
Genres: Fantasy
Pages: 560
Source: Publisher
Thanks to Orbit for providing me with a copy of this book in exchange for my honest review. This does not affect my opinion of the book or the content of my review.

I need to just start out with stating how much I love this book and series. It is a refreshing and lively fantasy that has characters that I just can’t get enough of. The entire concept of a non-magic user being tethered to someone with magic, with the ability to essentially turn their abilities on and off, and tying their lives to one another creates very interesting dynamics. Having Amalia, the heir to the Empire, also be a Falconer puts her in a really unique position. The throw in that Zaira, her falcon, is a fire mage, and things get really interesting.

In the last book, we saw Amalia’s relationship with Marcello both start to bloom, but also become stifled as the reality of her duty as heir made it apparent she had to remain open to suitors that could gain the Serene Empire a political advantage. In the Defiant Heir, her relationship with Marcello is further tested and strained as an opportune suitor presents her with enormous possibility politically. It is something she can’t just dismiss. The problem? This suitor is not a normal noble, but a Witch Lord from Vaskandar. Witch Lords are the things of scary childhood stories, with their ability to bend nature to their whims, using trees to attack. the are characterized as mad and violent. They are the things nightmares are made of.

But then we actually meet Kathe, and while he may not be who Amalia pictured as a suitor, there’s no denying there’s some level of chemistry. It’s not the innocent wholesome type of love she feels for Marcello, but rather an exciting and electrifying relationship that offers something new and different. There’s something to be said about mystery and a bit of danger. It’s exciting and Amalia enjoys it (whether she will openly admit it or not).

Kathe loves to play games, and always keeps things very, very interesting. He’s a bit of a wildcard that brings anything but the expected. I always liked Marcello, but I have to admit to kind of rooting for Kathe at this point. I am really hoping to learn more about him in the next book and am quite curious where his relationship with Amalia is headed. It’s hard to deny the benefits for the Serene Empire to have Kathe on their side. Especially as war with Vaskandar is beginning to look inevitable.

I’ve focused quite a bit on Amalia’s relationships, but this book is certainly more than just that. Amalia and Zaira have landed an invitation to the Conclave in Vaskandar. It’s a gathering of the 17 Witch Lords where they vote on matters of the land, including going to war with the Serene Empire. This is the first time someone from the Serene Empire has been invited and Amalia is determined to make the most of it to try and save her people. After the events in the last book, the council takes Amalia more seriously, but it is still a huge amount of responsibility and she still has to prove herself to them.

And Zaira is still very much Zaira. She always livens any party and brings a refreshingly truthful and often humorous perspective on things. It’s hard not to love her.

My only very slight comment (or reader warning) that could be considered less than positive, is that there are some very convenient resolutions in places. You just have to go with the flow and not worry about that. I found it very easy since the characters and everything else are so exciting and fun.

This is an amazing and fun series so far. I wish I had the next book in hand so I could just go straight into it. Highly recommend these books!! 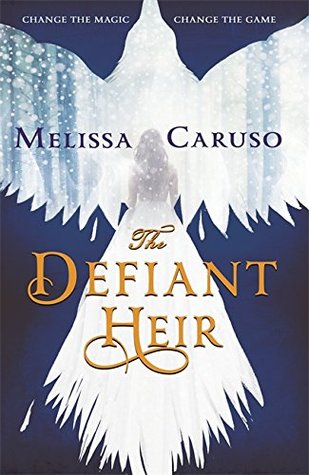