One Way by S.J. Morden
Published by Orbit Books on April 10th 2018
Genres: Science Fiction
Pages: 368
Format: ARC
Source: Publisher
Thanks to Orbit Books for providing me with a copy of this book in exchange for my honest review. This does not affect my opinion of the book or the content of my review.

Given the choice between a one-way trip to Mars and life imprisonment, what would you choose? For Frank, who committed murder in order to save his son, he knows that whatever happens he will be getting a raw deal. But rather than rot in jail for the rest of his life, he figures that maybe, just maybe, he can accomplish something before he dies that will help him be remembered, something that will make his kid be proud of his old man. So, when the representatives of a company contracted to build a new Martian base approaches Frank with the offer to send him to space, he said yes.

But just because he’s an astronaut, doesn’t mean he’s not still a prisoner. Frank had known that he and his fellow inmates recruited for the mission would be watched and guarded at all times, but the situation turns out to be much worse than he thought. The construction company in charge of the project has been cutting corners, and using convicts to build their Martian base is just one of a number of shady practices they don’t want anyone to find out about. Mars is already dangerous enough without having to worry about faulty equipment and strained resources or supplies, and it’s just a matter of time before the accidents begin to mount up, resulting in the crew’s first death. But as more of the inmates start dying, Frank begins to suspect foul play. Signs point to a killer among them, and finding out who it is becomes Frank’s only chance for a ticket home.

I enjoyed One Way for the most part. The first half including the introduction was perhaps my favorite section, in which we got to meet Frank, a former architect serving a life sentence for shooting a man in the face in broad daylight. Far from being a cold-blooded killer, however, we discover that our protagonist did what felt he had to do for the sake of his son. While nothing changes the fact that Frank committed a terrible act, the narrative eventually reveals why he felt he had no other choice. Whether or not I felt Frank’s crime was justified, the author did an admirable job helping readers connect with his character and provided a convincing reason why he would agree to sign up for a mission that’s insanely dangerous and possibly fatal.

The novel then segues into the next phase of the story, in which Frank finds himself in a training program to prepare for life on Mars. This section also serves as a reminder of all the things on the Red Planet that can kill you, ensuring readers understand how high the stakes are. Inevitably, there’s going to be a lot of techno-speak as well, going through the science and process of building a state-of-the-art facility on harsh and uninhabitable planet, giving me some serious flashbacks to my time with The Martian. In fact, if you enjoyed the hard sci-fi aspect in Andy Weir’s novel, there’s a good chance you’ll like it here as well in One Way, especially since as an actual rocket scientist, author S.J. Morden knows what he’s talking about.

Where the novel started to falter was when we were introduced to the supporting cast, made up of the other convicts who were offered the same deal to go to Mars, as well as their handler. While Frank was well developed and written, the other team members felt more lightly sketched and stereotypical. I also felt there was a missed opportunity to explore their backstories, as the story seldom went beyond a glossed over description of what each person was in for. As a result, none of the other characters felt all that fleshed out, so when the prisoners started dying, the impact was muted.

Ironically, for a mystery-thriller, the “mystery” and “thrills” part of the equation also felt a bit lacking. The book struggled to build atmosphere and suspense, and while this may have been a side effect of my inability to connect with any of characters other than Frank, I think Morden also made a few missteps in timing. There were several examples of scenes where the plot would be moving along nicely, only to be sidetracked moments later by a bout of techno-jargon. I can appreciate the author wanting to keep his readers abreast of the logistics and complex operations behind the building a Martian base, but at times it would wreak havoc with the pacing.

That said, I ultimately found One Way to be an entertaining read. Could it have been better? Yes, though the book’s issues didn’t take much away from my enjoyment. I understand a sequel will be forthcoming, and I look forward to what’s next in store for Frank. 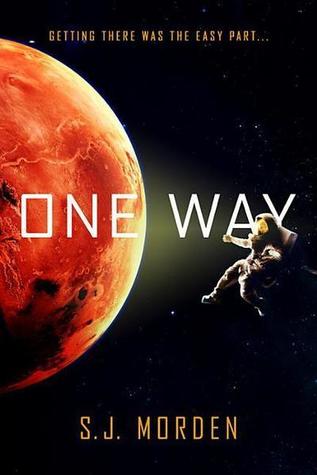