Blood of the Four by Christopher Golden, Tim Lebbon
Published by Harper Voyager on March 6th 2018
Genres: Fantasy
Pages: 480
Our reviews of this author: Dead Ringers, Ararat, Pieces of Hate
Format: eARC
Source: Publisher
Thanks to Harper Voyager for providing me with a copy of this book in exchange for my honest review. This does not affect my opinion of the book or the content of my review.

As much as I enjoy standalone fantasy epics, a part of me feels Blood of the Four would have been better served had the authors not tried to cram everything in this ambitious endeavor into one single volume. I had very mixed feelings about this one, due in part to the wild swings between the highs and the lows. At times, the story would have me gripped in moments of frenzied action and intensity, while at others I would find myself almost lulled to sleep by some of the slower and more tedious sections.

At the heart of this novel is a kingdom torn apart by power struggles and slavery. Once peaceful and prosperous, Quandis has become a nation divided, ruled by a queen whose drug addiction has left her mind addled and unable to control the dangerous magic she dabbles in. One night, while in a state of drug-induced stupor, she accidentally lets it slip to her paramour that she has been attempting to seize the magical power of the Four for herself, drawing upon the forces said to belong to the four ancient sorcerers who founded the kingdom. The queen’s lover, however, was not the only one to hear this confession; Princess Phela, who likes to wander the castle’s hidden passages listening to whispered secrets, was able to overhear her mother’s heresy and decides to use this nugget of information to her own advantage.

After seizing the throne for herself though, Phela is lured by the same power that doomed her mother. Unfortunately for Quandis, the new queen also has a cruel streak, and her lofty ambitions are proving far more disastrous. With a plan to install herself as the kingdom’s divine ruler, Phela sets about murdering, banishing, or enslaving anyone who gets in her way. Demos Kallistrate, son of a disgraced nobleman whose entire family was sold into slavery, now seeks to put a stop to her tyranny, seeking out other allies to his cause. Among them is Princess Myrinne, the younger sister of Phela herself, who despairs at what is happening to Quandis. Then there’s Blane, a member of the Bajuman slave caste who joined the priesthood to gain access to the magic with which he hopes to one day free his people. His sister Daria, whom Blane long thought was dead, also ends up being part of this effort, having escaped slavery and is currently living in disguise as an admiral in the navy.

As I said, there were moments where this book worked spectacularly well for me, but also others that just fell disappointingly flat. The structure of having multiple points-of-view is in keeping with the tradition of an epic fantasy, but in spite of that, the experience felt rather shallow. It’s not easy to balance so many perspectives in the first place, and having only one book to tell an elaborate story meant trying to fit in all your plot development while simultaneously needing to explore character motivations and relationships. Things wound up a little messy, and ultimately I didn’t even get to form much of a connection with any of the protagonists. In the end my favorite POV was probably Daria because she had the most fascinating backstory, not to mention my soft spot for female ship captains (though Daria’s an admiral to boot) and her chapters also featured some top-notch maritime action.

As Christopher Golden and Tim Lebbon are both known for their work in dark fantasy, horror, and thriller genres, you can expect Blood of the Four to harbor some pretty grim tones as well. Certainly, there’s plenty here that will make the grimdark fan feel right at home. Occasionally, however, the darkness and brutality have a gratuitous feel to them, possibly because of the shaky emotional connection I have towards the story and characters, making some of the scenes of sex and violence feel forced or like they were employed for the sole purpose of shock value.

Despite some of its more dubious moments though, there’s a lot to like. Golden and Lebbon have created a rich world and a complex society, serving as the perfect backdrop to the epic narrative they set out to tell. While none of the world-building ideas are all admittedly that original, the authors have nonetheless transformed some of the elements with their own take on things, lending the setting more depth than I’d anticipated. And then there’s the action I’d mentioned, which, when it really gets going, can blow your mind and I daresay these scenes almost make up for some of the novel’s slower parts. A good example is the ending, with the final few chapters bringing on a powerful and exhilarating finale.

Bottom line for me, Blood of the Four had the feel of a book trying to capture the sweeping sense of scope and narrative richness of a multi-volume series in a single 500-page novel. It would be a good choice for fans of the authors’ books from other genres who might be curious to try some epic fantasy, or even for seasoned epic fantasy readers who are looking to kick back with something a little lighter. At the end of the day though, I felt that the goal of a standalone was perhaps too restrictive for this story to reach its full potential. 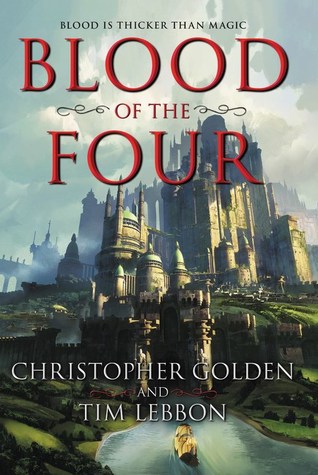