Blood of Assassins by R.J. Barker
Series: The Wounded Kingdom #2
Published by Orbit on February 27th 2018
Genres: Fantasy
Pages: 416
Format: eARC
Source: Publisher
Thanks to Orbit for providing me with a copy of this book in exchange for my honest review. This does not affect my opinion of the book or the content of my review.

In 2017 I placed the first volume of this trilogy, Age of Assassins, among the best debuts of the year and also my favorite reads, so I had great expectations for this follow-up novel: let me say up front that those expectations were more than exceeded by Blood of Assassins, that is not only a worthy sequel but also an amazing story on its own.

Five years have elapsed since the end of the first book, and they have not been easy years either for the world or for assassin-in-training Girton Clubfoot: the political situation has degenerated into all-out war between the three pretenders to the throne of the Tired Lands – Aydor, the former queen’s son, ousted by young Rufra, Girton’s friend, and finally pretender Tomas.  War is never good news, but in a land still suffering from the sorcerer-enhanced conflicts of the past, that brought great devastations with them, this new war is adding a further layer of misery to an already grim situation.  Girton and his master, Merela Karn, have fared no better: to escape from the bounty hunters set on their tracks, they have been forced to abandon their trade and attach themselves to mercenary bands, where Girton’s exquisite skills as an assassins have been replaced by a more brutal approach to killing, namely the use of a war hammer.

Ambushed by a band of savages, the two barely effect an escape toward Castle Maniyadoc – theater of Girton’s previous adventures – but Merela has been poisoned and hovers on the brink of death, leaving her apprentice bereft of her balancing advice and cooler thinking.  What’s worse, Girton’s ability to wield magic – a dangerous skill in the Tired Lands, one that could sentence him to death – is growing stronger, and the scars that Merela tattooed on his skin to keep them at bay are not working as expected, so that the young man must battle daily against the impulse of unleashing such deadly power.

Reunited with his friend Rufra, now King, Girton has little time to enjoy the meeting, because he learns of a plot to kill his friend, orchestrated by a spy that must have worked its way among Rufra’s closest advisers: tasked with this apparently impossible job (Rufra does not seem to worry too much about the possibility of treason), and in constant worry about Merela’s chances for recovery, Girton faces the most difficult time of his young life, one where conflicting emotions and needs threaten to overwhelm him and make him lose everything he holds dear.

Blood of Assassins is a deeply compelling story, one where the details we previously learned about this world fall into a wider and more fascinating context: we come to understand that the central power, the one held by the remote figure of the High King, could not care less about what happens in the outskirts of the realm, where wars are fought, won and lost while the supreme ruler prefers to wallow in his court’s more or less dubious pleasures.

There is a definite sense of lawlessness in the Tired Lands, of the rule of the strongest, that makes the suffering of the peoples dwelling there all the more poignant: the Landsmen, that could be compared to a sort of official army, are more interested in rooting out sorcerers – be they real or simply imagined – and their allegiance often hangs on the whim of their current leader.  The recent turmoil has given rise to a peculiar band of outlaws, calling themselves the Nonmen, who delight in berserker attacks and in the vicious torture of their victims – and sometimes of their own members, with a sort of reckless, bloody abandon that speaks of madness, and worse.  And last but not least the priesthood, that already did not come out with shining colors in the previous book, here looks like an added complication – both moral and political – to a very dire situation.

All this comes together in a story that kept me on my toes for the whole length of the book, among unexpected twists and turns, discoveries and betrayals, and a final battle that left me literally breathless with suspense. Add to that a powerful writing that manages to remain almost lyrical even while describing bloody skirmishes or to-the-death duels, and you will understand why I found this book so enthralling.

As fascinating as all of the above is, the focal point of Blood of Assassins remains Girton: he is a very different person from the one we left at the end of Book 1, and to say that here he’s in a bad place would be a massive understatement.   The five years spent as a mercenary (and with Landsmen, no less, with all the added dangers that his potential for sorcery entails) have both hardened and unraveled him, taking him away from his training as an assassin and teaching him far too much about brute force.  His relationship with Merela has changed as well: there is a thread of resentment toward her, that remains however mostly unexplored due to the fact she’s out of the picture for most of the book, and that comes from the necessity of the scars she must carve on his body to keep the magic at bay. This necessity seems to have placed some cracks in their mutual trust and generated a deep conflict in Girton, who still feels the strong pull of his loyalty – his love – for Merela, while battling with the impulse to rebel against all she taught him.

Losing Merela’s support so early in the story proves almost catastrophic for Girton: she is not only his teacher, his surrogate mother and the only person he used to trust implicitly, even before himself, she is also the one who guides his logical process, and his moral compass, so that her absence makes itself dramatically clear in the sequence of bad decisions Girton takes while pursuing his task for Rufra.  Seeing him so unhinged is a painful experience, because if sometimes I felt like shaking some sense into him, my prevailing emotion was compassion because I could not forget the heavy amount of damage he had to go through in a relatively short life.  And what further damage might be visited on him in the course of the story: as with the previous book, we are given to understand here that we are reading an older Girton’s memoirs, and given as well a few hints of more tragedies to come.  As harrowing as that might be, I know I would not give up this opportunity, because I’m deeply invested in this character and his journey: at the end of this book I saw that the third and final volume already has a title – King of Assassins – and that GoodReads shows its cover, so I imagine my curiosity will be satisfied before long.  Still it will feel like a too-long wait…. 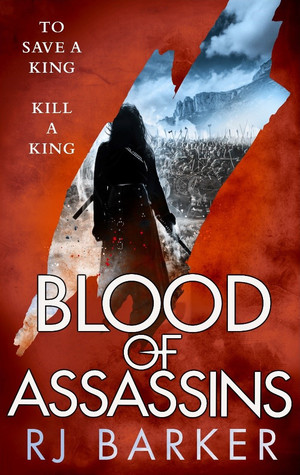