The Sky is Yours by Chandler Klang Smith
Published by Hogarth on January 23rd 2018
Genres: Science Fiction, Fantasy
Pages: 464
Format: ARC
Source: Publisher
Thanks to Hogarth for providing me with a copy of this book in exchange for my honest review. This does not affect my opinion of the book or the content of my review.

It’s rare that I find myself at a loss for words about a book, and while I’m sure I can come up with any number of adjectives to describe Chandler Klang Smith’s The Sky Is Yours, I doubt even that would be sufficient to give the full picture of the novel. This is just one of those once-in-a-lifetime books with a story that is much bigger than the sum of its parts, and can’t be easily summarized or placed neatly into any one category. Here’s to giving it my best shot, though!

Imagine a city, at once high-tech and futuristic, but also burned-out and falling apart. This is Empire Island, where our story takes place. High above in the skies, a pair of dragons continually rain down fire upon the buildings and citizens, creating mass havoc. This has been going on for so many years that they have become a become a fixture on the landscape; those who could not bear the constant threat of destruction have long since fled the city, while those who chose to remain have learned to live with the new reality.

As such, Empire Island has become a place of dichotomies. Within its crumbling underbelly there lives a thriving world of danger and violence, where the gangs are effectively in control. Meanwhile, the rich and the famous live in decadence and luxury, safely shielded from the chaos and poverty in their own backyard. One of our main protagonists, Duncan Humphrey Ripple V, is a young man who belongs to this wealthy upper class. As the scion of one of the city’s oldest and most powerful families, he is also the star of a reality TV show called Late Capitalism’s Royalty, and just like the monarchies of old, his parents have decided that it is time for their pampered and foppish teenage son to be married. A betrothal is thus arranged between Ripple and the Baroness Swan Lenore Dahlberg—AKA Swanny—whose mother will stop at nothing to see her daughter become ruler of all of Empire Island.

But before he can formerly meet Swanny, Ripple ends up crashing his hover car into a landfill, where he meets a young feral woman who has been living among the trash. Her name is Abracadabra—Abby for short—and she has been waiting her whole life for her prince to drop from the skies. Ripple becomes quite taken with Abby too, and when he is eventually rescued by his family, he decides to bring her along.

More than this, I dare not say for fear of revealing anything else; The Sky Is Yours is one of those books where it’s best to go in with a blank slate, the better to be surprised by all its wonders and oddities. The imagination and creativity displayed here is off the charts. It’s almost overwhelming at first; at times it felt like I was thrown into a hyper-imaginative child’s dreams without a tether, with the amount of new sights and sounds you have to take in, but the world is so amazing that you can’t help but give it your full attention. The writing also made it easy to immerse myself; Chandler Klang Smith’s prose is incredibly polished and well put together considering this is her debut, and the story’s wry, humorous tones succeeded in drawing me deeper into the plot.

This book is also populated with a number of fascinating characters. Ripple is a spoiled, self-absorbed, and impudent brat with a terrible case of “affluenza”, and yet I enjoyed reading from his perspective despite his many flaws. I watched with a perverse satisfaction as he lost everything and had to bumble his way through life in a series of events that were packed with both tragedy and hilarity. Then there’s Swanny, who is a study in contrasts. Intelligent, proper, and well-read, she’s nevertheless capable of the most outrageous thoughts and acts. Swanny’s anger is something to behold, though her character does mellow out somewhat once she discovers that a bizarre condition she suffers from will end her life prematurely. And finally, we have Abby, a girl who has been living wild in junkyard, scavenging for her survival. Before Ripple crash-landed on her doorstep, Abby believed all people to be evil half-machines—clearly, she has been alone for a long time with only her pet vulture for a companion—and her naivete can be as irritating as it is endearing.

Needless to say, this book will not be for everyone. Its greatest strength is also its greatest weakness, with the sheer weight of its creativity and uniqueness threatening to overwhelm or sidetrack the reader. Sometimes I felt like I was reading an epic fantasy complete with noble houses, dragons, and a sprawling quest line involving an orphan’s search for her true parents; at other times it felt like I was lost in a futuristic sci-fi dystopian not unlike Blade Runner, and the dissonance caused by this might prove jarring for some. Though I enjoyed the first and last sections of the novel immensely, I also felt the middle part of the story faltered by focusing on too many threads and meandering a little off-track. And finally, some readers might find the characters too off-putting. Ripple, Swanny, and Abby are all products of their environment and upbringing, and their flaws are the results of their individual circumstances. However, because they are also a part of this strange and unfamiliar world, some of their more eccentric of extreme personality traits can make them difficult to connect with.

If you’re seeking something fresh and completely out of this world though, look no further because The Sky Is Yours is the book you’ve been waiting for. I really enjoyed it for the most part, despite some of the plot’s more confounding and meandering moments, but readers with an interest in genre mash-ups and exploring strange new worlds should find Chandler Klang Smith’s debut irresistible and satisfying.

Tags: Chandler Klang Smith, The Sky Is Yours 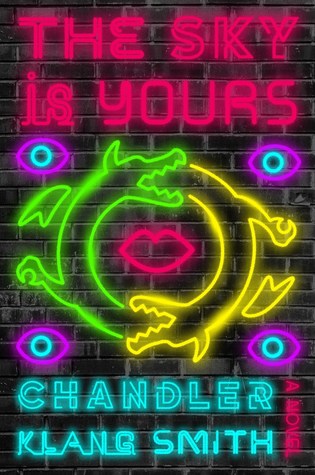