Weave a Circle Round by Kari Maaren
Published by Tor Books on November 28th 2017
Genres: Fantasy, Urban/Contemporary Fantasy
Pages: 336
Format: eARC
Source: Publisher
Thanks to Tor Books for providing me with a copy of this book in exchange for my honest review. This does not affect my opinion of the book or the content of my review.

Weave a Circle round was a lot of fun, a slightly crazy coming of age style story involving a dysfunctional family, a couple of very unusual characters, an house where anything is possible and time travel.  Picture, if you will, the Royal Tenenbaums meets The Book of Lost Things and then throw in portals, time travel and a bunch of oddness.

Freddy is definitely an anxious teenager.  She spends the majority of her time trying to keep a low profile which isn’t always easy given she has a younger sister who thinks she’s a master detective and a deaf step brother who she doesn’t get along with  who seems to hang out with a bunch of geeky kids – doubtless just to make her life even more difficult.  For Freddy, attending school is like walking over the abyss, on a tightrope whilst carrying a wriggling elephant on your shoulders.  Every day feels like the day she will finally come unstuck and plummet into the abyss with all the ensuing harsh spotlight, attention and bullying that are a natural result of losing your place in the stream of anonymity.  Basically, Freddy wants nothing more than to remain unnoticed.

Enter the scene Cuerva Lachance and Josiah.  They take up residence in the house next door and from the moment they arrive, crashing dramatically into a tree (that isn’t a driveway) they bring the whacky with them.  The house becomes a conundrum, chairs and plants seem to multiply, rooms are not always where you thought they should be and the sisters, Freddy and Mel, become fascinated in the place and it’s occupants – in spite of being told in very strong terms by their step brother, Roland, to avoid the place like the plague.  Roland seems to have developed some sort of deep dislike for the new neighbours, Mel thinks there is a mystery to be solved and Freddy, now with a new eccentric and rather disruptive friend in tow finds her worst nightmares about school finally coming true.

So, I mentioned this has a coming of age type feel to the story.  Freddy is unhappy at home and lives her life in a constant state of fear when at school.  Her parents divorced and her mum and step dad seem to be noticeable in their absence as they very rarely seem to put in an appearance.  These two new characters show up in her life causing yet more chaos and unwanted attention until finally the unthinkable happens and Freddy finds herself tumbling through time with Josiah and experiencing a life changing journey.

I really enjoyed this book.  I must say that it has a young feel to it somehow and I think it would make a very good read for a younger audience but at the same time I think it could equally make an enjoyable read for an older audience.  It has an element of mystery to it in terms of the new neighbours, there’s a sense that things might not be quite as harmless as they appear, particularly when taking the ominous prologue into account and the antics and dialogue of the new neighbours was undeniably entertaining.

The characters were quite well drawn and easy to like.  I’m not going to say I loved any of them in particular but they weren’t difficult to get along with.  I think my favourite would definitely be Cuerva Lachance because I simply enjoyed the strangeness that she brings to the story.  Neither Cuerva or Josiah are what they at first seem to be and part of the fun of this story is in the discovery of what’s actually going on.

In terms of criticisms.  Well, I’m never a big fan of time travel to be honest.  I thought it was really well done here but it wasn’t my favourite element of the story.  And, the ending just became a feast of oddity.  But, neither of these two minor quibbles were enough to stop me enjoying the book.

Overall, I thought this was a really fun and entertaining story.  It’s probably not what I originally expected because for some strange reason I got it into my head that this would be one of those neighbour moving in next door type stories that becomes a little bit creepy and Adam’s family(ish) – and it really isn’t.  But, I had fun with this and couldn’t stop reading so that’s always good in my humble opinion. 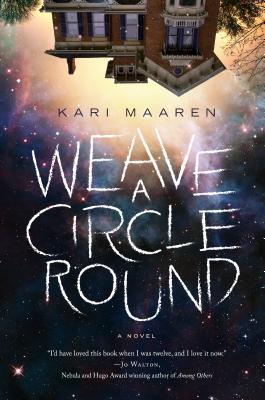