Oathbringer by Brandon Sanderson
Series: The Stormlight Archive #3
Published by Tor Books on November 14th 2017
Genres: Fantasy
Pages: 1243
Our reviews of this author: Shadows of Self, The Bands of Mourning, Calamity
Format: ARC
Source: Publisher
Thanks to Tor Books for providing me with a copy of this book in exchange for my honest review. This does not affect my opinion of the book or the content of my review.

A full five stars to Oathbringer and nothing less. If you’ve read the two previous volumes in the Stormlight Archive, you’d probably already understand; this series is a masterful, meticulous continuation into the journey to explore the mysterious world of Roshar, and once again this third installment is revealing so much more about our characters and their roles in this epic tableau. I find myself speechless, as I often am after reading a Brandon Sanderson novel, because there’s so much to talk about and yet also so much I can’t spoil. I’m also not too articulate when my mind is blown, so trying to put into words my roiling feelings upon finishing Oathbringer will be difficult, but I’ll try my best to convey my thoughts on this work of art. That said, you should still only read this review after you’ve read the first two books (and if you haven’t yet, what are you waiting for, anyway!?) just in case.

For readers who have made it to this point though, you’ll already know that the world is on the verge of another Desolation, a cataclysmic event that has occurred on a cyclical basis throughout the history of Roshar. The heralds of these wars, known as Voidbringers, have returned along with the other forces of Odium, a powerful being who is the manifestation of hatred itself. The focus once more returns to the main characters of this series: Dalinar Kholin, a Highprince of Alethkar who is the brother of the late King Gavilar; Kaladin, also known as the Stormblessed, who was a bridge crew slave before eventually becoming captain of the royal guard; Shallan Davar, a young Lighteyes woman and scholar-in-training, who studied under the tutelage of Princes Jasnah Kholin; and Adolin Kholin, eldest son of Dalinar and a full Shardbearer like his father, who is now betrothed to Shallan. Together, these characters must work together to hold off the end of the world, but to do that they’ll also need some outside help.

Desperate for allies, Dalinar has set up his new base of operations at the legendary city of Urithiru after losing his own home to the invaders, attempting to reach out to the other Highprinces and rulers of other nations in the hopes of forming a united front against the forces of Odium. The enemy has now subsumed a great number of Parshendi fighters for their side through awakening of the previously docile parshmen with their summoning of the Everstorm, and the only chance the humans have now may be the mysterious fabrials known as Oathgates which, when activated, are said to be capable of transporting anyone to Urithiru.

Problem is though, Dalinar not only has the shadow of his past working against him, most people also think he’s gotten soft in his resolve as well as in his head, especially after he expressed beliefs that could be considered heresy. So far, much of what we’ve seen of Dalinar paints him as an honorable, principled, and valiant figure, which is one of the reasons why he’s always been a favorite of mine ever since meeting him in The Way of Kings. But the story has always teased a darkness in his past, hinting at an angry, violent, and ruthless young man before the assassination of Gavilar dramatically altered his way of thinking. There was also that mysterious business with Dalinar’s wife, whom he can’t remember at all—not even her name, which comes across as white noise in his mind if someone utters it in his hearing.

As a result, many questions have been raised about Dalinar’s history, and the good news is that Oathbringer lives up to every expectation by offering up a ton of answers. Is it any wonder that this may be my favorite volume of the Stormlight Archives yet? In between telling the events of the present, the narrative also occasionally takes us back to the past, delving into Dalinar’s younger years. Admittedly, these sections weren’t always easy to read, and not just because we got to see some of the atrocities he’s committed in his youth. It was also hard to reconcile this young man, who constantly fed off his sense of “The Thrill” by seeking violence and death, with the older and wiser Dalinar I’ve come to know. Though I hated to admit it, I even came to sympathize with some of the other leaders and their reluctance in helping Dalinar, fearing him to be a tyrant who will use the Oathgates to usurp them. Still, I suppose there was some beauty in these flashback chapters, especially when Adolin was born and we got to see Dalinar react to becoming a father, but ultimately there is a lot more pain than happiness in these past sequences, and some of the terrible and heartbreaking events covered the final few flashbacks damn near broke me.

Of course, Oathbringer being “Dalinar’s book” notwithstanding, Sanderson also pays plenty of attention to the other characters, developing the roles of Kaladin, Shallan, Adolin, and even those of a number of important supporting figures besides, including a few I can’t name for fear of revealing too much. Shallan in particular gets a lot of love, because following the revelation that she is a Knight Radiant, she has become something of a magical powerhouse. That said, getting a hang of her Lightweaving abilities involve a lot of growing pains, and in inventing multiple identities for herself, Shallan also risks losing the essence of who she is. Much of Shallan’s storyline sees her testing the limits of her powers and learning to become comfortable in her own skin, which also ties into her growing relationship with Adolin, who is trying to come to terms with all that is expected of him as Dalinar’s son. Their romance subplot continues to fill my girlish heart with glee though, because I still can’t get over just how damn cute the two of them are together. To be honest, Kaladin was perhaps my one source of mild disappointment, and only because his character and personality has not evolved as much compared to the others. The storming bridgeboy is still as brave, loyal, and caring as ever, but his penchant to want to save everybody all the time also means that the all-consuming guilt still gets to him when he realizes he can’t. But then again, that’s why we all love Kaladin, isn’t it?

Thus far, I know I’ve only mostly talked about the characters, but mainly because I think they are the heart and soul and these books. But I would be remiss if I didn’t at least mention the incredible world-building, even if I probably sound like a broken record by now, since it’s no secret that Brandon Sanderson is a genius when it comes to this area. I am in awe of the number of new ideas that are still coming out of this series though, and the astounding amount of new knowledge I gained about the world of Roshar from reading Oathbringer. The characters go to some amazing places and see some amazing things, and we learn along with them as they discover new and important information about the Desolations, the Heralds, the Oathpact, Honorblades, spren, and so much more.

And finally, all I have to say about the plot is that it was epic. Virtually no other word would do to describe this magnificent feat of storytelling. While I won’t pretend that every moment of this 1200+ page tome was a riveting experience, I can honestly say I was never bored. Oathbringer was long and slow to build, but in a good way, unfolding at the kind of pace that increases anticipation rather than induces tedium, and there were also plenty of surprises and shocking developments, including both triumphs and losses. The last two hundred pages or so were something else as well. Much of the book builds towards this final showdown, when all the character POVs come together in an exhilarating, climactic battle that’s sure to knock you off your feet. You’ll remember the ending to this one for sure.

All told, Oathbringer is another stunning addition to the already impressive Stormlight Archive, and I’m in love with this series more than ever. Events are starting to come together to form a clearer picture, but of course there’s still much to come in this journey, which I’m excited to continue. If you’ve been enjoying this ride as much as I have so far, trust me when I say there is no way you will want to miss this book. Read it, I say, read it! 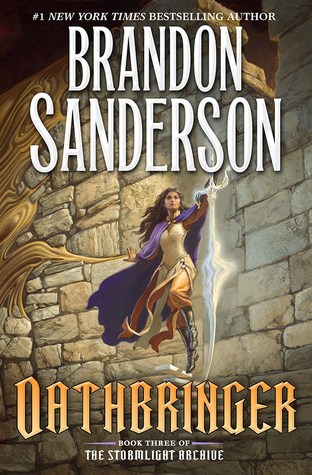