Dogs of War by Adrian Tchaikovsky
Published by Head of Zeus on November 2nd 2017
Genres: Fantasy, Science Fiction, Urban/Contemporary Fantasy
Pages: 2622
Our reviews of this author: The Tiger and the Wolf
Format: eARC
Source: Publisher
Thanks to Head of Zeus for providing me with a copy of this book in exchange for my honest review. This does not affect my opinion of the book or the content of my review.

Dogs of War is one of those books that turned into a very happy surprise for me.  I requested a copy of this because I’ve read this author before and liked his style of writing and so whilst the theme worried me a little, because I imagined it was going to maybe be a bit more military style than I would normally attempt, I had faith that Tchaikovsky would win me over.  I wasn’t wrong.  Dogs of War is so much more than I expected, in fact after the first few chapters of action and warfare it turns into a different style of drama completely.  This is a thought provoking story that really packs a punch.

Rex is a bioform. I’m not going to try and describe all the mechanics of this but basically he’s a genetically modified dog, part human and with heavy duty warfare installed for good measure.  He’s the controlling unit for a Multi-form Assault Pack, an incredible fighting team that includes the characters Dragon, Honey and Bees.  Each of these have their own unique abilities that I won’t dwell on here but take it from me, this is a deadly team of bioforms that you don’t want to tangle with.  Now, Rex controls the unit and Rex’s master controls him.  Rex wants to be a good dog.  He’s programmed to obey not to think and if he’s told to kill he fulfils his orders with ruthless efficiency.  Unfortunately, whilst his actions and motivations are easy to discern those of his master have gone a little awry and Rex and his unit eventually go rogue.

The story then changes tack completely, it moves through a courtroom style drama and then goes on almost into a conspiracy theory style story but at it’s heart and soul is a discussion about rights.  Do Rex and his team have any rights basically, a similar theme to those explored in stories concerning AI.  If you create something, a weapon, a machine – does it have ‘rights’.  Should Rex and his team, and in fact the hundreds of other bioforms created be allowed to live if they’re deemed dangerous.  Of course Rex is dangerous, everything about him is threatening, his size, his speed, his voice – don’t even get me started on the weapons.  No doubt you’ll have heard the phrase ‘there’s no such thing as a bad dog – just bad owners’ – is there any such thing as a bad weapon and isn’t Rex so much more than just a weapon?  Clearly in this instance he and his team are intended as the scapegoats.

I really enjoyed this book.  It’s incredibly compelling, it does jump around in a most surprising fashion and it’s told from a number of POVs but it’s crazily addictive to read and I could barely put it down.  If I was to pin down what really made this book so good for me I’d have to say the characters and the way in which it really makes you think.  I felt near to tears on a couple of occasions – which is not something I ever expected when picking up a book about warfare and bioforms involving 7 or 8 foot tall dogs, and I kept thinking about it for days after completion.  That to me spells out a winning book.

I think it really speaks of the author’s writing chops that he can make me love a team of fighting bioforms.  Honey is amazing,  Dragon, maybe more briefly sketched and yet still easy to picture and Bees – I won’t go there because I don’t even know where to start.  I cared about them all but I absolutely loved Rex and I was consumed with an equal desire to shout at him for being idiotic and scratch behind his ears (which, apart from the fact I couldn’t reach could be a dangerous thing to do).

Overall, I thoroughly enjoyed this.  If, like me, you find yourself maybe not drawn to a military style story then be assured that isn’t really the main focus – of course, there’s some warfare involved and to say it’s a dirty war would be an understatement but this book has much more to offer than that.  It makes you think and it definitely provokes strong emotions.

I’m going to leave it there.  I don’t want to give too much away about the nature of the surprises in store, this is a great novel because of the surprising way it adapts, much like the bioforms and other creations within the story. 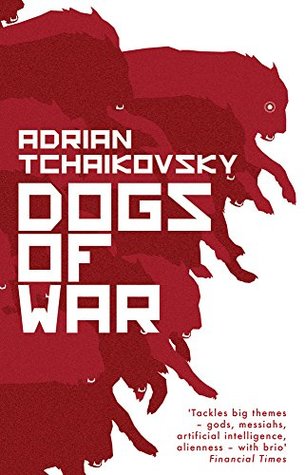