A Plague of Giants by Kevin Hearne
Series: Seven Kennings #1
Published by Del Rey Books on October 17th 2017
Genres: Fantasy
Pages: 640
Format: eARC
Source: Publisher
Thanks to Del Rey Books for providing me with a copy of this book in exchange for my honest review. This does not affect my opinion of the book or the content of my review.

Of all the things I expected to feel when I picked up Kevin Hearne’s new epic fantasy, boredom was not one of them. Unfortunately though, there it was, creeping up on me despite my immense efforts to give this book a chance. It actually pains me to admit this, because I love Hearne and he’s an awesomely funny guy who normally writes great stories, but as much as I tried and tried to like this, something about A Plague of Giants just did not work for me.

Granted, the book opened with a promising and energetic introduction, setting the scene for a charismatic bard to take the stage before a crowd of weary but optimistic survivors who have all gathered in the public square to hear him recount the history of the Giants’ War. By using his magic, a particular kind of kenning that allows the bard to take on the forms of different people, he begins adopting the physical appearances and voices of the book’s many characters, each of whom have a unique story to tell related to their experiences during the giants’ invasion. Subsequently, we are treated to a parade of these narratives presented to us one after another, letting us see a different character’s perspective each time.

The pattern is sometimes broken, however, with glimpses into the present as the bard, Fintan, becomes embroiled in drama resulting from his storytelling. His sections with Master Dervan, a scribe who has been tasked to record everything Fintan recounts, act like interludes to show the day-to-day happenings between each cycle of performances in the square.

Speaking as someone who believes that time jumps and multiple timelines should be employed both practically and sensibly, trying to navigate my way through this novel was a convoluted nightmare. The first few character POVs intrigued me, but as they gradually began to stack up with nary a sign how everything might be related, my interest swiftly plummeted. Even when the bigger picture started to come together, it was too late and my enthusiasm failed to come back. That said, it’s important to note that in his acknowledgements, Hearne mentions that serial storytelling was something he’s always wanted to try and I applaud him for his efforts. It’s only my bad luck that I happen to be antipathetic towards this particular format, and later I also felt that it was completely wrong for what the author was trying to accomplish.

I hate to say it, but characterization was probably one of the first casualties of this approach. Quite simply, I was inundated and overwhelmed by the sea of names and cultures which were all just given perfunctory nods before being swept aside in favor of frenzied action sequences, and as a result, nothing managed to stick. More authors need to realize that while including diversity is wonderful and important, if your characters are weak and underdeveloped, then the gesture itself loses a lot of its meaning and intent. Incredibly, out of the dozen or so character POVs, there was not a single person in this story I truly cared about. Not. A. Single. One. Usually, when it comes to me and books, that’s the kiss of death.

Still, it wasn’t all bad. For one, I was really impressed with the world of this novel, which consists of six different nations each with their own unique customs and cultures. Among those traditions is the magical gift of the kenning, of which there are five when this story begins, though later on a sixth is discovered by a character from Ghurana Nent, making it one kenning specific to the peoples of each nation. Rooted in natural magic, kennings can manifest as different powers depending on the element upon which they are based.  While not everyone has a kenning, those who are blessed with it must be cautious not to use too much of their power, because the more they draw on it the more it robs them of their life span. Those who are not careful and who stretch the limits of their power can find themselves aging years in the blink of an eye.

Bottom line: A Plague of Giants is certainly an ambitious novel, which must have required a lot of planning and forethought. The incredible world-building is a testament to this, and also why it greatly pained me to have to write this negative review. When all is said and done though, I still maintain that priority should have been on characterization first, and the novel’s failure to do this in my eyes made it a tough read, one that I had to grudgingly force myself to finish even if it meant skimming through some sections. Maybe it was the format that completely ruined it for me, but I doubt I’ll be continuing the series even if the next book is presented in a more traditional and linear manner; I just can’t muster the interest to keep on going.

Looking at other reviews though, it appears readers either loved this book or didn’t, and as disappointed as I am to be in the latter camp, I would not discourage anyone from giving A Plague of Giants a try—especially if you’re a fan of the author’s Iron Druid Chronicles and would be curious to see what it’s like for him write something completely different. Here’s hoping you’ll have better luck with it than I did, but I’m sticking with his urban fantasy for now. 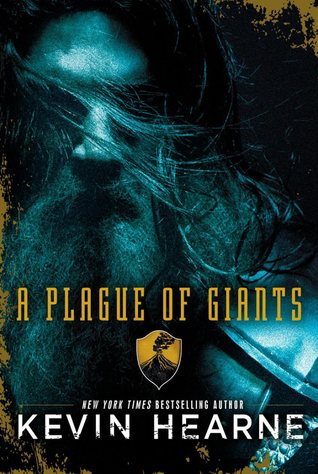