Shadowblack by Sebastien de Castell
Series: Spellslinger #2
Published by Hot Key Books on October 5th 2017
Genres: Fantasy
Pages: 352
Our reviews of this author: Spellslinger, Tyrant's Throne
Format: eARC
Source: Publisher
Thanks to Hot Key Books for providing me with a copy of this book in exchange for my honest review. This does not affect my opinion of the book or the content of my review.

Kellen of the House of Ke isn’t just a disappointment to his parents and an outcast to his people: he’s a spellslinger on the run with a price on his head. You’d think he’d keep a low profile. Maybe it’s his nature. Maybe it’s the company he keeps. But he just can’t keep himself out of trouble…

Shadowblack is the sequel to the riotous joy that was Spellslinger, an unapologetically brash coming-of-age romp – so this review will inevitably be chock-full of spoilers for the first book. While you can pick up the gist by diving straight into Shadowblack, don’t do it – the context will make the second book more rewarding, and Spellslinger is a joy from start to finish. Still here? Right then.

Where Spellslinger was set in the ‘most civilised’ city/culture in the world (at least according to its Jan’Tep inhabitants), Shadowblack is in the world’s equivalent of the Wild West: the Seven Sands (some of which are blue. Neat). Ferius – with her smoking reeds and drawling slang – fits right in. Kellen – well-born, well-bred and very, very wet behind the ears – really doesn’t.

We rejoin Kellen and his light-fingered, short-tempered familiar Reichis trying to steal something from someone who has cheated them. Within sentences, he’s flat on his back having several shades of sass knocked out of him (much to Reichis’s amusement). It’s fun and it’s familiar, and it sets the stage for Ferius to be re-introduced with her usual pizzazz.

It’s also clear from the start that Kellen is struggling with his new context. He doesn’t know how the Seven Sands work. He doesn’t know where he fits. He doesn’t know why Ferius keeps him around, but refuses to teach him anything. His only means of defence – the one spell he’s any good at – will instantly attract Jan’Tep bounty hunters. Where Spellslinger was an origin story, Shadowblack focuses on Kellen’s need to find himself.

Like Spellslinger, Shadowblack largely manages to tap into this well of insecurities and uncertainties without wallowing in angst (although it did feel a little repetitive, however reasonable Kellen’s panic about his future). It does so largely through a plot that trips along at a fine rate (what’s causing an unheard-of shadowblack outbreak), and the increased focus on the mysterious Argosi.

Attacked on the road, Kellen and Ferius are rescued by Ferius’s ‘sister’ Rosie – in whom we finally meet an Argosi who is willing to talk more clearly (or is she?) about what being Argosi actually entails. Not that she and Ferius appear to see eye to eye on any of it.

Rosie has in her care a pretty young woman of Kellen’s age (how awful for him; no prizes for guessing the subplot here) called Seneira, who is similarly affected by the shadowblack, but who – unlike every sufferer Kellen has ever heard of – has no magical abilities. Kellen and Ferius are sucked into trying to understand how this is possible, and determined to find a cure for her and Kellen both. To nobody’s surprise but Kellen’s, the more they dig into the mysterious magical plague, the more hints there are that the Jan’Tep may be pulling the strings to destabilise the wider political balance.

Spellslinger was a high bar to kick off a series with. While Shadowblack is fun, it never quite matches its predecessor, at its best in its comic asides and episodes of squirrel cat belligerence. One of my favourite things about Spellslinger was the way in which it set up – and then deconstructed – its setting and the Jan’Tep’s attitudes, slowly peeling away the privilege to expose just how awful they really are.

I missed this in Shadowblack – it’s a good popcorn read, but it feels rushed, with missed opportunities to explore its new characters and cultural context in similar depth. In particular, Seneira felt poorly defined – when Kellen paused to extol her virtues, I didn’t actually recognise the girl he described from the narrative I’d just read.

However, Shadowblack remains a fast-paced, easy read that is good for giggles and is once again highly cinematic. Kellen remains a likeable narrator with a good heart, and both Ferius and Reichis are a delight to spend more time with. And perhaps because I like my characters spiky and unexpected in their ethics, Rosie intrigued and excited me. There’s no such thing as your average Argosi, and that alone may keep me coming back for more. 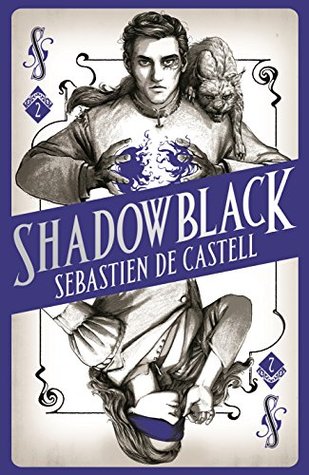