The Genius Plague by David Walton
Published by Pyr on October 3rd 2017
Genres: Science Fiction
Pages: 400
Format: ARC
Source: Publisher
Thanks to Pyr for providing me with a copy of this book in exchange for my honest review. This does not affect my opinion of the book or the content of my review.

Mother Nature can be a scary bitch. Forget horror movies; if you ever want to see some truly messed up, freaky bone-chilling stuff, look no further than your BBC nature documentary. Case in point: the “Jungles” episode of Planet Earth. After so many years, that infamous scene of the killer parasitic fungus bursting forth from the back of a dead ant’s head like some kind of grotesque alien worm still gives me the heebie-jeebies—and clearly, I’m not the only one who feels this way. From The Last of Us to The Girl with All the Gifts, a great number of books, movies, and video games have come out in recent years to show us just how screwed humanity would be if we ever went to war with Kingdom Fungi.

Which was why, when I first found out about the premise of The Genius Plague by David Walton, I was immediately intrigued. After all, like in most of the examples I mentioned above, being infected with a fungal plague usually meant very bad things—like turning into a mindless, slavering zombie, for one. Yet in this case, the fungus actually made you…smarter? This was definitely a new angle for me, and I was curious to see how it would play out.

We begin this tale deep in the Amazon jungle, where mycologist Paul Johns has just completed a successful scientific expedition and is looking forward to heading home with his samples of mushroom specimens. Shortly after boarding the riverboat that would take him and his group back to civilization, however, they are attacked by a group of men disguised in military uniform, and Paul and another tourist are the only survivors of the horrific massacre. Rescue finally comes after a couple days of trekking through the rainforest, and Paul eventually makes it back home to the United States only to be diagnosed with a lung infection caused by breathing in fungal spores while he was in the jungle—and none too soon. Any longer, and he would have succumbed to the pneumonia and died.

Meanwhile, Paul’s younger brother Neil has just been hired by the National Security Agency, where their father also used to work before early onset of Alzheimer’s cut his career short. Neil joins a team of code crackers trying to decipher secret messages intercepted from all around the globe, focusing his attention on a series of encrypted communications coming out of the Amazon basin. Rival guerrilla factions are working together when they shouldn’t be, using a language they shouldn’t know, and the implications of this are making the NSA nervous. At home, things have taken a strange turn as well, as Paul, now recovered from his illness, begins showing signs of increased intelligence. It appears that the fungus has altered his brain functioning, improving memory centers and enhancing pattern recognition and communication skills. Excited about what this could mean for the human race, Paul believes that a symbiotic relationship with the fungus is the next step in human evolution, but Neil, a little more circumspect, is not entirely convinced that joining with an unknown organism would be in humanity’s best interest.

Let’s go back to why nature is so scary, shall we? Nature is scary because, like the fungus in this book, it doesn’t think and it doesn’t have a plan, it simply does what it needs to do to survive. Therefore, we can’t really think of the fungus—or those it infects, for that matter—as a convention villain. To my surprise, it turns out that the idea of a plague making its victims smarter is even more horrifying to me than if it had simply turned all of them into a shambling horde of zombies. Certainly, the scenario put forth in The Genius Plague is much more disconcerting, and the effects of the fungus in the book are much more dangerous. I don’t want to reveal too much more than that for fear of spoilers, but let’s just say that the pathways of this particular pathogen are a lot more insidious than you’d expect, and it gave me chills just thinking about what it does to the human brain.

I also liked how the book focused on genuinely relatable characters who have to deal with some very real problems and tough personal struggles in their everyday lives, even as the entire world descended into madness around them. The story mainly focuses on Neil, a brilliant but reckless young man who seems to achieve his successes through sheer dumb luck more than anything else. But whatever can be said about his faults, the love for his family is beyond any measure. As mentioned before, Neil and Paul’s father was diagnosed with Alzheimer’s, leading to his early retirement from the NSA. Hence, woven into this tale is also an intimate glimpse into a family’s private pain as they watch someone they love decline in memory and mental function, adding an emotional layer to the narrative. Ultimately it leads to some very tough questions and choices for the characters, as more is discovered about the fungus’ effects.

Gripping and intense, The Genius Plague is a wonderful example of the science fiction-thriller genre done right, combining a well-researched premise with fast-paced action and suspense. We even get a little bit of touching family drama thrown in for good measure. Needless to say, I had a good time with this book, and I can’t wait to read what David Walton writes next. 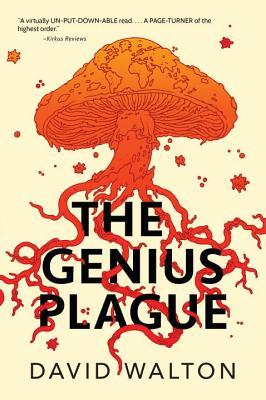