Blackwing by Ed McDonald
Series: Raven's Mark #1
Published by Ace Books on October 3rd 2017
Genres: Fantasy
Pages: 336
Format: Finished paperback
Source: Publisher
Thanks to Ace Books for providing me with a copy of this book in exchange for my honest review. This does not affect my opinion of the book or the content of my review.

While it may be a little bloated at times, which unfortunately weighs the story down in its later sections, overall I have to say Blackwing is a pretty solid debut. Writing vividly and originally, Ed McDonald has managed to pull off something few authors have been able to do in recent years—open my eyes to a new way of doing grimdark.

In this novel we follow our protagonist Ryhalt Galharrow, who is a bounty hunter and captain for the Blackwing, a mysterious organization which serves one of the powerful ancient entities known as the Nameless. His patron, called Crowfoot, is a ruthless master who communicates through a tattoo on Galharrow’s arm, bursting forth from his skin in a form of a raven whenever he has orders to give. In this way, Galharrow receives his latest mission which takes him and his crew into the Misery, an expansive wasteland created when the Nameless unleashed a devastating weapon called the Engine against their enemies the Deep Kings. As a result, corrupted magic runs rampant in the Misery, along with the forces of the Deep Kings still lurking and waiting to strike at unsuspecting victims.

Galharrow now must lead his squad into danger, following Crowfoot’s instructions to track down a wayward noblewoman last known to be holed up in a remote outpost in the Misery. When our protagonist arrives at his destination however, he is surprised to find it under attack by agents of the Deep Kings, which should not have been possible given the protections surrounding the place. Things take an interesting turn when the very woman Galharrow was tasked to find ends up saving him, and it is revealed that the two of them actually know each other from a long time ago. While both characters have changed a lot since those happier days, together they must work through the secrets of their pasts in order to survive the challenges and horrors ahead.

Right away, I was drawn to the strong voice of Galharrow, who commands the reader’s attention with his depth of his experience and force of his personality. He’s a natural leader, easy going and good to the men and women who follow him, but he is also jaded from his long years of being a mercenary and serving a Nameless master like Crowfoot. On the surface, it might not appear as if much separates Galharrow from the usual lineup of grimdark anti-heroes, but to be fair, McDonald does keep a lot of detail about his protagonist close to the vest. Only once the story gets going and the main conflict is revealed do we get a chance to see some of his past seep through.

Without a doubt though, the highlight of Blackwing was the world-building. The setting almost feels like a medley of elements taken from a huge number of genres, which probably explains for the many different ways readers have interpreted the novel’s world despite the rich detail and descriptions. For example, at times I would feel like I was in a high fantasy reading about all the incredible systems of magic, while at others the bleak and barren landscape reminded me more of a post-apocalyptic western. There are a lot of horrific sights and sounds to be found in the Misery too, the corrupted land causing people to relive their worst memories or experience disturbing hallucinations, not to mention the terrible creatures that dwell there. Everything feels so original and fresh in this book, than even the most grotesque and disgusting aspects of the world-building left me in awe of the author’s imagination.

But of course, like many debuts, this novel is not without its flaws. Pacing issues are often a common obstacle for new authors, and McDonald also stumbles in this area as he tries to pack too much lore and world-building into certain parts of the narrative, leaving huge sections of dense exposition that really put a damper on the story’s momentum. After cruising through the first half of the novel, it felt a lot like slamming into a brick wall. I definitely did not enjoy the middle part of the book as much as I did the beginning, and quite honestly, there were even whole chapters where I lost focus and grew bored. Still, after a while, I’m pleased to report that the author wrestles things back under control. If it hadn’t been for the pacing issues, this book would have been pretty close to perfect, though my interest did increase again once the plot was brought back on track—just in time to lead up to a stunning climax and finale.

To tell the truth, I have no idea what’s going to happen next, and I couldn’t be happier about feeling this way. It’s nice to finally come across a grimdark novel that feels fresh and different, one that’s filled with such wild and unique ideas that I’m actually quite curious and really looking forward to see where Ed McDonald will take the story. Hopefully the pacing issues will be ironed out in the sequel now that the bulk of the groundwork has been laid, and I’ll definitely be keeping my eye out for it. 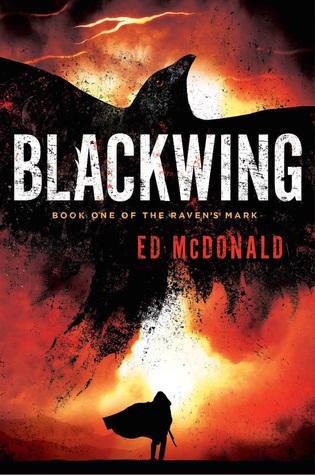