An Unkindness of Magicians by Kat Howard
Published by Saga Press on September 26th 2017
Pages: 352
Our reviews of this author: Roses and Rot
Thanks to Saga Press for providing me with a copy of this book in exchange for my honest review. This does not affect my opinion of the book or the content of my review.

A solid 3.5 star read. Kat Howard enchanted me with her debut Roses and Rot last year, so I was excited to check out An Unkindness of Magicians, her sophomore novel about a hidden world of magic and power. In this “Unseen World”, members of elite magical houses come together every few years to duke it out in a tournament called the Turning, with each family represented by their chosen champion. Ostensibly held to place each house in a hierarchical order based on magical proficiency, the competition may in fact be a front for a more nefarious purpose, as this twisted and snappy tale will soon reveal.

Unlike Howard’s first novel which was written in the first person, An Unkindness of Magicians features a larger cast and bounces between multiple third-person perspectives. Our key players include Sydney, a relative unknown who bursts upon the scene with her extraordinary and unmatched talent with magic; Laurent, an outsider who hopes to enter the Turning for a chance to establish his own House; Grey Prospero, Laurent’s best friend who was disinherited from his House as the result of a serious and undisclosed transgression he committed; Harper, an independent magician determined to infiltrate the Unseen World to discover the truth behind her best friend’s mysterious death; and of course, there are also Miles Merlin and Miranda Prospero, two powerful House leaders who each have a stake in how the Turning plays out.

The situation gets a little muddy though, as the heirless House Prospero takes on Ian Merlin, the beloved son of Miles, as their champion. Left with no other choice, House Merlin must put forth Ian’s sister as champion, potentially pitting the siblings against each other in a fight to the death. Meanwhile, acting as a free agent, Sydney has decided to partner with Laurent and compete on his behalf, and Grey, who is taking a page from his best friend, has decided to try and establish his own House as well, by representing himself in the Turning.

That’s a lot to take in, right? But wait—there’s more, believe it or not. I haven’t even gotten into the “serial killer” part of the plot yet, involving magical women who are murdered for their power-infused finger bones. Then there’s the House of Shadows, a prison for slaves and sacrifices, because unfortunately, magic isn’t an unlimited resource and using it exacts a cost. This is where the Shadows come in, paying the price for the great Houses’ power. As a child, Sydney was a prisoner of the House of Shadows, but she survived and is on her way to winning her freedom, as long as she can fulfill her orders and emerge victorious in the Turning, even if it means having to kill Ian Merlin, whom she has become romantically involved with.

If your head is spinning right now, I don’t blame you; I felt much the same while reading this book, especially in the first half while I struggled to keep all the names and their relationships straight. There’s almost too much going on here for a mere 350-page novel, and as you can imagine, the story felt extremely rushed. Character development also suffered because of this, with the focus being so dispersed on the different storylines and people involved. As a result, I found it nearly impossible to connect with anyone, a stark contrast from my experience with Roses in Rot, which mainly centered on the main protagonist and the deeply compelling relationship with her sister. Possibly, Howard is still trying to find her feet when it comes to writing a large cast and multiple perspectives, finding a balance between pacing and characterization that works. Things were a little shaky with An Unkindness of Magicians, which failed to impart the same level of emotional impact due to weaker characters as well as the breakneck speed at which we whipped through important events.

That said, the story itself is fascinating, and so is the Unseen World in which all of these magical power struggles take place. Furthermore, the second half of the novel is stronger than the first half—not coincidentally, perhaps, since this is also where Howard begins to stitch together the many pieces of the plot. Once the bigger picture starts to take shape, this is when the author’s writing really shines. While her prose in this book is not as beautiful or as deft as it was in Roses and Rot, it does come through every now and then, especially during some of the story’s quieter moments.

All told, I didn’t think Kat Howard’s An Unkindness of Magicians was as meaningful or as gorgeously wrought as her debut, but it does make up for that in other areas, like having a fantastic premise and imaginative world-building. Lack of character development and uneven pacing are perhaps the novel’s main weaknesses, but in spite of that, I still enjoyed myself. I’ll continue to be on the lookout for the author’s future work. 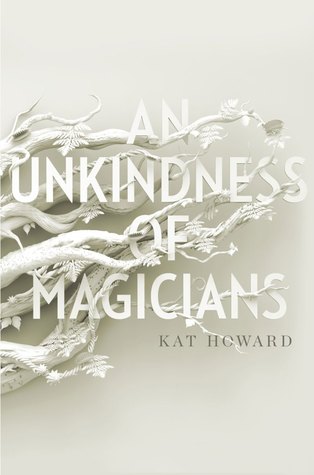