The Imposters of Aventil by Marshall Ryan Maresca
Series: Maradaine #3
Published by Daw Books on October 3rd 2017
Our reviews of this author: The Alchemy of Chaos, An Import of Intrigue, The Holver Alley Crew
Thanks to Daw Books for providing me with a copy of this book in exchange for my honest review. This does not affect my opinion of the book or the content of my review.

Imposters of Aventil carries forward with the fun and excitement I’ve come to expect from the Maradaine series. The Thorn has a habit of getting himself in compromising positions sometimes, and bending (OK, maybe breaking) the law to suit his end purpose fighting the drug trade. But in this, he finds himself the suspect in cases he has nothing to do with. There is an imposter who is using the guise of the Thorn while stirring up trouble with both the constabulary, but also the gangs. Effate also appears to have made its way onto campus. Both of these things make Veranix’s work as the Thorn considerably more dangerous, but also motivates him. Like he needed more motivation to fight the effate drug trade!

Previously I have said that I think Maresca’s series could be read independently and in any order. I mean, I guess you still could, but with this book I would no longer recommend it. This may be the third book in the Maradaine series, but it prominently features Minox and Satrine from the Constabulary series and knowing their background makes this book feel more complete and satisfying. For example, the Constabulary series provides the reader with Minox’s history as an uncircled mage and how that plays in the constabulary as well as what that means within this world historically. This is not absolutely critical for this book, there is enough information there to get an idea of what the reader needs to know, but having read the Constabulary series adds a good amount of character depth and understanding as to how the world works and why Minox’s status as an uncircled mage is so significant.

This one was better for me than the constabulary ones, perhaps just because the detective aspect is not my favorite in general. And to be clear, I did still enjoy the Constabulary books, just not as much as Holver Alley Crew or the Maradaine books series. As for negatives, there were some aspects of this book that just felt a bit more fabricated and coincidental than I typically prefer, and I found myself having to shore up my willing suspension of disbelief.

That said, I also felt like this book played on the strengths of the two series (Maradaine and Constabulary). It had the team work and camaraderie (and vigilante-ism) that I enjoy in Maradaine, and brought it together with the duo of Minox and Satrine. I always enjoyed that powerful team that is made up of two outcasts within their department and I really enjoy Veranix and his friends as they try to hand out their own form of justice. The combination was interesting because the Veranix is obviously on the wrong side of the law even if his heart is in the right, so the introduction of a the law enforcing team of Minox and Satrine made you wonder how things would work as the two sets of characters are at odds with one another.

As it turned out, I really did like the mix of the characters from the different series, its fun seeing them cross paths. With the resolution of this series, I can see where Maresca could be headed for the next project, and I am definitely intrigued. This may be the end of one trilogy, but it does feel like it could be the start of something else and I look forward to seeing what is to come. 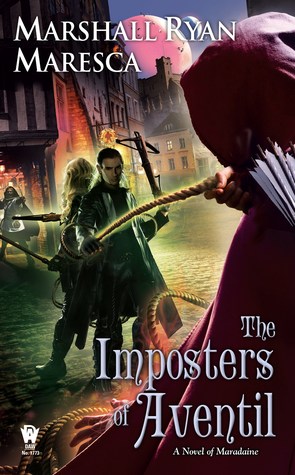