Magicians Impossible by Brad Abraham
Published by Thomas Dunne Books on September 12th 2017
Genres: Thrillers, Urban/Contemporary Fantasy
Pages: 400
Format: ARC
Source: Publisher
Thanks to Thomas Dunne Books for providing me with a copy of this book in exchange for my honest review. This does not affect my opinion of the book or the content of my review.

Magicians Impossible is a fun and exciting adventure that introduces magic to our world. I think this book should do well with readers that are fans of The Magicians by Lev Grossman. It features an older protagonist than a typical coming into powers or magic school book, and with just one or two exceptions, he has been a loner for most of his life. After the death of his estranged father, Jason’s world turns upside down and he finds himself part of something quite unexpected.

I liked Jason’s character. He definitely has some flaws and has managed to create very few personal connections in his life, particularly for someone that seems likable. He is resentful of his absentee father (who just died), and through some flashbacks, we can see some of his disappointments as a child. He grew up believing magic was just simple slight of hand as opposed to actual magic.

After the death of his father, he learns there is such a thing as real magic as well as about the communities that are a part of that previously invisible and unknown part of the world. The Invisible Hand is a training institute that turns those found to have mage potential into magician spies. Instead of just a normal, boring Hogwarts type of academy that teaches young magically inclined individuals how to use their powers for good, or what not, The Invisible Hand teaches them how to use their skill to deceive and battle. It is definitely a fun twist and while reading I was wondered why it haven’t read a book like this before.

In addition to the The Invisible Hand, Jason also learns of a rival magical group, and as the two factions war with each other, Jason finds himself in the middle. He has to determine which side is honest, or at least who he should place the most trust in. Which is hard when he finds himself basically as a pawn each side is trying to maneuver.

I will say this is a fun action filled read. I also have to confess that for me, that’s just about all it was. There is nothing wrong with that, popcorn thrillers are fun for a reason, and this one fits that bill, but for readers that might want to delve a bit deeper, they may find themselves a little disappointed. It’s just a matter of setting expectations for what the book is: a really fun, fast paced book with some cool ideas. To expand some of the other areas, you will likely lose the fast pace that makes it fun. My largest concern with this aspect of the book is that since its so action and pace oriented, I found some solutions to be a bit … easy. Jason is definitely a character who has a quick rise in his abilities and sometimes it just felt like an convenient out. But that’s only the case if you stop to think about it. If you can read and just enjoy the ride without worrying so much about how or why it goes where it goes, well, then I think this is a minor enough element that you’ll find a really enjoyable read.

My only other observation with this book may sound a little silly. There is one setting that, as much as I tried not to, I just kept picturing Monsters, Inc. There is a place that is filled with doors that act as portals to places around the world, and I can’t help it, every I encountered that setting in the book, I pictured an animated Sully and the little girl with pigtails. Probably not at all what the author was going for. I would have preferred to not think of Monsters, Inc while reading this, but the concept is important to this book, and I guess I just have a very strong association of doors like that to Monsters, Inc. Ooops? Not really a fault of the book by any means, but there just didn’t seem to be enough details or description of the place to overpower my reaction.

Anyway, I would definitely recommend the book if you are in the mood for a fast paced thriller with spies and a magical warring underground community. It is a fun and fast read and I really enjoyed the slightly different type of magic school, with the added conspiracy twist thrown in as well. 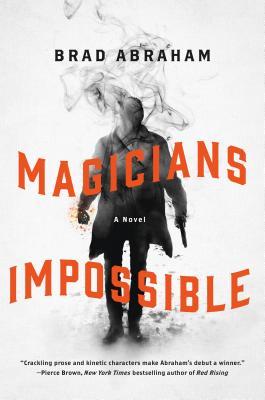