Hannah Green and Her Unfeasibly Mundane Existence by Michael Marshall Smith
Published by Harper Voyager on June 1st 2017
Pages: 400
Thanks to Harper Voyager for providing me with a copy of this book in exchange for my honest review. This does not affect my opinion of the book or the content of my review.

Hannah’s world is turned upside down when her parents split up. But when the Devil wakens from a long nap to discover someone is stealing the evil deeds of humanity, Hannah and her family will be central to putting this right. For various shades of right. He is the Devil, after all.

I’ve been a big fan of Michael Marshall Smith for years, and his books are few and far enough between that a new one is always a celebration (yes, there are Michael Marshall books between times, but they’re not usually quite the same). I like his narrative tone of voice, and his way of twisting aspects of the real world; I like his ability to provoke melancholy and capture heartache.

So Hannah Green and her Unfeasibly Mundane Existence had a burden of expectation to live up to – and sets its stall out from the start as being somewhat different to the rest of MMS’s body of (long-form) work. The prologue is mischievous and knowing, breaking the fourth wall and playing with expectations (if anything, it reminds me of the voice-over at the start of Kiss Kiss Bang Bang). And for the first time, we get a heroine – and instead of being a damaged bloke burdened by his own history, Hannah Green is a girl on the edge of puberty.

If there’s one thing that can puncture the tone of a Michael Marshall Smith novel, you’d think it would be seeing the world through the eyes of an eleven-year-old girl. You’d be right. So much of his work lies on men reflecting on their errors (and their doomed hopes). Hannah brings her confusion and hurt over her parents’ separation, but MMS never loses sight of the fact that his protagonist is a little girl. She brings a lightness to what could (should?) be a dark story, charming in her journey from innocence to experience as she aids the Devil in the hope of healing her family.

…and this is where I end up conflicted. While this story is charming and fun and exhibits Smith’s trademark humour and ability to home in on the heart, I found it a little bit young for my taste – from its emotional tenor right through to its fairly straightforward plot. If it weren’t for Nash’s POV, I’d cheerfully recommend it to younger readers – although arguably even the hard-boiled criminal with no remorse is really fairly light touch.

Nash is a petty criminal trying to become a Satanist, worshipping at an empty altar and drawn to do increasingly more terrible deeds to prove his worth. But more is suggested than described, and in the end he feels an awful lot more like a plot device than an antagonist of substance.

In the end, I think I do lean towards this book working better for a younger audience. I’m not sure if that’s who it’s intended for, but if it brings a new generation to MMS and his dark worlds, I can’t be sorry.

I can just hope there’s a more grown up book in MMS’s future. 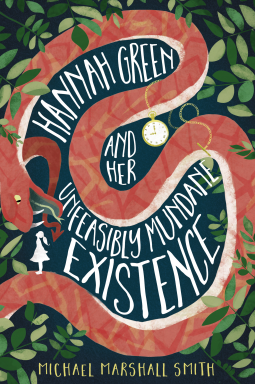