Soul of the World by David Mealing
Series: The Ascension Cycle #1
Published by Orbit on June 27th 2017
Pages: 656
Format: ARC
Source: Publisher
Thanks to Orbit for providing me with a copy of this book in exchange for my honest review. This does not affect my opinion of the book or the content of my review.

Soul of the World is a good debut that sets the stage for an epic, world spanning series featuring magic, fantastical creatures and beasts. Three very different perspectives are used to give us the world view, which features a new and old world, and while there are different names, it feels much like England, France and the Americas.

Aruk’Jar gives insights into the wilds and tribal life and customs. There is a strong tradition of gender roles here and even the magic is split according to “women’s magic”. But we do see strong females here, women can hold on to that magic as a power for themselves. Aruk’Jar has a very “do the right thing” type of personality and is driven to his best for the benefit of his tribe.

Erris shows the reader what life is like on the battlefield and an understanding of the war that is going on. She is in command of a military campaign and is doing a stellar job (I love women who excel in military positions). I really like Erris, she is a strong leader and soldier. She also has magic to aid her, and uses that to her advantage in keeping her troops as safe and effective as they can be.

Sarine is a street artist, and through her we find out what city life is like in New Serresant which seems to be on the brink of a revolution as the common people are beginning the fight for equality and to bring an end to nobles/aristocrats having so much control. It is a city that is beginning to boil with unrest, and Sarine finds herself with a prime seat it in action.

I love Sarine. In fact sometimes I felt like I loved her chapters to the point of it being a detriment to the others. I didn’t want to leave her, and found my interests waning a bit when I would have to shift gears and focus on another story line. Sarine also has a mysterious familiar (descriptions make it sound like a small dragon like creature) that is invisible to others. This creature helps guide Sarine, though his motivations and reasons are not always clear, it is clear he is helpful. And she is powerful. Anyone with magical ability is supposed to be tested (and then pretty much branded), but Sarine has managed to avoid that fate and keeps her abilities hidden. That adds a level of risk for her whenever she taps into her ability, as doing so runs the risk that someone might detect her ability.

My main complaint with this book is that I hate when I rank POVs so easily. And there was a definite hierarchy here for me, with Sarine at the top and Aruk’Jar at the bottom. I am guessing that won’t be the case for all readers as I do feel like all POVs are well written, and each has their own interesting element to add to the over all narrative. But for me, I felt a much stronger connection to Sarine and her story (followed by Erris). Is it wrong the author made me love them so much? No, definitely not. I just wish I was able to have a bit more of a connection to Aruk’Jar’s storyline. I think I felt somewhat similar to his storyline as I did about most of Daenerys’s chapters in A Song of Ice and Fire by George R. R. Martin. I know these chapters are needed, and that there will likely be a stronger pay off as the series progresses, but currently, I feel more detached.

Overall, I would Soul of the World is a strong debut that brings interesting magic to a world that is on the brink of major changes and conflict. I am hoping some of the places where my interest waned a bit pay off in subsequent books (because when there is so much to learn about a world, sometimes the pace can slow). 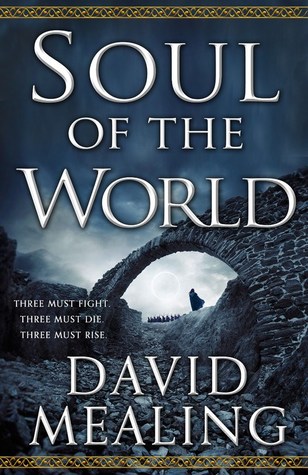