Tomorrow's Kin by Nancy Kress
Series: Yesterday's Kin Trilogy #1
Published by Tor on July 11th 2017
Genres: Science Fiction
Format: Finished hardcover
Source: Publisher
Thanks to Tor for providing me with a copy of this book in exchange for my honest review. This does not affect my opinion of the book or the content of my review.

I’m always up for a good tale of alien first contact, and Tomorrow’s Kin definitely fit the bill. Expanding upon the author’s Nebula Award-winning novella Yesterday’s Kin, this book is told in multiple sections, first chronicling the arrival of the extra-terrestrials before exploring the far-reaching repercussions in the latter parts of the novel.

It is New York City, sometime in the near future. Humanity now knows for certain they are not alone in universe. When the “Debnebs” first arrived, people were scared—understandably. But as time passed and the aliens proved themselves to be peaceful, life on Earth returned to relative normalcy. The visitors even had their Embassy ship parked on a platform in the middle of New York Harbor, even though pretty much everything about them still remains a great mystery. At first, they would only speak to the United Nations, claiming that their physiologies were too different to withstand Earth’s atmosphere and thus they must stay on their ship. No one has any idea what they look like, or what they want. But suddenly, two months later, they are finally ready to talk.

For Dr. Marianne Jenner, the invitation to the Debneb Embassy comes as one of the biggest surprises of her life. After all, she’s just a human genome scientist, working on an esoteric project involving the mapping of mitochondrial DNA. For some reason though, the aliens want to talk to her about the latest research paper, in which she detailed her identification of a new mtDNA haplogroup. Marianne is baffled as to why the Debnebs would be interested in singling her out to discuss her work—that is, until she gets the chance to meet one of them for the very first time. Having seen a Debneb with her very own eyes, Marianne now knows why the aliens desperately need Earth’s help, but time is running out even with humanity’s most brilliant minds working together to tackle the problem.

Before I go further in review, I must warn that Tomorrow’s Kin is not like most first contact narratives. If you simply want your aliens and not much else, then I’m afraid this might not be the book for you, because the Debnebs really only play a major role in the first part of the story (which I believe was the originally novella). The themes involved are also not the ones you’d typically expect from a novel about aliens, focusing instead on topics that run the gamut from environmental issues to foreign policy, which gives rise to plenty of potential for debate. Then, of course, there’s the science, spanning multiple subjects across fields like human genetics, ecology studies, astrophysics, and more. Needless to say, it would be impossible to read this book and fail to appreciate the amount of research that was put into its ideas, and the even more impressive is the way Kress managed to juggle all this information without resorting to awkward info-dumping or worse, derailing her plot.

Still, if you ask me, the best thing about this book is the emphasis on the theme of family. As its title suggests, this novel explores the deeper meanings and roles of kinship, and how those ideas might be perceived by an alien race whose concept of family differs vastly from ours. Following this thread, the story also allows us to get to know Dr. Marianne Jenner and discover her own family ties, examining the web of complex relationships between three generations over a number of years. As well, it’s rare these days to read a book starring middle-aged characters, and rarer still when the main protagonist is a parent of adult children and is even a grandmother. Personally, I found Marianne fascinating. Her relationship with her three children—who hold very different ideological views—forms the very core of Tomorrow’s Kin, influencing the decisions of many of the characters.

I also must admit, this was a difficult review to write. So much of the story—and by extension, a lot of what I want to say about what I thought of it—is affected by a huge revelation near the beginning of the book. I don’t want to spoil anything, so I’ve been deliberately vague, trying to dance around that major plot development. Suffice to say though, Tomorrow’s Kin is tightly plotted and well-written, combining imaginative yet believable elements of science fiction with relevant and thought-provoking issues. The story remained engaging even as it constantly evolved, moving from one stage of the novel to the next, filling me with confidence that the next installment will bring us even more exciting and imaginative developments. I’m looking forward to continuing this series. 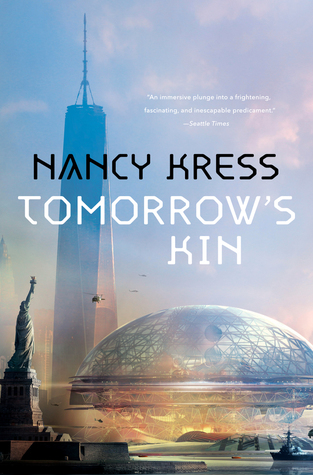