Raven Stratagem by Yoon Ha Lee
Series: The Machineries of Empire #2
Published by Solaris on June 13th 2017
Genres: Science Fiction
Pages: 355
Our reviews of this author: Ninefox Gambit
Format: eARC
Source: Publisher
Thanks to Solaris for providing me with a copy of this book in exchange for my honest review. This does not affect my opinion of the book or the content of my review.

Kel Cheris, half-possessed by the ghost of notorious General Shuos Jedao, survived an assassination attempt that wiped out her entire fleet. Or did she? Physical appearances aside, it appears to be Jedao who usurps command aboard the Hierarchy of Feasts. Formation instinct compels the Kel to follow Jedao – but will he really defend the Hexarchate from the Hafn? Or will he betray them to their deaths?

Ninefox Gambit was one of my favourite books last year, although not all reviewers shared my enthusiasm for its unapologetically oblique world-building and its obsession with the ethics of war. In Raven Stratagem, the core dilemma is much the same – can the ghost of the mass-murdering general be trusted? – but this time we see the action strictly through outside eyes.

Enter General Kel Khiruev, tormented by her enforced loyalties to both the Hexarchate and – unwillingly – to Jedao as her superior officer. Haunted by childhood memories of her mother executing her father for heresy, it’s only Kel formation instinct that suppresses her doubts about the Hexarchate. When Jedao arrives, she can’t resist the urge to obey him even knowing Kel Command wants him dead.

By contrast, Lieutenant Colonel Kel Brezan has weak formation instinct, giving him the freedom to rebel – albeit at the cost of his career, as the Kel hate and fear a free-thinking ‘crashhawk’ almost as much as they do Jedao himself. Ejected from the Hierarchy of Feasts as Jedao tightens his grip on the fleet, Brezan must try to make contact with Kel Command to apprise them of the situation – if he can persuade them to listen to a crashhawk.

With half the story set amongst the Kel and circling around the question of Jedao’s intentions, this could have felt awfully similar to Ninefox. Instead, Yoon Ha Lee breaks new ground, focusing tightly on questions of free will as Jedao relentlessly pushes Khiruev to make her own choices. Formation instinct – ironically, designed as a tool to control Jedao – can drive a doubting Kel to suicide to prevent disobedience. It’s heart breaking to watch Khiruev wrestle with its irresistible demands as well as those of her conscience, all the while followed by the mistrustful eyes of her officers, as torn between duty and desire as Khiruev herself.

Along the way, we get glimpses of the monstrously innovative Hafn and of the fault lines within the Hexarchate as stations respond to Jedao’s presence: some desperate for the protection of the man who has never lost a battle; others desperate to kill the traitor who once slaughtered his entire command for reasons known only to himself. In the middle of it all, Jedao remains an enigma (and as a reader this extends to whether it is in fact Jedao, regardless of the assumptions made by the Kel), his cards kept close to his chest, a blend of sympathetic charm and remorseless authority.

To my joy, Yoon Ha Lee also takes a step back to give us a wider view of his dystopian empire – not just through Brezan’s eyes, but from the perspective of the Shuos Hexarch. Gleefully capricious, famous for murdering children, forgetful of his physical needs, Mikodez is a complex antagonist. He’s also utterly respectful of his non-binary administrative aide and devoted to his family (which hasn’t stopped him from asking his birth sister to transition to manform to become one of his many doppelgangers, deployed to distract assassins and attend meetings on his behalf). And as the Hexarchs debate ways to bring Jedao back into line, it’s Mikodez – the man who leads the spies and assassins – who is their unexpected (and unsuccessful) conscience.

Through Mikodez, we get to see the machinations of the Hexarchs first hand as they juggle their fear of an unfettered Jedao with their need to stop the Hafn – whilst proceeding with their own self-serving agenda to become immortal. If Ninefox explored the ethics of war, Raven is unflinching in its criticism of the ethics of power. We’re not meant to admire the Hexarchate or the Hexarchs, but I defy anyone not to like Shuos Mikodez in spite of themselves (for many of the same reasons I like Jedao himself, not least his wicked sense of humour).

Where Ninefox casually assumed technology and world-building, leaving the reader to flounder or fly with it, Raven casually fills in the background: the nature of the factions; the horror of the ritual torture that underpins the calendars (and by extension the technologies); the back-biting and jockeying for influence between the hexarchs; and the constant fear of rebellion that underpins it all. The Hexarchate persists by brutally suppressing all resistance; but almost every character we meet wavers in their loyalty to it.

…which brings us back to the motif of choice. The entire novel acts as a strident call to arms: to reject inhumane government; to resist wherever possible; to believe in a better world – and to be willing to make sacrifices to secure it. Or even just to improve on the status quo.

It’s equally determined in its gender politics. The Hexarchate may be a dystopia, but it is resolutely open-minded in its assumptions around gender and sexuality, with polygamy routine, at least three prominent trans characters, and an aromantic asexual (who isn’t as much of a monster as he initially seems). It’s singing straight to the choir as far as I’m concerned.

Liberal values aside, I love that this is a series dedicated to shades of red (blood) and grey (morality). In spite of the lack of nuance in the Hexarchs’ villainy and no matter how much you have come to despise them (there’s little chance of sympathising with them, even as you wonder whether Mikodez is right in his assessment of Jedao) – even they have the ability to surprise in their attitudes to their families and immortality.

Raven unlocks the plot that was revealed at the end of Ninefox, but I’m on the edge of my seat for the final instalment of the trilogy. It remains to be seen how the Hexarchate (and their enemies) will respond – and it’s not lost on me that while we’ve been given a teasing glimpse of mad genius Nirai Kujen, we still have no idea what he is actually up to (or whose side he’s on).

All in all, Raven is a triumphant continuation of a vibrant new space opera. I expected intrigue and entertainment; I wasn’t prepared for all the feelings. I can’t wait to see where Yoon Ha Lee takes this rollercoaster next. 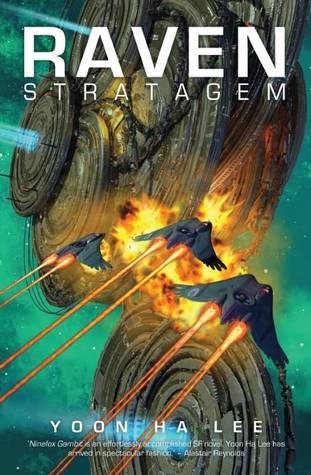