Shattered Minds (Pacifica) by Laura Lam
Series: Pacifica #2
Published by Tor Books UK on June 15th 2017
Genres: Science Fiction
Pages: 384
Format: ARC
Source: Publisher
Thanks to Tor Books UK for providing me with a copy of this book in exchange for my honest review. This does not affect my opinion of the book or the content of my review.

Carina Kearney is a rising star at Sudice Inc, a gifted neuroprogrammer on a highly sensitive research project to record the lived experience: senses, feelings, memories. She’s also a cold-blooded killer. Scared of her urges, Carina flees her job and embraces Zeal addiction instead, drowning herself in drug-induced sprees of virtual murder. But her mentor Roz has ambitions far beyond brain recording, and Carina is key to her success. How can Carina escape her in a near-future California where any brain can be hacked? And can she ever escape herself?

Shattered Minds is a companion novel to last year’s excellent False Hearts, set once again in Laura Lam’s Pacifica – a crime-free, poverty-free near-future California shaped by ubiquitous surveillance and bleeding edge technology. You can make Shattered Minds your point of entry to this universe if you wish: it stands alone – although spoilers in passing for the outcome of the first novel mean you’re better to read them in order. And you really should read False Hearts, because it’s excellent. So is Shattered Minds.

That said: Shattered Minds requires a thick skin. Hearts beats with emotions from the first page, circling tightly around the bond between its twin protagonists, their love a counterpoint to the dark story even when marred by distrust. Minds is a cold-blooded conflict between two psychopathic women, with Carina’s soul the least of the stakes. The narrative is regularly punctuated by fairly graphic violence: it begins with Roz killing a teenage patient For Science, then dives into one of Carina’s torturous fantasies. Consequently, it won’t be for everyone, although it’s rarely gorenographic.

But for those who can endure casual mention of unspeakable acts involving eyeballs, this is a taut page-turner chock-full of thrills. We meet Carina in the Zealscape when a former Sudice colleague hacks into her murderous dreams to show her what Roz has been up to since she left. Mark gives her the keys to the secrets she needs to bring Sudice – and Roz – down; but Carina will only be able to access them by confronting some of her darkest memories. With Roz hot on her heels thanks to the joys of ubiquitous surveillance, Carina must make contact with an underground cell known as the Trust, win their trust, kick her Zeal habit and bring down the most powerful corporation in Pacifica.

Along with oodles of plot and side helpings of soul-searching, there’s plenty of commentary on social and technical ethics. Where False Hearts made it clear that ‘utopian’ Pacifica is as crime-free as Stalinist Russia, Shattered Minds zooms in on the implications of allowing a company to insert chips in your head. Sudice’s nanotech enables near-instantaneous knowledge transfer and makes exercise a game for Luddites; but it also makes your brain a hackable interface at the mercy of a private corporation. Carina worked on a brain recording project; but Roz’s long-time pet project is full reprogramming. Full-scale social engineering ‘for the greater good’ – at any cost and without consultation – is the sort of plot I will always happily sink my teeth into. I’m also a fan of a small tight team taking it to the man, so I was set up to be diverted from start to finish.

While I enjoyed the plot twists and jinks as the narrative delved into Roz’s plans and Carina’s dark history, it was hard to warm to Carina herself. She see-saws between emotional detachment and homicidal tendencies; she frequently considers retreating into addiction. She’s entirely credible, but it’s difficult to get attached rather than follow along for the ride. Worryingly, I enjoyed Roz more (at least initially; she lost me in the gung ho final act); not least for channeling an unholy blend of Orphan Black’s Cosima and Rachel. Roz is entirely comfortable with her all-too-real crimes – my only complaint is that we never get to grips with her motivations; it’s unclear whether she genuinely believes her pet project will make the world a better place or whether she’s just an amoral scientist doing something just to prove that she can (and who happens to be bankrolled by a shady corporation who will profit out of it).

Thankfully, the supporting cast are easy to love, if objectively as absurd as a carefully-designed crack squad from a TV cast (a disaffected heiress; an ex-Fed hacker; his policeman boyfriend; a cosmetic surgeon). Lam’s success is in making them feel like people (however thin), giving each character a moment to shine and an endearing quirk (such as Raf’s need to brag about his cleverness – and his unexpected gesture of friendship in the Apex). Only Dax – delightfully, triumphantly trans – comes fully to life, bringing a much-needed breath of humanity in what could otherwise have been a feeling-free zone.

And I do love the fine line Laura Lam walks between utopia and dystopia in Pacifica. On the one hand, it’s a liberal future without an ism in sight. Difference is embraced and accepted. Poverty appears to have been solved. Climate change is under control. And yet it’s far from perfect, and deeply cynical about the underhanded deals between governments and corporations. There’s a moment where it’s brought into question whether – and how much – the general population will actually care about what Sudice are doing. How many apologists will race to excuse them. How apathetic we can be about things that don’t directly affect us – and how fast we are to dismiss concerns about even those that will. While it’s a less clear call to arms than say The Unit, the message remains clear: pay attention. The world of tomorrow is the world we give a pass to today. 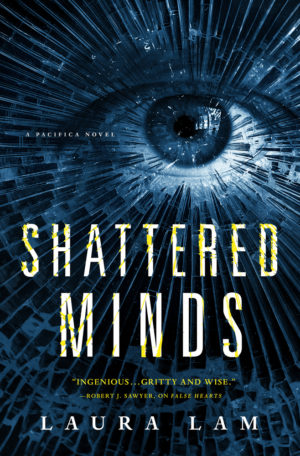