Tyrant's Throne by Sebastien de Castell
Series: The Greatcoats #4
Published by Jo Fletcher Books on June 6th 2017
Genres: Fantasy
Pages: 601
Our reviews of this author: Spellslinger, Shadowblack
Format: Finished hardcover
Source: Publisher
Thanks to Jo Fletcher Books for providing me with a copy of this book in exchange for my honest review. This does not affect my opinion of the book or the content of my review.

It is no exaggeration when I say that a series like the Greatcoats only comes once in a lifetime, and now that it has come to an end, I am filled with a mixture of complicated emotions. On the one hand, I am extremely pleased with the conclusion, with our heroes and heroines getting the satisfying sendoff they deserved. On the other, I no longer know what to do with myself. Like many goodbyes, this one was bittersweet, and if it hadn’t been for the final words of the author’s postscript, I would be having a much harder time right now.

Picking up not long after the events of the previous book, Tyrant’s Throne sees Falcio val Mond and his allies continuing their efforts to put King Paelis’ daughter Aline on the throne of Tristia. To do so, he would need the support of the dukes, but unfortunately most of them would forsake their kingdom than to be ruled by a young girl. To make matters even more dire, talk of war is also brewing in the mountains. More and more, the penniless and starving common folk in the northern duchies are fleeing into neighboring Avares for their salvation, and in turn the Avareans are amassing their forces and weapons, taking advantage of the political turmoil in Tristia to launch an attack. As a tribal-based warrior culture society, the Avareans have never posed a real threat before because of their inability to organize, but a mysterious Magdan has risen up in recent years, uniting the war clans under a single cause. Worse, it is rumored that he is allied with Trin, the murderous traitor who has caused Falcio and his loved ones so much pain.

Traveling under disguise, our protagonist and his best friends Kest and Brasti embark upon a dangerous mission to the north with the intention to capture Trin and bring her back to Castle Aramor to face justice. However, in Avares, they encounter another unpleasant surprise—and this time, it’s a game changer that may bring Falcio’s dreams to ruin and jeopardize everything he has ever worked for. The Greatcoats now have to face a difficult choice, for unfortunately what is just and what is lawful does not always necessarily mean the same thing. But whatever the decision, what’s clear is that it needs to be made soon, for with Avares poised to attack, Tristia might not exist long enough for any of it to matter.

Still, even in the face of insurmountable challenges and impossible odds, the greatest foe Falcio val Mond will face in Tyrant’s Throne isn’t Trin or even the threat of a bloodthirsty Avarean horde. No, our protagonist’s worst enemy has always been himself, and now he faces the moment of truth. To understand the significance of this novel, one must also understand what makes Falcio tick, and while the first three novels have shown that he is a valiant and big-hearted person to his core, there is also a darkness and complexity in him that has been lying in wait to bring about his downfall. Let’s face it, as lovable as he is, Falcio is also be single-minded to the point of recklessness and can be infuriatingly prone to self-sabotage. Certainly, he’s made his mistakes, and now his demons have all come home to roost.

If you’ve been following this series, you’ll also know that Sebastian de Castell doesn’t go easy on his characters, putting them through all kinds of extreme situations. Only through this process though, do we get to see the true measure of his protagonist. Tyrant’s Throne is no different in this sense, and I’m warning you now, there will be several bombshells that will threaten to send Falcio over the edge—hell, they certainly nearly caused ME to lose control!—and there is no end to the shocking twists. At times, Falcio will be driven to think and do some despicable things, and I won’t lie, he even made me quite angry on several occasions. Yet at the same time, it’s hard not to feel for the guy. For as long as we’ve known Falcio, his character has been defined by his love for King Paelis as well as his respect for the rule of law. Now that those two pillars of his identity are at odds, his entire world has just been turned upside down.

As usual though, you can trust the author to have everything well in hand. I’ve heard that final books in a series are notoriously difficult to pull off, but dammit, he makes it look so easy. Everything I love about the previous novels can be found once again in this one, including the epic action, laugh-out-loud humor, daring heroics and inspiring gallantry. No one can make me flip between nail-biting despair and giddy fist-pumping exuberance the way De Castell can, sending my pulse racing with every high stakes plot development. The story is compelling and intense, featuring relentless pacing and an extraordinarily rich cast. All the characters I love (along with some dazzling new faces!) are back as well, ready to kick some ass and take some names, making Tyrant’s Throne a finale to remember.

As endings go, I really couldn’t ask for more. Sebastien de Castell is a rare talent, one of the most gifted storytellers to emerge in recent years and I hope he will continue to deliver more great books for a long, long time. It heartens me to know he has plans to return to the Greatcoats world, but even if this is the last we see of Tristia’s heroes and heroines, Tyrant’s Throne is the perfect ending to cap off this stellar quartet. The Greatcoats now sits in a place of honor on my bookshelf as one of my favorite fantasy series of all time. 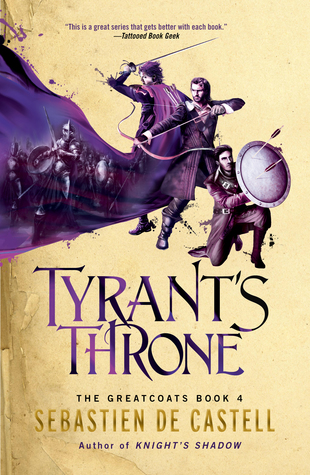