Caitlín R. Kiernan’s new novella is an odd beast. Take our universe and turn it a few degrees to strange and this is the world of Agents of Dreamland. It begins with a meeting between two people who are apparently government agents, takes a journey into the mindset of cult members and reaches out into space as a NASA probe falls silent beyond the orbit of Pluto.

Kiernan is best known for her lyrical dark fantasy and extraordinarily weird short stories. This novella is somewhere in-between. We begin with the Signalman, a special agent getting off a train in the blistering heat of a 2015 Arizona. He is to meet Immacolata who has information for him. Something strange happened and they need to work out what. She writes as if this is hard-boiled noir. Meanwhile, a typically charismatic-type has founded the Children of the Next Level. This is where we meet Chloe. She is an lost, standing on the roof and reaching for the stars. This particular cult offers transcendence into a better future.

This short story alternates in styles between the points of views of the Signalman, Immacolata and Chloe. These are highly descriptive and enigmatic chapters. There are powerful bursts of prose describing the landscape and giving hints at what is going on. This is definitely not the world we live in. But then from nowhere, there are very short, almost factual, bursts of information. The Johns Hopkins Applied Physics Laboratory loses contact with their probe called New Horizons. Something is happening deep in our solar system. Is this something Immacolata knows about or something that has influenced the cult? Towards the end, Immacolata comes to the fore in a quite outstanding chapter where Kiernan’s vision of the world is fully explored.

Kiernan effortlessly calls in her influences here. This a noir-ish Lovecraft (a hint of Yuggoth) written by Vonnegut. So it goes. There are familiar themes from both here – the stability of the human mind, weird aliens and a potential apocalypse. There are passages that are hard to relate to, especially those from the point of view of Chloe and the cult, but then I suppose that’s the point. These ideas, and concepts of transcendence, are not easy to relate from one person to the next, so Kiernan talks about “the gifts of the gods who were never gods”, for example. Chloe explains how she was enraptured by the Drew, the cult’s leader in a very evocative chapter. The Signalman is a great character – he is a bit jaded and cynical about the modern world – and I hope Kiernan revisits him in future stories. I’ve not really read anything like this before, despite it having familiar influences. Which is a good thing.

However, I’m left somewhat unsatisfied. Maybe it is the brevity – not long to get comfortable with Kiernan’s universe or the characters – or maybe it’s the oddness of some of the prose. I thoroughly enjoyed reading most of it at the time (again, some of the passages especially in Chloe’s introduction were hard to cling on to), but then, like the novella itself, it is gone too quickly. I love Kiernan’s writing and imagination and vision. The story felt a little portentous and definitely out-of-time.  Agents of Dreamland is good, almost very good, but left me wanting more. 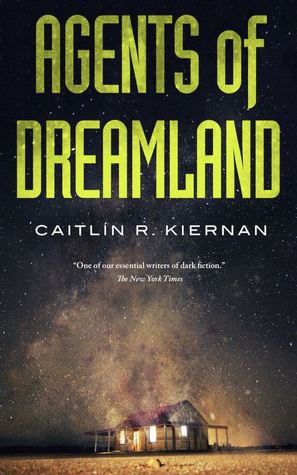