Rotherweird by Andrew Caldecott
Illustrator: Sasha Laika
Series: Rotherweird #1
on May 18th 2017
Pages: 480
Thanks to for providing me with a copy of this book in exchange for my honest review. This does not affect my opinion of the book or the content of my review.

When inexperienced Jonah Oblong is hired to teach history at Rotherweird School, the rules are clearly laid down: nothing before 1800 and nothing local. Rotherweird doesn’t welcome outsiders and is perfectly happy in its ignorance: history is something that happened to other people. Yet the Regulations stipulate the School must not go without a history teacher for more than a term – and there can hardly be a home-grown one, all things considered – so the gangly newcomer settles in to fight for acceptance.

But when Jonah is told that his predecessor disappeared after inciting Form IV to dig up the past, he is tempted to investigate in spite of the Regulations. And Jonah isn’t alone: Sir Veronal Slickstone, new owner of Rotherweird Manor – and another outsider, a local scandal in its own right, however much money he has to throw around – intends to turn all the town’s Regulations upside down. And God help those who get in his way.

Rotherweird lives up to its name: a quirky portal fantasy peppered with singular names (‘Vixen’ Valourhand; Sidney Snorkel; Hayman Salt), meaningful geography (Aether Way; Lost Acre, Escutcheon Place) and a plethora of specific, often hilarious local ordinances. It has the feel of a tongue-in-cheek English rural satire, all mannerisms and idiosyncrasies. It’s no surprise when Oblong is given a chance to win acclaim or humiliation in an annual Wacky Races boat race; or that there’s a momentous Midsummer festival to be observed that will – this year at least – hold more than the usual significance.

Rotherweird builds slowly to firmly establish its setting and characters, with a tongue-in-cheek humour that stops it from getting bogged down. As Jonah flails his way through social excruciation, the layers of Sir Veronal Slickstone’s villainy are slowly peeled away. There’s little doubting that a man who hires a street thug and an actress to pretend to be his family has nefarious goals (not that anyone in Rotherweird has any expectations of an outsider, but he seems to feel it necessary).

His carefully-orchestrated cocktail party on re-opening the Manor could be about making an impression (Rotherweirders may have no expectations, but they have a great deal of curiosity), except for his ruthless control of the guest list and the punitive measures taken against those who try to sneak in. Sir Veronal is not a man to be defied.

…so it’s probably unfortunate that he purchases the mysterious stones put up for sale in Mrs Banter’s curio shop, Baubles & Relics (let’s not call it an antique shop, in a town so disinterested in history). Only town horticulturalist Hayman Salt knows the truth of their origins – if not their purpose – but Sir Veronal is determined to have them at any price, and to unearth their secrets. Poor Mrs Banter, intent on social climbing, doesn’t realise what a viper she’s trying to embrace until its much too late.

Andrew Caldecott serves up a whimsical narrative in which a motley group of well-meaning oddballs band together to save the world without letting anyone notice what’s going on. While the details are sometimes dark, the delivery remains light-hearted as Rotherweird’s heroes get to grips with Slickstone’s increasingly wicked plots. In between the world-hopping, magical hybridisation and historical feuds, the real-world subplots of social aspirations and frustrated romance simmer away: while there’s relevance to the boat race and sexually-charged (but strictly PG-rated) summer evening expeditions, they also serve to maintain the illusion of life as, err, ‘normal’ continuing in Rotherweird.

For all it’s an awful lot of fun, I ended up feeling dissatisfied with Rotherweird (and while I enjoyed it as a stand-alone novel, I doubt I’ll pick up the forthcoming sequel). Few of the characters elevate themselves beyond their initial vignettes, more interested in history than extra dimensions (Slickstone might as well whirl moustachios whilst wearing his mohair trousers). Villainous characters are motivated by self-interest and want to be local worthies; heroes are driven by community and personal relationships. There are no shades of grey in the key motivations, although its heroes are all flawed in small ways: secretive (Salt, Ferensen), arrogant (Valourhand), unhealthily romantic (Gregorious, Oblong and Orelia in their different ways – Gregorius’s mindless matinee white knight routine feeling uncomfortably farcical).

It is a diverting read, but it ends up feeling coy – even cosy – and I’m left uncertain what age group/market it is intended for. For all the intricate twists and turns, it’s oddly simplistic on an emotional level and some of its mysteries (such as Ferensen’s identity) were far less obscure than the narrative seemed to think.

Top marks for inventiveness, but room for improvements in terms of narrative control and character development. 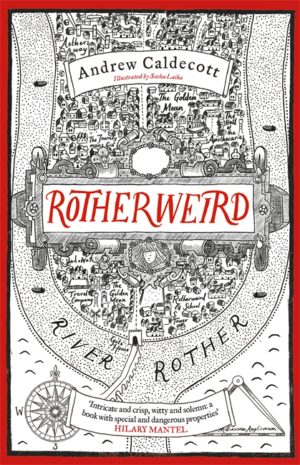