Ararat by Christopher Golden
Published by St. Martin's Press on April 18th 2017
Genres: Horror
Pages: 320
Our reviews of this author: Dead Ringers, Blood of the Four
Format: eARC
Source: Publisher
Thanks to St. Martin's Press for providing me with a copy of this book in exchange for my honest review. This does not affect my opinion of the book or the content of my review.

Adam and Meryam are a newly engaged couple from very different backgrounds, but they have always bonded over their love of adventure. In recent years, they have even achieved moderate fame for their series of videos taken from their travels around the world. Now they are eyeing their next great challenge, an expedition to climb Turkey’s Mount Ararat after an avalanche has reportedly revealed a massive cave up high in the side of the mountain. Wasting no time, Adam and Meryam call upon an old friend to be their mountaineering guide, and together they begin a harrowing race up Ararat in order to be the first ones to discover its secrets.

However, what they end up finding in the cavern goes even beyond their wildest dreams. Within its depths, the couple discover the remains of a large ancient ship, which immediately raises the question: could this be Noah’s Ark, the great vessel that weathered the Biblical flood in the Book of Genesis? To answer this question, a full team is quickly assembled to excavate and study the find, with Meryam at its head as project manager. Included among the scientists and other experts is also a documentary crew, which is how, when a mysterious coffin is unearthed among the ruins, everything that happens next is captured on film.

Throwing caution to the wind, the coffin is pried open, revealing an ugly, desiccated corpse. It is immediately apparent to everyone present that this could not be Noah—for the body is twisted and misshapen, and the top of the creature’s skull is adorned with a pair of horns. The remains of the demon—for it is impossible not to think of it as such—puts everyone on edge, regardless of their religious beliefs. Soon, the tensions start taking their toll, with project members acting erratically and others going missing. Worse, there’s no escape, for a blizzard has swept in, leaving them all trapped on Mount Ararat with an evil force.

This is my first Christopher Golden novel, and I was not disappointed. Of course, it didn’t hurt that I’m a big fan of “snowbound horror”, which I truly believe is starting to become a bonafide subgenre of its own. The most effective stories of this type can make you shiver even while reading in the sweltering heat of summer or indoors beside a warm and cozy fire, if the author can convey the right type of atmosphere. There’s just something I find so creepy and oppressive about the isolation of wintry, sub-zero temperature settings, and happily, Ararat was no exception. Golden was able to capture the forbidding environment of the mountains, making it clear that, whatever may happen to our hapless characters, they are on their own.

I also enjoyed the novel’s premise. I think most people are familiar with the story of Noah’s Ark, but probably far fewer of us would expect it to be the topic of a horror novel. It made for a strange but suspenseful read, with just enough ambiguity to keep one guessing. Contrary to what one might think, the story is also very light on the religious themes, focusing instead on the human drama. Even without the threat of a demonic presence, trap a large group of strangers together in an inaccessible cave on the side of a mountain and inevitably you’ll see the fur start to fly. I was motivated to turn the pages simply because I wanted to see how everything would resolve, and in a way, the tensions and mistrust between the project members reminded me a lot of John Carpenter’s The Thing—all it takes is a bit of doubt and suspicion thrown into the mix, and even the strongest relationships can begin to fall apart.

Yet I do have one major complaint about this book, and that is the story’s pacing. From browsing reviews of Golden’s other works, it seems like a rather common issue among readers, and I couldn’t help but notice a lot of a similar pacing problems in Ararat. Namely, the author blew through things so fast that I barely had a chance to connect to any of the characters, and therefore many of their ultimate fates left me feeling unaffected. Character depth was also pretty much non-existent, with heavy reliance on telling rather than showing, and sometimes the difference between a good book and a great one is the effort and time it takes to develop these little details.

Still, Ararat was a solidly fun read, despite not meeting its full potential. It’s certainly no Dan Simmon’s The Terror, but these kinds of books are also satisfying in their own way, and not least because they are often guaranteed entertainment. If you’re simply in the mood to pass the time with a creepy thriller-horror novel complete with gore, violence, and a staggering body count, this book will get the job done well. 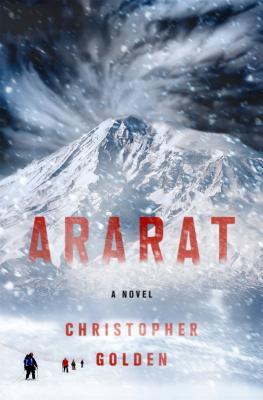