Borrowed Souls by Chelsea Mueller
Series: Soul Charmer #1
Published by Talos on May 2nd 2017
Pages: 312
Format: eARC
Source: Publisher
Thanks to Talos for providing me with a copy of this book in exchange for my honest review. This does not affect my opinion of the book or the content of my review.

I’m definitely partial to reading fantasy in all it’s glory and I particularly enjoy finding a new urban fantasy to sink my teeth into so obviously I was only too happy to grab a copy of Borrowed Souls.  I would say from the outset that this didn’t work as well for me as I’d hoped.  I’d like to think that’s just ‘first book in series’ syndrome but as this currently stands I had a few issues that stopped me falling in love.  In fairness, I think most new series struggle a little bit, they’re trying to introduce a new world, new characters and usually some form of new concept and Borrowed Souls is no different in that respect.  Anyway, to the review.

The premise here is that, as the title clearly states, souls can be borrowed.  Why would people want to rent somebody else’s soul, put bluntly, to avoid staining their own when they partake in dodgy dealings or other such undertakings.  As you can imagine therefore the hiring out of souls has become a very lucrative business.

As the book starts we meet Callie Delgado.  Callie works hard for a living and to stand on her own two feet, but she still has very little, probably because she seems to be constantly bailing her brother out of whatever trouble he finds himself in and once again it seems she is going to need to rescue him.  However, the stakes are much higher this time, Callie’s brother is in trouble with the mob and the only way they’ll let him go, in one piece, is for Callie to undertake a job for them.  A theft basically.  Of course, if Callie is going to help her brother she’s going to need to borrow a soul so that the crime can’t be linked back to her, the problem is she has no money and the Soul Charmer is running a business not a charity.   The only way that he will agree to help is if Callie works for him for two weeks helping to collect unreturned souls – which will pay off the debt.  And, so Callie finds herself working for the Soul Charmer and with the prospect of taking part in illegal activities on behalf of the mob.

I actually thought the story got off the ground fairly quickly.  In no time at all we’re aware of the pressures on Callie and how terrified and nervous she is of getting involved with either the mob or the rather sleezy Charmer.  We also meet Callie’s mother – who really is a piece of work and then we catch up with Derek.  Derek is the hired muscle.  He’s worked for the Charmer for a long time – collecting unreturned souls – and Callie is about to team up with him for the next couple of weeks, to assist.

Now, the first real issue that I had by the time I’d reached this stage is, why would the mob need to make a completely naive young girl do this job for them.  Apart from the fact that it saves them the trouble, obviously.  This was an important job so why wouldn’t they want somebody with some know how?  Likewise, why did the Charmer need Callie to pair up with Derek to help collect souls?  She didn’t have the first notion what she was doing, understandably, and, to be honest Derek has been doing the job for a long time so I doubt he really needed the help.  Other than being the perfect opportunity to introduce a dilemma and some sizzling mind candy to Callie neither of those scenarios really felt believable for me.

Added to this we have Callie’s family.  To call them dysfunctional would be an understatement.  Both Callie’s mother and brother are perfectly annoying characters.  Okay, I can understand that she would of course want to help her brother rather than seeing him delivered home in bite size chunks, I certainly wouldn’t want that on my conscience but I would be a hell of a lot more aggravated by it than Callie was and I’d be letting him know at the first opportunity.  The whole experience with Callie’s family and the way they treat her just made her feel a little lacking in some oomph (for want of a better word).  Clearly she is taken advantage of on a repeated basis but she never stands up for herself – it makes her come across as a constant victim and made me want to shake her.  Stop whining about the way you’re treated and stand up for yourself woman!

Then we have Derek.  Now, he has worked faithfully for the Charmer for a long time.  He’s a moody, no nonsense guy.  He’s not averse to scaring people a little and I suppose after the length of time he’s worked in the business his demeanour is no surprise,  he’s seen and heard all the excuses a million times before and just doesn’t put up with anyone’s b/s.  He finds himself with an assistant whether or not he wanted one and he just gets on with the job at hand.  Of course the two of them find themselves sharing an incredible attraction to each other and for the majority of the time Callie’s assistance during collection amounts to little more than sitting unnoticed in a corner (where Derek usually put her – to keep her out of harms way), or being rescued by Derek when she refuses to sit in the aforementioned corner (because nobody, not even Derek, puts Callie in a corner) before finally helping him to collect souls in her handy little flask.  And, one tiny niggle, it just really irritated me that Derek called Callie ‘doll’ throughout the book.

I hate to sound like I’m really criticising because obviously the book was an easy read and quite entertaining and I thought the concept was interesting – even if it needs a bit more fleshing out.  I suppose the main thing for me was I wanted a little more from Callie.  At the moment she feels very much like a puppet being controlled and manipulated by everyone around her and just moping about it all.

It will be interesting to see how the next book develops, at the moment, I’m erring on the side of caution and thinking this series might not be one for me.  I can certainly see the appeal for others but for me it leaves a lot of unanswered questions that just lessen the appeal a little.

I received a copy courtesy of the publisher, for which my thanks.  The above is my own opinion. 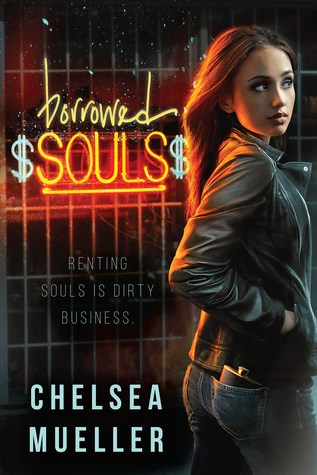