Within the Sanctuary of Wings by Marie Brennan
Series: The Memoirs of Lady Trent #5
Published by Tor Books on April 25th 2017
Genres: Fantasy
Pages: 352
Our reviews of this author: In the Labyrinth of Drakes: A Memoir by Lady Trent
Format: ARC
Source: Publisher
Thanks to Tor Books for providing me with a copy of this book in exchange for my honest review. This does not affect my opinion of the book or the content of my review.

It is with a heavy heart that I bid adieu to another one of my favorite series, but I am also glad that at long last I got to see all the ideas come to fruition in this fifth and final novel of Marie Brennan’s wholly unique Memoirs of Lady Trent. After all, Within the Sanctuary of Wings is everything a fan could want in a finale—a book that ends on a high note of hope and happiness while also deftly tying all the overall series themes and plot threads together.

Furthermore, I’m sure those who have been along for the ride since A Natural History of Dragons will be glad to know that the details behind Isabella’s most infamous scientific discovery—an event that has been teased for the first four books—will finally be revealed. Without a doubt, the answers were worth waiting for. I guarantee that the revelations in this book will change everything you think you know about this series.

The adventure, however, begins rather quietly. While attending a lecture on Draconean linguistics delivered by her husband, Isabella’s attention is unexpectedly pulled away by a Yelangnese stranger with an urgent matter to discuss with her. The man, whose name is Thu, reports that he has discovered the corpse of a new type of dragon while scouting with his fellow rebels in the mountains of the Mrtyahaima. As expected though, the remoteness of the location and its unforgiving conditions do little to faze the headstrong Isabella, who immediately works on putting together an expedition to Yelang so that her team can investigate Thu’s claims.

Unfortunately, their road is plagued with obstacles. There is only a tiny window time in which they must reach the Mrtyahaima mountains before the monsoon season brings heaps of snow upon the peaks. Then there are the political complications. The region is unstable with different tribes chafing under the Yelangnese rule, and it’s not like Isabella is exactly welcome in Yelang either, after the way she offended their government on one of her past adventures. Worst of all, there’s no guarantee that she will find evidence of a new dragon species. Weeks of planning and risk-taking could end up being all for naught.

But of course, our characters find something. And obviously I won’t spoil what it is here, but it’s something HUGE.

Without revealing anything though, I will admit that the twist caught me off guard—likely what it was meant to do, but it also left me with some mixed feelings. I’ve made no secret that one of my favorite aspects of this series are the dragons and the way they are handled—not as mythological beings or exceptional creatures with special abilities or powers as most fantasy novels depict them. In contrast, Brennan’s dragons are part of the natural world, a key theme which has provided the driving force behind all these books. I found this approach refreshingly original. I also loved the science and the learning, and most of all I loved Isabella’s quest to find out as much as she can about how dragons fit into the natural order of the world. Within the Sanctuary of Wings does not really change any of this, and for that I am glad. But at the same time (and apologies for being deliberately vague on this), this installment did also manage to drop a bombshell which introduced a completely new element into my understanding of this series.

As well, there were a few minor issues with pacing. First, compared to the previous books, this one started more slowly, and even the harrowing journey through the snow and ice did little to give the intro an energy boost. Second, this was also a very Isabella-centric story, resulting in less appearances by some of my other favorite characters like Tom and Suhail. Third, while lots of fascinating things happened throughout, a large chunk of the middle was characterized by inaction which, to be fair, couldn’t be helped given the way certain events played out. Finally, the ending wrapped things up way too conveniently for my tastes, but at that point I understood the need for a quick and satisfying resolution.

Still, despite my quibbles, this was once again another riveting book in the Memoirs of Lady Trent sequence. It has been an absolute joy to be with Isabella as she evolved throughout the series, as well as watching her relationships grow. Sometimes, if I allow myself to get really immersed, I even start thinking of this alternate world as my own, and I have to credit the author’s incredible writing skills. These books have a way of drawing me in, making it easy for me to believe I am actually reading an account of an old woman’s youth and rise to fame as a world renowned dragon researcher. I cheered Isabella on as she fought to pursue her dream of becoming a scientist, bucking social conventions at a time when men still dominated academia. It was hard not to shed a tear by the time I got to the very last page, so moved was I to see how far our protagonist has come.

Within the Sanctuary of Wings is truly Lady Trent’s greatest adventure, closing this outstanding pentalogy with style. It is a wonderful, gratifying conclusion to an overall excellent series that I just can’t recommend enough.

Tags: Marie Brennan, Within the Sanctuary of Wings 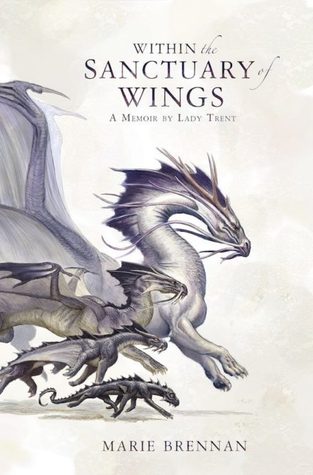