The House of Binding Thorns by Aliette de Bodard
Series: Dominion of the Fallen #2
Published by Gollancz, Ace on April 4th 2017
Genres: Fantasy
Pages: 320
Format: eARC
Source: Publisher
Thanks to Gollancz, Ace for providing me with a copy of this book in exchange for my honest review. This does not affect my opinion of the book or the content of my review.

Any book that has me struggling not to squeak on public transport and then has me nearly miss my bus stop is going to get a big thumbs-up. I loved Aliette de Bodard’s blasted, magic-torn Paris in The House of Shattered Wings and I delighted in the chance to return to it and peer into one of the darker Fallen Houses. This makes it sound vaguely like there’s any such thing as a light Fallen House. There isn’t, which is the first reason I love this world: without being grimdark, it has little time for our petty human morality.

However, House Hawthorn was firmly established as the home of villains in the first book: now they are the protagonists, but still shown through mistrustful eyes. Alchemist Madeleine was a loyal Hawthorn dependent until Asmodeus seized power, slaughtering the previous Head and his allies. Madeleine barely escaped with her life, seeking refuge in House Silverspires – until her addiction to angel essence got her banished. Now she is back in Hawthorn, where it’s made clear that she must give up angel essence (nobody can give up angel essence) or die. The knowledge that Asmodeus will get to choose the manner of her dying keeps her alive.

Fear, perhaps predictably, is a driving force throughout The House of Binding Thorns. This is the Dominion of the Fallen, so duty also registers highly. More surprisingly, so does love.

Tormented Philippe has retreated to a poor neighbourhood of Houseless Annamites, where he pretends to be a human doctor with a higher than average track record. Here he is attacked by one unknown supernatural force and rescued by a second – who turns out to be a Fallen called Berith who has turned her back on the Houses to live (by Fallen standards) in squalor with her pregnant Annamite wife Françoise.

It’s a shock to find a Fallen in love with a human; another to discover her connection to Asmodeus. The couple need Philippe – once tortured almost to death on suspicion of murdering Asmodeus’s lover – to accompany Françoise to House Hawthorn and persuade Asmodeus to visit Berith. Obviously this can’t end well; even the rose-tinted glasses of past loyalty and current need can’t entirely ignore Asmodeus’s reputation. But just as Berith and Françoise will risk anything for each other, Philippe too has a price: he wishes to bring his dead Fallen friend Isabelle back to life, and Berith knows how to achieve this. You don’t need me to tell you that if something sounds too good to be true, it probably is, right?

However, all this may be no more than distraction, because Asmodeus is – inevitably – Up To Something. He has dispatched an ambassador to the dragon kingdom under the Seine to negotiate a treaty; when she goes missing, he sends a second – with Madeleine in tow. Meanwhile, the dragon kingdom has insinuated a spy into House Hawthorn, because they have a rebellion and an essence addition problem – and they’re pretty certain Asmodeus must be behind at least one of them. Why else would be offering his hand in marriage?

Frankly, the idea of Asmodeus marrying anyone – let alone a dragon prince – would be enough to have me at hello. Obviously it must be a gambit. Add in scenes with him lounging around in a dressing gown and being quixotically cruel and you have a character who puts Bond villains to shame. Yet he’s also a fierce ally, who takes his responsibilities seriously. As the plot got twistier and the relationships intertwined, it was hard not to see the narrative taking the shape of a hawthorn itself. The only question was who would end up impaled on its thorns.

I love nuanced villainy, and de Bodard caught me neatly in the trap of wanting Asmodeus’s plans to fail (because I was entirely won over by the lovelorn, duty-bound dragon prince) and not wanting Asmodeus’s enemies to destroy him (although I couldn’t help but appreciate their point of view), because while Asmodeus is a proper villain, he’s a villain I can respect.

If anything, I think Thorns is better than Wings – unburdened by the need to set the scene, it is free to develop its themes at pace and push the world-building in intriguing new directions. While it was tempting (if foolish) to see Silverspires as the good guys, it’s liberating to root for a House that understands its moral ambiguity. Loyalty is everything here, and de Bodard somehow manages to avoid angst even as she amps up the inner turmoil and emotional conflict, giving us forceful characters with unexpected depths.

I’m agog to discover how these twists and turns will change the political landscape of Fallen Paris. My fingers are firmly crossed for another story of the Dominion in the future.

Tags: Aliete de Bodard, Dominion of the Fallen, The House of Binding Thorns 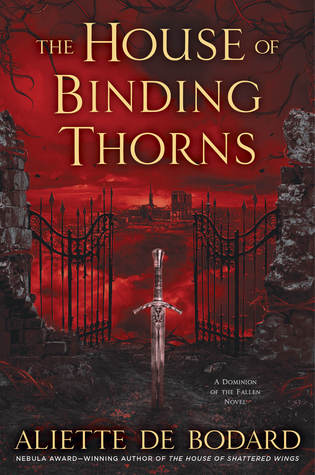