Kings of the Wyld by Nicholas Eames
Series: The Band #1
Published by Orbit Books on February 21 2017
Genres: Fantasy
Pages: 544
Format: Finished paperback
Source: Publisher
Thanks to Orbit Books for providing me with a copy of this book in exchange for my honest review. This does not affect my opinion of the book or the content of my review.

I’m embarrassed to tell you that it took me nearly a month to read this book. But wait, before you laugh at me, a book review blogger, for not being able to read a mere 544 pages in a timely fashion, the truth is, I got myself into a scheduling bind and had to abandon Kings of the Wyld and read several books for some scheduled reviews, before I could finally get back to it. And it is perhaps because of the talent of the author that I had no trouble whatsoever picking up right where I left off. Reading Eame’s debut was one of the most fun times I’ve had in a long while, and I honestly cannot wait to see what he’s going to write next.

Eames uses the tried-and-true plot of the reluctant traveler—think The Hobbit with an aging mercenary and you’ll have an idea of what to expect—well, sort of. Clay Cooper is a guard and lives in the small town of Coverdale with his wife Ginny and his young daughter Tally. He used to be part of a group of mercenaries called Saga, back in the days when merc bands swept through the Heartwyld, a dangerous monster-filled forest, killing everything in their path. But Saga disbanded long ago, and now those glory days are only fond memories. New bands have sprung up and taken over the public’s adoration, but these days, most bands fight monsters in arenas instead.

Clay’s life is boring and predictable—but safe—until his former bandmate Gabriel arrives on his doorstep one day, begging Clay to come with him to rescue his daughter Rose, who is stuck in a city stronghold called Castia, a city that is under attack from a horde of monsters. It’s only a matter of time before everyone in Castia perishes, but Gabriel is determined to get Rose out before that happens.

Clay reluctantly agrees to help his old friend (after all, who can resist the words “Clay, it’s time to get the band back together”), and they set off on the long and dangerous journey to Castia, which will take them through the notorious Heartwyld itself. Along the way, Clay and Gabe recruit the rest of the band—Matrick, Ganelon, and Moog—and their adventure begins. Along the way, the band will encounter some of the worst monsters the Heartwyld has to offer, in addition to a slew of enemies who are determined to stop them. But they’ll also run into some steadfast allies who are indispensable in helping them succeed. The mission seems impossible, but if anyone can conquer some monsters and save Rose, it’s the ex-members of Saga.

You may have noticed that the idea of a “band” is reminiscent of a rock band, and you wouldn’t be wrong. Among many other ingenious ideas, Eames has cleverly given his band of mercenaries the elevated status of rock stars. This tongue-in-cheek mirroring of rock ‘n roll life was funny and entertaining, and was such a good idea that I can’t believe it hasn’t been done before (at least to my knowledge). In keeping with this theme, Eames hides plenty of musical Easter eggs that discerning music lovers will happily discover, but disguises them to fit within the confines of the story. Even his titles are inventive and evoke the idea of what “band” means to most modern-day folks.

Kings of the Wyld is full of well-crafted characters, but there are a lot of them. I loved the five main characters, the ex-members of Saga, but I also fell for a few others that deserve mention. One of my favorites was a ghoul named Kit, who helps the band a great deal on their journey. Kit has the distinction of being unkillable, which makes him a valuable person to travel with. I also enjoyed hearing Kit’s back-story and discovering exactly how he was turned into a ghoul.

A couple of strong female characters stole the show for me. Larkspur is a tough-as-nails bounty hunter who is after Matrick, the former King who is now a wanted man. She’s a formidable opponent who is determined to kill everyone who tries to stop her from nabbing Matrick, but Eames also throws in a cool twist with her character about halfway through the story that made me love her even more.

I also loved the all-female band called the Silk Arrows, led by the quirky and foul-mouthed Jain. Clay and his friends fall victim to their special talent—robbery, as it turns out. I loved Jain and the Silk Arrows for the unexpected humor and warmth they brought to the story.

And a story like this is bound to have lots of bad guys, right? Of course it is, and Eames has given us some good ones. I especially loved Lastleaf, who is a druin, a creature that looks mostly human but sports rabbit ears! How cool is that idea? Lastleaf is the mad genius behind the attack on Castia, but Eames also gives him good reason for that attack. This isn’t a story about black and white characters—each one has shades of both, which makes the worst of them at least a little sympathetic.

And while we’re on the subject, Kings of the Wyld is brimming with humor, and it’s the perfectly executed, perfectly timed sort that I love. I don’t often laugh out loud while I’m reading, but I honestly lost track of the number of times this book made me roar with laughter. Eames’ dialog is so well done, funny as hell, and it made me wonder why he isn’t a script writer. If you are picky about humor in your stories, you should definitely give this book a try.

There’s plenty of non-stop action for readers who love a fast-paced story. This is an adventure tale at heart, the story of a long and dangerous journey, and there’s no shortage of terrible things that happen to our steadfast heroes. But despite exciting fight scenes and over-the-top dangers, what really sealed the deal for me was the emotional depth that Eames brings to his story. No matter who you are, you’ll relate to the universal themes of grief, loss, love and family ties. Some of the most heartbreaking moments deal with Clay’s decision to leave his wife and daughter to go on his adventure, and honestly, that’s only one example. There are plenty more!

And this review wouldn’t be complete without me gushing over Nicholas Eames’ writing skills. I would never guess that he’s a debut author, based on how polished this story is. He’s either a natural, or he’s been honing his skill for years. Whatever the case may be, Kings of the Wyld was a joy to read on so many levels.

Ah, there are so many elements I haven’t even touched on! The many, many types of monsters who live in the Heartwyld (and seriously Mr. Eames, I would love to read an encyclopedia of all the creatures in this story, you know, if you happen to have extra time on your hands), the unexpected steampunk elements (yes!), the marvelous weapons our heroes use, and so much more. The only negative I have that knocked my rating down a bit was the fact that there is so much stuffed into this book, maybe too much. Nicholas Eames is bursting with good ideas, but I almost feel as if he tried to put all of them in this book. I wanted to spend more time exploring some of these ideas and characters, but in many cases, he only mentions them briefly before moving on.

Although this is the first in a series, Eames wraps everything up at the end, so that it really works as a standalone story. But there are a couple of hints of what’s to come next. I can’t tell you how excited I am to read Eames’ next book—it can’t come soon enough for this head-over-heals, dedicated fan. 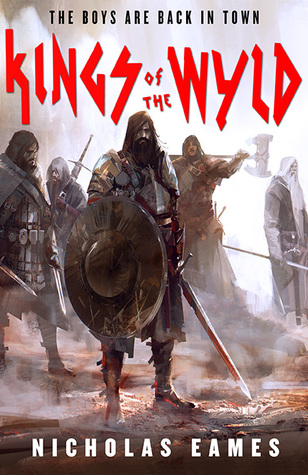