Star's End by Cassandra Rose Clarke
Published by Saga Press on March 21, 2017
Genres: Science Fiction
Pages: 432
Our reviews of this author: Our Lady of the Ice
Format: ARC
Source: Publisher
Thanks to Saga Press for providing me with a copy of this book in exchange for my honest review. This does not affect my opinion of the book or the content of my review.

Star’s End was not the Cassandra Rose Clarke book I was expecting. But then again, I didn’t really have any expectations when I started, other than I knew that Clarke would deliver something truly unique with lots of emotion and detailed characterization. And I was not disappointed. Star’s End may not be the fast-paced or action-packed space opera that you think you need, but you will emerge from the reading experience a more thoughtful person, I guarantee. Clarke has taken an interesting idea about the dangers of having too much power and turned it into a gripping story about love, trust and ultimately doing the right thing. I was surprised how well this story resonates with present-day culture and politics, and while the author didn’t go out of her way to make a statement, there are one or two truths wrapped up in the story, for those readers who choose to look for them.

Esme Coromina is the eldest daughter of Phillip Coromina, the family matriarch whose mega corporation terraformed a group of four moons that surround a sun-like planet called Coromina I. Always concerned about turning a profit, the Coromina Group is responsible for creating the super, bio-engineered soldiers who protect the star system and act as the ultimate weapons of war. The DNA of a mysterious life form dubbed the Radiance is responsible for the strength and abilities of the soldiers, or “R-Troops” as they are called, but even Esme doesn’t know the real story behind their creation. Esme has grown up her entire life knowing that her father is grooming her to take his place as CEO when he dies, and now, that day may be closer than Esme wants to admit. Phillip has contracted galazamia, a wasting disease that will finally end his three-hundred year life—he’s been getting rejuvenation treatments for years—and his final request is a doozy: he insists that Esme round up her three estranged half-sisters and bring them home before he dies.

But her sisters—Adrienne, Daphne and Isabel—have very good reasons for disappearing. Years ago, Esme inadvertently hurt her little sister Isabel, and now Daphne and Adrienne refuse to speak to her because of it. As Esme begins to search for them, compelled by her father not to fail the last task he gives her, she remembers the terrible events of the past that led to Isabel’s disappearance and Adrienne and Daphne’s refusal to have anything to do with Esme and her father. At the highest levels of the Coromina Group are secrets that not even Esme knows, but when she discovers these secrets, she’ll need to decide what to do with them: follow in her father’s ruthless footsteps and run the company the way it’s been run for years, or forge her own path into the future.

Clarke divides her story into past and present sections, jumping back and forth in order to slowly reveal the story behind the Radiance and the R-Troops. It’s a very slow reveal, so patience is definitely required for this story, but believe me, it’s worth it. I was drawn into Esme’s strange life and her conflicted feelings towards her callous father, and never did I feel the story lag. Clarke is a master at drawing out the mysteries of her futuristic star system, and while I did have several guesses about what was going on, the final reveal was not what I was expecting.

Cassandra Rose Clarke is a genius at writing strong but vulnerable female characters, and Star’s End is no exception. I found Esme to be a brilliantly drawn character, a woman who has been carefully controlled by her father all her life, as he maneuvers her into position to eventually take over his job. Phillip is no dummy: he makes sure that Esme is on board with his vision, without actually telling her all the company’s secrets. And Esme seems to be the perfect daughter: obedient, a hard worker, ambitious and usually willing to follow orders without asking questions. But it’s only a veneer, as the reader soon finds out. Underneath, Esme’s love for her sisters wins out over corporate loyalty, and without her father’s knowledge, she begins to make small changes within the company, knowing that the higher she rises, the easier it will be to effect change.

From the flashbacks, we find out early on that something isn’t quite right with the youngest sister, Isabel. She has a habit of disappearing, and she, Daphne and Adrienne are able to communicate in an odd, guttural language that no one else can understand. In the present, we know that Esme regrets something that happened long ago, something that turned her sisters against her, but the reader is kept in suspense until nearly the end of the story. Little by little, we get to see Esme’s progress as she tries to carry out her father’s last wish, to reunite the family, and although it’s sometimes agonizing to see her struggle, I appreciated the author not taking the easy way out.

One of the more emotional subplots of Star’s End deals with Esme’s birth mother Harriet, who had a one-night stand with Phillip but then gave birth to Esme and left her to go back to her life in the military. Esme and Harriet continue to stay in touch through the years, and Harriet proves to be the one constant person in her life.

And if you’re looking for a story about sisters, then look no further. Clarke wedges a block between Esme and her sisters by giving them different mothers, but Esme, as the oldest, never stops trying to mend their relationship. As in real life, family dynamics are rarely smooth sailing, and this is one hell of a messed up family!

Star’s End didn’t blow me away like Our Lady of the Ice did—I absolutely loved the world-building in that book, and this time Clarke plays it safer, giving us a future that isn’t that much different from our own. But I am highly recommending this for the subtlety of the relationships, the growing mystery and the terrifying themes of how powerful one corporation can be. This is a future well within our reach, and in fact, we may already be living parts of this future and not even know it. It’s scary stuff, but ultimately, Clarke gives us a glimmer of hope. Esme has free will and the ability to change things. You’ll just have to read the book for yourself to find out which direction she decides to take. 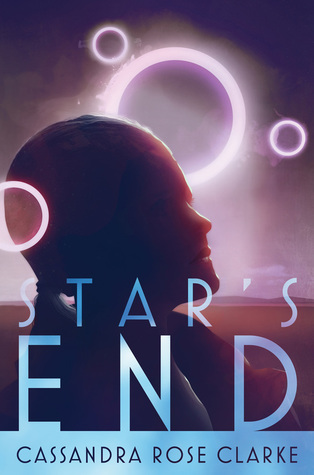