Perhaps the most striking thing about Norse Mythology by Neil Gaiman – amazing cover and jacket aside – is that it reads like a Neil Gaiman novel. Indeed, it could possibly fit in as an extended prologue to American Gods. So how is it that an author of comic books, children’s books and the occasional adult novel turn existing myths – from a culture not his own – into something personal and inclusive to all?
Norse Mythology is Gaiman’s interpretation of classic Norse myths, inspired by his personal interest. This stems from Gaiman’s love of Jack Kirby and Stan Lee’s Thor which Gaiman read as a child. So -what we have here is a relatively short retelling – and not a re-imagining – in a series of 16 tales from the dawn of creation to Ragnarok – the Norse end-of-times. You can read each tale in isolation, or taken as a complete piece there is a rough structure, as we’re introduced to all the favourites (Odin, Thor, Loki, Frigg, Baldur, Heimdall, giants, dwarfs and all the rest) and how they came to be the characters that some might know and love.
Is it a novel? I don’t think so. A collection of tales. Certainly. Anyway, the book of stories opens at the beginning of course. We learn how the nine realms and other classic locations (Asgard, Hel, Midgard, Valhallah, and the rest) came into being. We learn of the World Tree – Yggdrasil and the first gods (Buri and Borr) and how it led to Odin becoming the All-father. There are stories of the tribalism between races: Aesir (wise Odin, mighty Thor, beautiful Baldur, etc.), Vanir (Godess of love, Freyr for example, who everyone seems to want to wed), Asynjur (Frigg and Nanna amongst others), the frost giants, other giants, including one who own enormous beer-brewing cauldrons (Hymir), norns, dark and light elves, and creatures such as the giant wolf (Fenrir) who is also the son of Loki (and his other offspring, including Hel, and the world serpent Jörmungandr). It’s amazing how many children these gods have!
And of course we’re introduced to the first humans, created by the gods, Ask and Embla.
So why are they so readable and why has Gaiman made these his own. I’m not familiar with the detail of Norse mythology. I know a little from my younger days and a little more from the Marvel comic book universe. I don’t know how accurate Gaiman’s depiction of the characters or the events are. I’d hazard a guess at them being spot on! But Gaiman’s gods are fallible, human, lusty, lucky, vain, inconsequential, foolish, dumb, brave and mostly fortunate. They make rubbish choices when it comes to life and love. The story of The treasures of the gods tells of how Odin got his arm ring and Thor got his hammer for example, but these gifts are undeserved. Meanwhile, The Death of Balder has a ridiculous plot point. But Gaiman doesn’t try to re-write it. You get a real sense of these characters. Not necessarily as Gods, but as us; prone to error and goodness and, well, being human. Not all the stories are so black and white, hero and villain.
So Gaiman’s re-telling is really the story of how the Norse Gods came by their godly powers. Almost a comic book origin story. It is little different from the Marvel universe . . . give ordinary people powers or tools to make them godlike and they become corrupt. It’s a combination of the humanity Gaimen instils in the characters and his ever-readable, brilliant prose style that makes you feel like this is a fresh and original telling.
This writing has wit and quirkiness and charm. As exemplified above, brevity is perhaps the key. There aren’t long arduous passages of description. This book is the art of storytelling. There’s no criticism of the characters’ actions, nor preaching about the outcomes. Gaiman writes all the right words in all the right places.
Gaiman tells his tales of Norse Gods we can in someway relate to. That is what makes this a terrific book. You don’t need to be a scholar of any mythology, or even a fan of Gaiman’s previous work, to find something here. There are battles and romances, gods die and are reborn, there are lessons and adventures and fun to be had. 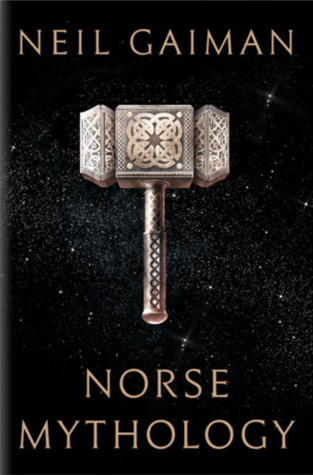