Death's Mistress by Terry Goodkind
Series: Sister of Darkness: The Nicci Chronicles #1
Published by Tor Books on January 10th 2017
Genres: Fantasy
Pages: 512
Format: Finished hardcover
Source: Publisher
Thanks to Tor Books for providing me with a copy of this book in exchange for my honest review. This does not affect my opinion of the book or the content of my review.

To put it bluntly, I never thought I would read anything else by Terry Goodkind again. After my disastrous first attempt to get into The Sword of Truth series, I almost turned down the opportunity to read Death’s Mistress, but now I’m very glad I didn’t. It’s been years since I last read Wizard’s First Rule, and it seemed a shame to potentially miss out on a good start to a new series especially when the author’s style or my reading tastes could have changed so much since. And as things turned out, I did have a surprisingly good time with this.

I also had initial concerns about jumping in without having read the entirety of the previous series, but that was not a problem. The book follows Nicci, a “Death’s Mistress” and a former lieutenant of Emperor Jagang who has since switched her alliance after being converted to the right side by Richard. Now that the latter has solidified his rule, Nicci travels the world helping spread the word of his benevolence and letting everyone know that the world is free, while accompanied by the ex-prophet and wizard Nathan.

At the beginning of this story Nathan decides to seek out the witch called Red, and Nicci offers to go along with him for protection, knowing they can trust no one and must be prepared for anything. Sure enough, after their visit, the witch imparts upon them the following obscure message: travel to a dangerous place far away called Kol Adair, where Nathan will find the answers to his struggle with his waning magic. Little do Nicci and Nathan know, that by embarking on this adventure they will also be a part of something much bigger, bringing back peace and hope to many along the way. Indeed, before they can even set off in earnest, Nicci saves the life of a young sailor named Bannon on the docks, preventing him from being mugged and killed by a gang of thugs. Grateful for her help, Bannon offers his services to the Death’s Mistress, volunteering to fight alongside her and Nathan while on their journey to Kol Adair.

I must confess, the story’s introduction was a bit of a whirlwind for me, with the bewildering circumstances around Red and her message, as well as the reasons for Nicci and Nathan to head to Kol Adair. It’s clear that I’ve missed a lot of history, not having followed The Sword of Truth. Trying to piece together everything that has happened since the last time I spent time in this world admittedly took up most of my attention, though fortunately once our characters actually begin their adventure, the path ahead gave way to clearer purposes and more exciting and engaging motifs. Death’s Mistress has a strong traditional fantasy vibe to it, with emphasis on the classic quest narrative. The question why Nicci, Nathan and Bannon were on this journey in the first place became less important to me overtime, while the details surrounding where they’ll go or what they’ll do when they get there or who they’ll meet gradually became more fascinating and relevant.

If there’s a bigger story, it hardly matters—at least at this point. Goodkind is starting a new series here, and you can tell he’s doing his best to make Death’s Mistress as accessible as possible. There’s not much history or deep context in play, and no greater conflict to concern ourselves with…yet. Rather, our characters are given a relatively straight forward task (go to Kol Adair, spread the word of Richard’s reign) and while on their travels they encounter various situations in which they can lend a hand or help solve a problem (picking up some side-quests along the way, so to speak). In fact, the structure of the plot can almost be described as “episodic”, the way our adventuring party moves from one place to the next, setting things aright before moving on again to save the next village or help defend the next town.

The results are surprisingly enjoyable. After all, few things are better than being able to explore new worlds, meet new people, and witness epic battles infused with a real sense of excitement and magic. If you’re a fantasy reader, these are the moments we live for, and this book had a way of satisfying all those little pleasures. From our time with our characters on the high seas, to watching them fight alongside a fishing village against a fleet of attacking slavers, to being with them as they try to save a land leeched of life, it’s never a dull moment with this book. The characters are also memorable, with Nicci being a strong protagonist I could sympathize with and root for. Supporting characters are also well-written and fleshed out, leading to some highly emotional and shocking surprises near the end.

Like I said, I’m very glad I decided to give Death’s Mistress a chance. At times, Goodkind’s writing still has the subtlety of a cudgel and some of his scenes can be a little schmaltzy, but on the whole my experience was a lot better than I expected. Nothing too complicated here in terms of plot, but I think in this case, the straightforward and simple approach worked in the book’s favor, offering readers a chance to just sit back and enjoy the ride. 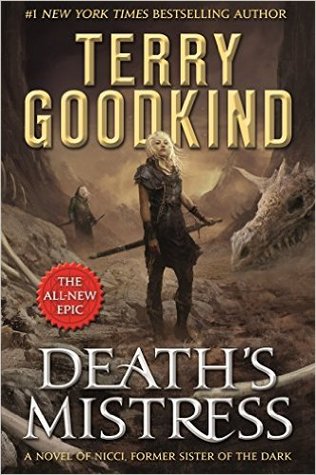