The Black Wolves of Boston is the first book in what I hope will be a series.  I enjoyed this, it was different than I expected, in fact much more deep in terms of the set up.  Basically, this is urban fantasy, there are werewolves, vampires, Virtues and Wickers but none of them are quite as I’ve read about them before.  Definitely a thinking piece with plenty to ponder over.  In fact, to be honest, if I had a clearer reading schedule I might be tempted to read this again just because there is such a lot of material to think about.

At the start of the story we meet Joshua. Not more than 24 hours earlier Joshua’s life was torn apart, literally torn apart.  Out at a prom committee event the entire group that Joshua was with were massacred in some sort of frenzied attack and Joshua was left wounded.  He’s not wounded for long though, attacked by not any old animal but a werewolf, Joshua seems to be recovering at a positively indecent rate and pretty soon has to make a dash out of town before any one figures out what he is – or more to the point before he hurts anyone himself.  Hence, we meet Joshua as he desperately charges round a park in Boston trying to catch supper and not only failing miserably but knocking himself on a tree in the process.

It’s at this point that Silas Decker and Eloise enter the scene.  Decker is a vampire – again with a slightly different legend than what we’re probably used to.  Decker has been around for many, many years and at the point at which we meet him his life has definitely lost it’s lustre.  Living alone in a large delapidated house Silas is something of a hoarder and can barely get into most of the rooms of his home due to the clutter.  He’s lonely.  He lacks meaning.  And look, now he’s found a new puppy in the park!  Awww.  Of course, the puppy in the park, or Joshua, although in need of some guidance as to his new status, may also be in need of some much needed help – it’s almost like we have Scooby and Shaggy!  It seems that somebody is seeking our newly created Wolf.  Elise is a virtue.  She hunts evil and has an angelic sort of connection that helps her in this respect.  I’m not going to try and explain this in too much detail.  She believes.  It helps.  Eloise and Decker have a tentative, well, more partnership than friendship.  Decker comes in useful in a tight spot – being already dead and Eloise has access to all sorts of resources at her main home or HQ – a bit like a mission impossible agent.

At the same time we begin to learn something of the Wolves and this does make for some deep reading.  The wolf packs, headed by the Wolf King have a detailed history and I won’t give it away here.  The whole set up of the packs and their territories has been thought of in depth for the purpose of this story and whilst this might in some places make for a little more history at the expense of pace, it does also give a really good foundation for future books and is really worth it I felt.  Seth, the Prince of Boston, and his cousin Jack are having a spot of bother in a story that runs parallel to Joshua’s tale.  It seems that there is an attack underway on the Wolves and with the King being currently away on other pressing family matters this could be more serious than anyone first suspects.

This is a very satisfying read.  It has elements of fun to the story, even hints of romance, that help to temper the darker aspects a little and help to prevent the read becoming too severe and bloodthirsty.

On top of that I think the characters have been really well drawn and are easily to like.  We already have friendships building between the characters that seem to be leading to a bigger sense of family.

In terms of criticisms.  I wouldn’t say this is particularly fast paced in terms of the plot line but I found it an easy and well written story and I was always keen to get back to the story after I’d had to stop for whatever reason.

I would certainly like to think that there would be more books from the Black Wolves of Boston and our unlikely band of characters.  I’d like to see some of the relationships deepen and the family become more emotionally involved and I think there’s so much scope here with the groundwork already laid.

I hope for more. 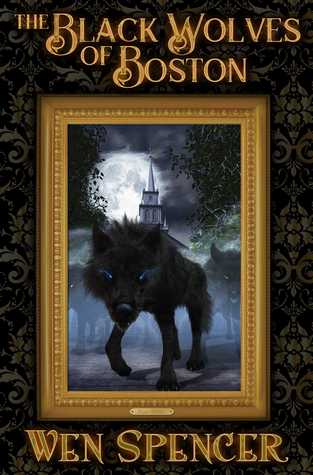