Miranda and Caliban by Jacqueline Carey
Published by Tor Books on February 14 2017
Genres: Fantasy
Pages: 336
Format: eARC
Source: Publisher
Thanks to Tor Books for providing me with a copy of this book in exchange for my honest review. This does not affect my opinion of the book or the content of my review.

Retellings are always tricky, because you’re dealing with the memories and emotions associated with reading the original source material, and they don’t always live up to readers’ expectations. But Jacqueline Carey did a bang-up job on this retelling of Shakespeare’s The Tempest, and I can’t wait for people to read this story. Even if you aren’t an expert on Shakespeare (I’m certainly not!), you’ll appreciate what the author has done: rather than rehash the story you may be familiar with, she’s set hers in the years leading up to the events of The Tempest. Carey’s writing closely mimics the style of Shakespeare, which some readers are going to love and others aren’t, but it was pure magic to me. What a lovely prose writer she is! Although the formal writing caught me off guard in the beginning, once I got into the rhythm of it, I couldn’t imagine this story being told any other way.

Miranda is only six years old when the story begins. She and her father live alone in a crumbling castle on a deserted island, with only animals and elemental spirits to keep them company. Prospero is a magician and has called forth these spirits and bound them with magic to do his bidding. Miranda has flashes of memories of a different life and remembers a grand home and kind women brushing her hair. But her father never confirms or denies these memories, and so Miranda believes them to be a dream. There is one other person on the island, a “wild boy” with dark skin who doesn’t speak. Prospero wishes to capture and civilize the boy, and one day he succeeds in bringing Caliban into their home, where he uses a hair from his head to create an amulet with which he can control him. Miranda sees this as an opportunity to finally have a friend, as she’s been all alone up until now, with only her stern and often cruel father for company.

Little by little, Prospero and Miranda teach Caliban to help them around the castle, hunting for food and performing menial labor. Miranda spends time teaching Caliban to speak, and they begin to communicate and form an innocent friendship. But although Prospero feels like he’s improved the “savage” Caliban’s life, Caliban understands that he is nothing more than a prisoner. One false move and Prospero can inflict great pain on Caliban by using the amulet that he wears around his neck.

Prospero is cunning and has a far-reaching plan, and one day he finally reveals the true reason for bringing Caliban into the picture. He wishes to free a spirit named Ariel who has been trapped inside a tree for many years, and the only way to do that is to discover the name of the demon that Caliban’s mother, a witch named Sycorax, used to magically imprison Ariel. Prospero suspects that Caliban knows the demon’s name, and he’s willing to do anything to get it from him.

But once Ariel is free, Miranda and Caliban soon realize that Prospero needs Ariel in order to exact his revenge. As childhood fades into bitter knowledge of the real world, Caliban begins to wonder if a world exists where he and Miranda can be happy together.

Miranda and Caliban is not a fast-paced, action packed story, so you should know going in that this is mostly an intricate character study. Jacqueline Carey is a genius at complex and layered characterizations and the emotional lives of those characters. The first half introduces the relationships between Miranda, Caliban, Prospero and Ariel—the four main characters—but it isn’t until the second half when the pace picks up and everything the author has set up in the first half comes together. It’s also a story of growth, and one of the joys for me was watching Caliban’s character grow and change as the story progresses. Miranda also goes through a lot, but I have to admit that Caliban was by far my favorite character.

Carey channels Shakespeare in many ways, and one of the best is her ability to get to the heart of the human condition and show some of the many ways people use each other to get what they want. Every character in this story is a victim of something. Prospero has been betrayed by his own brother, denied his rightful place in society and set adrift on a boat with three-year-old Miranda. Miranda is a victim of her father’s nefarious plans and has been kept in dark about everything. Ariel was imprisoned in a tree for many years, and when he’s finally freed he realizes he’s actually still enslaved by Prospero. And Caliban is a victim of his parents, and through no fault of his own leads a life that has been decided for him. Each one of these characters rebels against these injustices, some more successfully than others, and much of what I loved about this book was seeing how these carefully devised and subtle acts of defiance resolve themselves.

I don’t want to ruin the plot for anyone, but those familiar with The Tempest know just how this story will end. This is a love story between Miranda and Caliban, but it’s by no means a happy one. Caliban in particular suffers for his love, which is one reason I loved him so much. The story alternates between Miranda’s and Caliban’s points of view, and I loved seeing how the two start out as innocents but as the years go by, they learn mistrust and deception from the actions of Prospero and Ariel. Caliban’s chapters are heartbreaking, as he slowly begins to understand the lengths Prospero will go to for revenge.

This is also a coming-of-age story, as Miranda goes from six years old when the story begins to fifteen by the end. Carey pulls no punches when it comes to the big change in Miranda’s life, which Miranda herself calls becoming “a woman grown.” Word of warning if you’re squeamish in any way about a young girl starting her period: this is one of the harshest introductions into puberty that I’ve ever read (and yes, I would say it rivals Stephen King’s Carrie). Prospero hasn’t told poor Miranda anything about what to expect, and without a mother to teach her these things, it comes as a complete shock. Even worse, Prospero has a decidedly creepy interest in Miranda’s menstrual blood (which makes sense when you find out why, but still – ugh.) And with menstruation comes a sexual awakening, and Carey gives us a very honest peek into the mind of a young boy who has just discovered that his body can do, um, certain things.

As for the other characters, every story needs a villain and in this one it’s Prospero. I like to think that he does love Miranda, but despite his facade of being a good father and raising a kind and obedient daughter, lurking just under the surface is a man whose desire for vengeance has made him devious and cruel. And I’m just going to say one more thing about him: NO PROSPERO, NOT THE WHITE CHICKEN BIANCA! (I really did hate him.) Ariel could also be seen as somewhat of a villain, although I have to say I actually liked him. Yes, he lies and pits the characters against each other, but I felt sorry for him because of his past.

Near the end of the story, Carey brings in the main event from The Tempest as the climax of Miranda and Caliban. I thought it was a great way to tie the two together without too much repetition. And yes, the ending was bittersweet, but Carey manages to throw in a somewhat hopeful note. By the last page my love for Caliban had grown so much and I just wanted to give him a big hug. 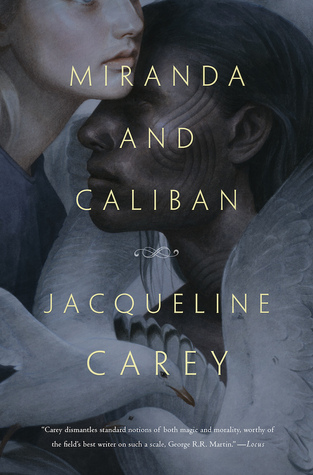