Everything Belongs to the Future by Laurie Penny
Published by Tor.com on October 18th 2016
Pages: 128

Everything Belongs to the Future is the debut fiction novella by renowned author and journalist, Laurie Penny. As well as her non-fiction books exploring gender, sexism and capitalism, she writes The Guardian, The Independent, Salon, The New Inquiry and many more.

Penny crams a decent amount of plot into not so many pages. We’re almost 100 years hence and the rich can almost literally buy time. Or rather an extension of life from the moment they take the medicine; a kind of ‘Fountain of Youth’ wrapped up in a blue pill. We’re in a divided England. The gaps between the haves and have-nots is wider than ever. Specifically, we’re in Oxford. A group of activists are living in a co-op house and are plotting against those who’ve been ‘fixed’. You see, the scientist inventor of this remarkable technology has fallen in with our perfectly representative house-mates. Nina and Alex, Margo and Fidget are the kind of activists that you’d imagine Penny might know in real life. Scruffy, punky, gender fluid and sexually diverse. Which is a good thing in theory but a little obvious from Penny. I’d have liked a little more stereo-type mould-braking.

Inventor Daisy, who is all but a child in an old body, has had enough. She wants to fight back and so when she meets our anarchists at a party they’ve crashed, she joins their cause. And they invent a timebomb. And they plan to set it off at the Big Event! But, one of their number is not who they seem and despite falling in love, must betray the group.

Pretty good story but to be honest, I’d have preferred it fleshed out into a full-length novel. I felt that that character development and the reveal of the betrayal plus consequences was a little rushed and quite under-developed. Without giving anything away, too much happens too quickly and like a cheap burger, left me wanting something more substantial after the initial hit.

There is a lot to like about Everything Belongs to the Future but the brevity of the story means that there’s no room for subtly or metaphor. This feels like Penny’s fantasy activist future. A cause that she’d like to fight. She would like our current situation of the power in the hands of the rich elite to escalate so she can be one of her characters and dramatically bring about revolution. It might be a bit too zeitgeisty for its own good, and might date quickly. I’ve not read much other science fiction where early 90s crusty-types persist into the future…but who knows, I guess. Science fiction isn’t about prediction, as such… And yet I admire and agree with the message of the story. It’s really good science fiction. A plausible premise. A divisive technology. A warning about our times. A little dystopic.

So what about the message? The rich have power and the poor have nothing? It is of course a truism and this might be a plausible extrapolation. Penny is right to highlight it, because in these troubled times, people need to understand the choices they make. People in power never represent the ordinary person, whatever they might promise. The problem with books like this is that they inevitably speak within an echo chamber. Despite being a fine piece of writing, I’m not convinced many outside the choir will be interested in the hymn sheet.

There’s nothing wrong with Penny’s writing. Her voice is strong. Her prose is enjoyable, well written and very readable. She can tell a story. Daisy is the best character, of course, with the most depth. She has so much riding on her moral choices. She knows her choices are monstrous. I think Penny almost gets it, but misses. Probably due to a combination of the strength of her personal convictions and the length of the story. I wish she’d taken more time and written something at least twice the length. I imagine anyone who didn’t have sympathy with Penny’s viewpoints would really take against this book. I enjoyed it for what it was, but would have preferred something greater.

Tags: Everything Belongs to the Future, Laurie Penny 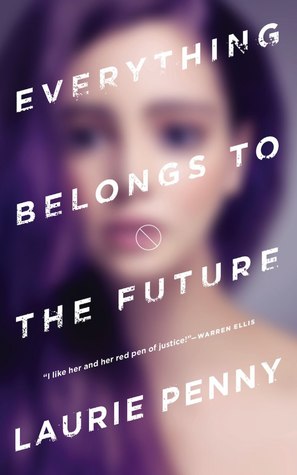