Six Wakes by Mur Lafferty
Published by Orbit Books on January 31 2017
Genres: Science Fiction
Pages: 400
Format: Finished paperback
Source: Publisher
Thanks to Orbit Books for providing me with a copy of this book in exchange for my honest review. This does not affect my opinion of the book or the content of my review.

I loved the premise for Six Wakes when it first made its way onto my radar, but I had no idea what I was in for when I started reading. This is one of those happy occurrences where the book was way better than I thought it would be. Mur Lafferty, welcome to my “must read” author list! I had so much fun with this story, and there were so many twists and turns, secrets and lies, and characters who didn’t even know whether they were lying or not. The entire story takes place on the generation spaceship Dormire, in very tight quarters, and revolves around seven key characters. Not only is this a top-notch science fiction story about cloning, space travel and a group of people forging their way into the future, but it’s a damn fine “locked room” murder mystery as well. This isn’t the first story I’ve read where a group of characters wakes up from some unknown event, only to discover they’ve lost their memories, but it’s definitely the best.

Lafferty takes the idea of cloning in a new direction and adds a political layer to her story that deals with clones versus humans. In the future, clones are commonplace but not without controversy. A deadly war between humans and clones resulted in a set of strict codicils being written to govern the existence of clones. Humans can choose to become clones, and most do so because they know they will live forever, their memories, knowledge and experiences being “mindmapped” every so often in order to preserve their essence. When a body dies, either by aging or more violent means, a new body is ready to be woken up, having been grown in a cloning vat. By uploading the mindmap of that person, the clone is ready to begin its new life, with all memories intact.

Aboard the Dormire, a crew of six clones is running the ship during its four hundred year journey to the planet Artemis: Katrina, the captain; Wolfgang, the second in command; Paul, the engineer; Hiro, the programmer; Joanna, the ship’s doctor; and Maria, the “girl Friday,” in charge of feeding and cleaning up after the crew. And running the ship itself is an AI named IAN. Resting in stasis are 2000 humans who will awaken when the ship finally arrives at the planet. But when the story begins, the six crew members have just awoken in new bodies, floating in zero gravity in the middle of a bloodbath. Several of their old bodies are riddled with stab wounds, and one of them appears to have hanged himself. Even worse, no one can remember what happened. Scared, confused and hungry, the six new clones begin to piece together the events that ended all their lives. With all 2000 passengers still in stasis, they realize that one of them must be the murderer.

But they soon discover there is even more to worry about. IAN is offline and the ship is drifting off course. The food printer has been sabotaged and is only printing poisonous hemlock leaves. And the worst news of all, the cloning bay has been destroyed and their mindmaps have been wiped. Unless they can get them working again, these could be the last bodies the six will ever have. In space, so many things can go wrong, and the crew of the Dormire is about to find out just how bad things can get.

Lafferty’s story is multilayered and intricate, and even though we do get lots of action near the end, this is primarily a story that is held up by characterization and psychological mystery. The author gives equal time to each of the six crew members, and the format goes back and forth from present to past to tell the stories of each one and how they came to be aboard the Dormire. I don’t want to give too much away, but I will mention that each crew member has a criminal history, and they’ve been told their crimes will be wiped clean if they agree to the mission. The caveat that keeps this idea interesting? No one knows that the others have been arrested or accused of various crimes. It’s a delicious set-up with so many possibilities, and Lafferty uses it to great advantage.

Maria is what I would call the “main” character, and ironically, she’s the crew member with the lowest standing, having been recruited to keep the ship clean and cook for the rest of the crew. But Maria is quite a complex woman, and as a clone she has lived many lives. I loved Maria’s resourcefulness, and as Lafferty slowly reveals her colorful past, she quickly became my favorite character. I also loved Hiro, the loose cannon of the bunch, who has a morbid sense of humor despite the fact that one of his friends most likely killed him.

There is an almost casual brutality to these characters, including Maria, because as clones they always have a new body on standby, and being in a dangerous line of work just isn’t a concern for them. After the terrible event on the Dormire, the crew members are facing real mortality for the first time ever. Six Wakes is suitably violent at times, and if you’ve ever wondered what it’s like to wake up in a room with five bleeding dead bodies in zero gravity, well now’s your chance to find out! I don’t normally get queasy when I read, but Lafferty’s descriptions of blood and gore floating around the room were almost too much for me.

The best part about Six Wakes—and trust me, there is so much to love about this book—is that the story did not go where I expected it to. Eventually the mystery of the murders is solved, but what happens after that discovery was brilliant. Lafferty draws surprising connections between her characters and it all seems to make sense in the end. The action scenes, which mostly take place near the end, are thrilling and cinematic, and I hope movie studios are paying attention because this would make a fantastic movie or TV show (and in some ways it reminded me of the grittiness of Battlestar Galactica).

If you’re looking for an exciting space adventure, with deeply developed characters, humor, emotion and an interesting take on the cultural and political ramifications of cloning, you won’t find a better book than this. Highly recommended. 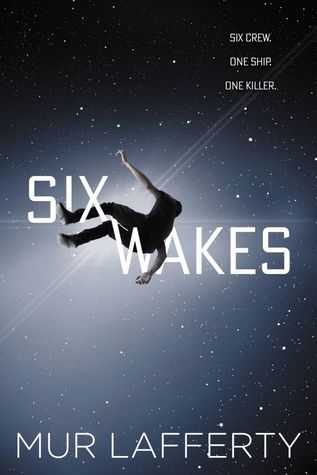