The Hanging Tree by Ben Aaronovitch
Series: Peter Grant #6
Published by DAW on January 31st 2017
Genres: Urban/Contemporary Fantasy
Pages: 336
Format: eARC
Source: Publisher
Thanks to DAW for providing me with a copy of this book in exchange for my honest review. This does not affect my opinion of the book or the content of my review.

After two years of watching the release date hover in flux and getting pushed back time and time again, I must confess waiting for this book was its own special kind of agony. That was also when I realized I was irrevocably addicted to Peter Grant.

The Hanging Tree is book six of the series which returns to London and places the main story arc back on track, following the short respite we took to the countryside with our protagonist in Foxglove Summer. The story begins with a drug-related death at a house party in one of the most exclusive residential areas in the city. Normally, the case wouldn’t have been within the purview of the Folly, which the Met’s investigative unit for all things magical and paranormal, except for the fact that one of the party goers turned out to be the daughter of Lady Ty, goddess of the river Tyburn. Suddenly, Peter is in a bind since he owes Lady Ty a favor, and as such he has reluctantly agreed to do all he can to keep her teenage daughter Olivia out of investigation. But as it turns out, his promise might be a moot point. After all, what do you do when the young lady in question is actually brazenly admitting to be the one who gave the victim the drugs which might have led to the fatal overdose?

Meanwhile, Peter and his boss Nightingale are also back on the trail of the Faceless Man, the main baddie of the series. Word on the street is that a rare book on magical properties has gotten everyone in the practitioner community in a tizzy trying to get their hands on it, including covert groups from abroad. Peter has reason to suspect that the Faceless Man has his fingers all over this one, but then there’s a lot going on here, including the fatal house party, Lady Tyburn’s daughter and the person she’s protecting, the mysterious book, a foxy thief, and the American agents who have suddenly shown up in town. Now Peter’s job is to find out how all of this is connected.

The Hanging Tree might not be my favorite in the series, but it was still very much worth the wait. For one thing, we come closer than ever before to finding out all the answers and discovering the whole truth behind the Folly’s greatest nemesis. In addition, a complicated figure from Peter’s past also makes a return bearing surprises for our protagonist. If you’ve been following along all this time, then this book is definitely not to be missed, especially in light of the significant revelations dropped on us in the latter half of the story.

That said, I also thought it fell short of being one of the best Peter Grant books because it had a lot less of the dry, sardonic humor which has always been one of the key hallmarks of this series. While still very enjoyable, this might be the first one that didn’t make me literally laugh out loud. There also wasn’t enough of Nightingale. What I wouldn’t give to see him kick some ass again in another epic wizarding duel, instead of just hearing everyone around him talk about it. He is like the Met’s secret weapon that gets waved in front of our faces a lot, but we hardly ever get to see him in action.

In terms of criticisms though, that was probably the extent of it, which made me very happy since I had such high expectations for this book. It wasn’t always fast-paced, but as far as police procedurals go, it had just the right amount of mystery, suspense, and action. The story had so many moving parts that Aaronovitch was constantly juggling and keeping aloft, I can’t say there was really much time for anything else. Still, we got to see a little more of Peter’s relationship with Beverly, and I’m also enjoying the larger role of Sahra Guleed, another police officer who is shaping up to be the perfect partner for Peter while the two of them are on the beat. They have a great working dynamic, almost like they are of one mind when they tackle everything from suspect interviews to Falcon raids, and I’m really hoping this is the first step to Guleed becoming a series regular.

The more urban fantasy I read, the easier it gets to spot if a sequel is “filler” or an actual book where “very important things” happen. The Hanging Tree, I’m happy to report, definitely belongs in the latter category. Don’t get me wrong because I loved the previous book which was a nice break from the hunt for the Faceless Man, but I’m also pleased that this one brings us right back into thick of things and resolves some of the questions left by the shocking events at the end of Broken Homes. This book is what I would call a real game-changer. While it did end rather abruptly, it’s clear that Peter and the gang will have to tread even more carefully going forward, and the next book should be very interesting indeed. Now if I can only survive the wait… 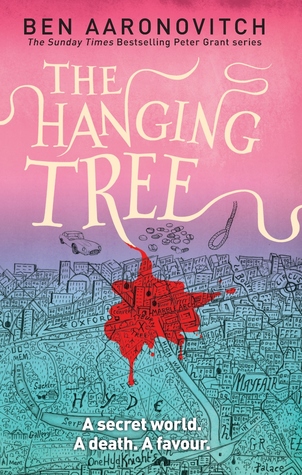