The Heart of What Was Lost by Tad Williams
Published by DAW on January 3rd 2017
Genres: Fantasy
Pages: 368
Format: eARC
Source: Publisher
Thanks to DAW for providing me with a copy of this book in exchange for my honest review. This does not affect my opinion of the book or the content of my review.

This was never going to be an impartial review. Tad Williams’s Memory, Sorrow, and Thorn novels are easily among my favorites in the genre. These fantasy novels are beautifully written, full of vivid and believable characters, and are truly epic in scope. It’s not an exaggeration to say I rarely pick up a fantasy novel without, on some level, wondering how it will compare to Williams’s series. I was therefore thrilled to learn that Williams would be returning to realm of Osten Ard with a new trilogy, the first volume of which will be published in April. Bridging the two series, this short novel (which apparently started out as a novella, but in typical Williams fashion, grew larger than originally planned) is set shortly after the events of To Green Angel Tower, the final volume (or volumes, depending on your point of view) of the original series.

So, perhaps inevitably, I loved this book, which is beautifully written and full of Williams’s trademark character development and nuance. It is, however, a small work, without any pretensions to the sort of world-spanning, epoch-changing scope of the previous novels. It’s also a fairly dark tale about war-weariness and despair. Everyone in this novel is beaten down and exhausted, sick of fighting, wanting only to go home while grappling with the knowledge that the very concept of “home” has been changed beyond recognition. The title refers to an ancient artifact, but it also serves as a guiding metaphor. This is a novel, first and foremost, about characters who mourn the things they love that are gone forever.

Duke Isgrimnur of Rimmersgard is the most significant returning character from the original books. Having lost his son and overseen numerous bloody battles, he is both desperate to see an end to war and dreading having to give the devastating news to his wife. Isgrimnur is less as a victor than a survivor – and one with more work to do.

As The Heart of What Was Lost opens, the Norns (for the uninitiated, think of them as something like dark elves) are in retreat, with Ineluki, the Storm King, dead and the Norn queen rendered comatose by her efforts to save her people. Isgrimnur leads a battle-weary army into the frozen north in an effort to wipe out this last remnant of the enemy. This is pretty grim stuff as, having previously fought to save the kingdom, Isgrimnur now fights to annihilate an already-beaten enemy. As far as he’s concerned, the job isn’t done until every last Norn is dead.

This seems may come across as cruel, but it is also understandable. Beyond the personal toll the war has taken, Isgrimnur sees the Norn’s attack on Osten Ard as cowardly and unprovoked, terrifying it its use of unfathomable magic. The Duke is now facing a diminished enemy, but given time, the Norns could strike again. Maybe because it’s the right thing to do, and maybe because he isn’t ready to face his wife, Isgrimnur presses on into a blighted wasteland hoping to end not only this war but the chance of any future war.

We also meet Endri and Porto, two soldiers in Isgrimnur’s army, who serve to give the reader a sense of how ordinary people experience the conflict’s larger-than-life events. These are probably the least interesting characters in the novel. Williams doesn’t spend a lot of time developing Isgrimnur, but readers of the original books can reasonably be expected to know and care about him. Endri and Porto, however, are new, but drawn with such thin strokes that they seem almost like stock types, easily transported from some other novel. We understand why we are supposed to care about these warriors, but we’re never given sufficient reason to do so. At best, they provide another version of Isgrimnur’s perspective: that war is terrible and costly even when it’s necessary.

Fortunately, sections with these two comprise only a small part of a story that is so often about competing and irreconcilable cultures, neither of which is entirely wrong in its hostility toward the other. We understand Isgrimnur’s hatred of his enemy, but we also understand what drives that enemy. To the long-lived and slow-breeding Norns, human beings are a scourge who have annexed more and more of their land over the centuries. What the people of Osten Ard saw as an wanton and evil attack, to the Norn was a desperate effort to wipe out an enemy that has been waging a slow genocidal war.

This ambiguity is part of what makes this word so interesting. Our gateway to the Norn perspective comes through Viyeki, an engineer in the Norn army who finds himself at the center of major events as his people take a series of increasingly desperate stands. In Williams’s original novels, the reader spent a fair amount of time with the Sithi, the less murderous cousins of the Norn, but this is really our first extended look at Norn society. Like the Sithi, the Norn are alien, driven by motives and desires that are not always understandable to human beings.

Even so, Viyeki is probably the most interesting of the three perspectives, in part because his efforts to find a place in his faltering and shifting society renders him inherently sympathetic. For a short novel, The Heart of what Was Lost has a solid number of surprises and reveals – some of which I suspect are setting up the conditions for the next trilogy – but much of the book revolves around plots and counterplots as various Norn clan, caste, and kin factions attempt to gain power. Williams conveys believably the strangeness of the Norns, but for all that, Viyeki is knowable and likable. Through him we see how major political events take their private and personal tolls.

The novel’s jacket copy describes The Heart of What Was Lost as the “perfect introduction to the epic fantasy world of Osten Ard,” but I would strongly disagree. I’m not sure if new readers, unfamiliar with the larger context, would find the story’s small and relatively confined conflicts all that compelling. I would be much more inclined to urge new readers to start at the beginning with The Dragonbone Chair. For those who read and enjoyed the original trilogy, The Heart of what Was Lost is a welcome return to familiar world and a tantalizing appetizer while we wait for the main course. 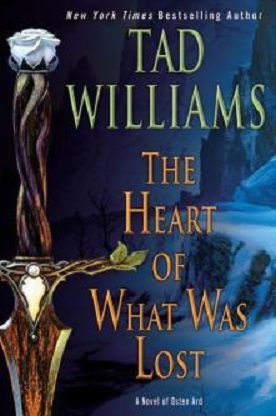