The Massacre of Mankind by Stephen Baxter
Published by Gollancz on January 26th 2017
Genres: Science Fiction
Pages: 464
Format: eARC
Source: Publisher
Thanks to Gollancz for providing me with a copy of this book in exchange for my honest review. This does not affect my opinion of the book or the content of my review.

They don’t give up, those Martians. Both in fiction and in our cultural consciousness, HG Wells’ invaders from Mars are persistent. Stephen Baxter now carries the torch in The Massacre of Mankind; the official sequel to The War of the Worlds, some 119 years later. Wells’ novel, published in 1898 was actually set in 1907. Baxter brings us at first to 1920. The Martians are long gone, but there are some familiar green flares seen coming from Mars…

Meet Julie Elphinstone. A suffragette and journalist who is the sister-in-law to the original novel’s narrator. The story is told from a number of different perspectives, as reported to Julie at some time later than the events of the plot. England has moved on from the original attack, and is almost a dictatorship. The Great War hasn’t happened. The left Martian technology has changed the world. But now, the Martians are coming back and not just 10 cylinders this time. And they’ve learned their lessons about earthly bacteria. Again, the first wave lands in England; north west of London this time. They aren’t here to destroy, but to farm. They bring with them humanoid Martians and also semi-aquatic Venetians (who, I wonder, might come from the imagination of CS Lewis – they are similar to those from Out of the Silent Planet (1938)). The story of the solar system comes into play and we learn there are also an older race of Jovians.

One interesting thread about The Massacre of Mankind is that it is populated by many of the characters from the original, now given names. The narrator is Walter Jenkins, who is generally described as unreliable. His book was published as the Narration and features the likes of the Artilleryman – who is called Albert Cook. Most of the characters we meet aren’t happy about how Jenkins portrayed them. I wonder what Wells would have thought?

There are plenty of nods and references for the reader early on, bringing them on board with this story. But it takes a while to get going. In a universe most interested readers will be familiar with, there’s a lot of world-building – getting us up to speed on the consequences of the first invasion. Plenty of backstory for the uninitiated I suppose, as told reportage style as Julie and other characters move about England and Berlin, which is now perhaps the top global city. Wells’ book was a personal account of a small-scale battle – despite the title. It all takes place in a narrow corridor from Surrey to London. It might be seen as a reflection on Britain’s battles with the likes of the two Boer nations in South Africa when Wells was writing it. The Massacre of Mankind is a global war seen through many eyes. Indeed, once England is ‘secured’ by the invaders and the rest of cylinders are launched, Julie explains stories she’s been told from the US (New York and LA), Durban, Berlin, Melbourne, Constantinople, St Petersburg and more.

Baxter has some great ideas and some of the sub-text is interesting. He addresses civil liberties in the time of war. He talks about evolution and knowledge. Maybe the Martians deserve to live as much as humans do? There’s plenty about genetics and the morality of science and war. This is great science fiction. About something real and relevant today. My problem, however, is simply the pace of the story. Now Baxter is a fine storyteller. There’s an awful lot to balance here. He gets the nods and style correct. I loved the reference to Grovers Mill. He plays the characters off each other with ease. He uses very clever literary techniques when the story moves from Julie’s point-of-view, and when also referring to events in future, after the invasion is over, for example. The writing seems effortless and the scenes are quite hard-hitting in places (the Martian’s captured humans for example). It’s just everything takes so long. There’s so much detail, as Julie or the others describe landships and compounds and journeys and all sorts… Not all that necessary to the plot either. The journey from Berlin back to England via the North Sea is convoluted and doesn’t add anything, for example.

There’s a great deal to enjoy here, especially for fans of the original, and of classic science fiction. I don’t think this will appeal to anyone not already familiar with Wells’ universe. But then I’m not sure that is Baxter’s intent. And what of the title? It does of course, provide another link to Wells. It is the fear that this might be the long term fate of humanity now they know their place in the evolution of the solar system. A quite chilling prospect.

The biggest stars in the world have tackled the Martians. From Orson Wells to George Pal to Jeff Wayne and Richard Burton, to Tom Cruise and Steven Spielberg. Baxter is indeed a star of the science fiction world (and of course wrote the official sequel to Wells’s The Time Machine too, back in 1995 – The Time Ships) and he has definitely carried through the cultural aspects of Wells’ creation. He’s nailed the writing and the characters while moving the myth of the Martians into a believable direction. As a novel, however, just too long, too ponderous and not terribly exciting. 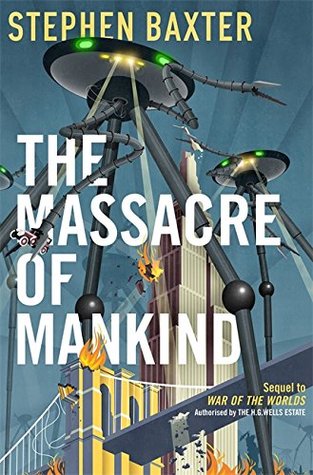