The Burning Page by Genevieve Cogman
Series: The Invisible Library #3
Published by Roc on January 10th 2016
Genres: Fantasy
Pages: 336
Our reviews of this author: The Lost Plot
Source: Publisher
Thanks to Roc for providing me with a copy of this book in exchange for my honest review. This does not affect my opinion of the book or the content of my review.

I started the Burning Page by Genevieve Cogman (the Invisible Library #3) expecting it to be the final in series so I’m really over the moon to have discovered that a further two instalments are in the offing.  I’m loving this series so far and just as this is predominantly about a library that can open doors to an infinite number of realms I think this series also holds the possibility to an infinite number of exciting storylines and settings.  Libraries, librarians, dragons, fae, chaos, dastardly baddies, and a Sherlock-Holmes-style detective all thrown into the mix equals an excellent read for me and for you too I think.  Obligatory spoiler warning – if you haven’t read the first two books in the series this review may contain spoilers.

Following Irene’s adventures in the last book (The Masked City) she (and her apprentice Kai) are now in the naughty corner so to speak.  They are still working from the alternate Victorian London where Irene has been made Librarian in residence but they’re being given some of the less desirable jobs as a form of punishment.  Anyway, as the story begins Irene and Kai are making a hasty departure from one possible version of Revolutionary France when they’re confronted with a major problem.  The portal they intended to use has just gone up in flames and their pursuers are in hot pursuit (literally).  Escaping over the French rooftops on the back of a dragon (did I mention that Kai is a dragon) that has just exploded out of the roof of a burning building certainly makes for a dramatic escape to say the least and rather sets the tone for the rest of the story.  Anyway, returning to the Library it seems that this problem is being experienced far and wide. Portals everywhere are being eliminated, librarians are dying and it seems that the traitor Alberich is responsible for the chaos.  He has issued an ultimatum to The Library to give up or be destroyed.  All is not yet lost and Irene and Kai are sent to retrieve a book from The Winter Palace in St Petersburg – a book that will hopefully help to restore order.

This series is such incredible fun that I just really look forward to the next instalment.  Yes, there’s no shortage of urban fantasy but any series that comes along and brings something a little different definitely ticks the boxes for me.  I mean, firstly, we have Irene.  She isn’t some sort of ninja, she makes mistakes and has terrible arguments with herself about the rights and wrongs of certain decisions before she makes up her mind – but this is why I like her.  She isn’t perfect and although she has a very good grasp of the magical librarian language it doesn’t mean that she gets out of every situation easily.  Secondly we have these wonderfully creative scenes where Irene uses her magical ‘librarian’ speak to escape situations in ways that you would never have thought of.  Thirdly we have infinite possibilities for the ultimate in travel settings combined with any number of fantasy creatures to become involved which makes the stories rife with possibility.

In terms of the characters.  Well, obviously we have Irene, I think she’s a great character.  Perhaps it’s because she’s all bookish and just loves the printed page.  Like a lot of bookworms she can be a bit standoffish and admits to not enjoying social situations – so of course you can’t help forming an attachment to her really –  although I don’t think it’s simply that.  She definitely has strength of character, she’s not shy about putting her own ideas forward when it comes to anything relating to books or the Library, she has a quite ‘proper’ way of behaving but isn’t completely bounded by rules of etiquette and will break them if the results are likely to be favourable and on top of that she isn’t some fainting ninny waiting around to be rescued.  That’s not to say she doesn’t sometimes need help but just she uses her own resources first.

Then we have Kai.  I can imagine many ladies loving this character.  He’s terribly handsome and has that casual nonchalance that being brought up with power and privilege bestow upon a person.  He radiates charm and authority and although he is still relatively young in terms of his dragon abilities the fact that he is royalty carries a lot of additional strength.  What I like about Kai is that he doesn’t monopolise the storylines, he’s very defensive of Irene and since their exploits in book 2 he is maybe a little over protective and possibly a little bit smitten but those things don’t drive the story, they’re just background elements that all add to his character.

Detective Vale is the would-be-Sherlock of the piece and whether you like it or not you can’t help but like his surly behaviour.  Unfortunately, his involvement in Irene’s last escapades have left him in a bad way.  His involvement in the world of fae has left him a little ‘chaos’ soaked (for want of a better word) and Irene, feeling incredibly guilty over involving him in the first place, feels responsible for finding a cure for his ever worsening condition.

On top of this we have a couple of fae – both are just wonderfully deceitful and ooze casual boredom.  You can’t trust them at all – or in fact maybe you can trust them, to behave exactly how you expect but can’t believe.

Anyway, on top of the plot and all the lovely characters, we have tigers and bears (oh my), lots of insects – most of them not ones you would want to pop out from under your pillow! Snakes and other crawling and highly venomous ‘things’ coupled with explosions, burning buildings, toppling staircases and a rather dramatic finale.

In terms of criticisms, the only thing I could say, if you were to absolutely force me, is that the ending did seem a little abrupt.  But, as I know I have two further books to look forward to I really don’t mind that one bit.

In case I didn’t make it obvious.  I’m loving this series.  It brings a wonderful alternative period feel to it without being over starched.  It’s fun.  It’s packed with chaotic and dramatic adventures and is witty to boot.  Why wouldn’t I love that! 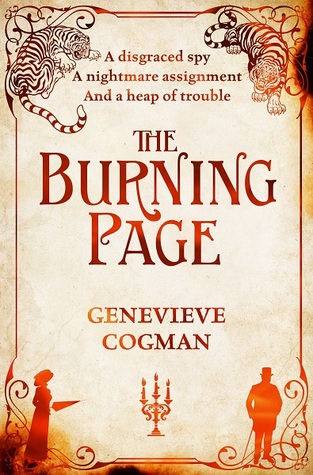