Dragon and Thief by Timothy Zahn
Series: Dragonback #1
Published by Tor Books on October 25 2016
Genres: Science Fiction
Pages: 256
Format: Finished paperback
Source: Publisher
Thanks to Tor Books for providing me with a copy of this book in exchange for my honest review. This does not affect my opinion of the book or the content of my review.

I do love when publishers decide to re-release older books in order to make them available to a new audience, and when I heard about Dragon and Thief, a book originally published in 2003, I thought I’d give it a try. I’m embarrassed to admit I’ve never read Timothy Zahn before, and this seemed like a great opportunity. Dragon and Thief is the first in the Dragonback series, and I’m assuming if this does well, Tor will continue to publish the series. My reaction in three words? Cute and charming. Although I have seen the “young adult” moniker floating around, I feel this book falls firmly in middle grade territory, and I wouldn’t hesitate to recommend it to kids ages ten and up. Which was slightly problematic for me, because this story felt very young. There is absolutely no swearing, very little violence, and the dialog felt a bit old-fashioned to me (Jack uses expressions like “I will be dipped in butter” a lot). These things aren’t bad, don’t get me wrong, I’m just saying perhaps I wasn’t the best audience. But despite that personal drawback, Dragon and Thief is full of cool ideas, interesting relationships, and best of all, an awesome heist story. Oh, and did I mention it takes place in space?

Jack Morgan is a fourteen-year-old boy, on the run after being framed for theft. He’s hiding out on a planet in his ship the Essenay, hoping to come up with a plan to clear his name, when a fight erupts in the skies above, forcing one of the ships involved to crash-land on the planet’s surface. When Jack goes to investigate, he gets more than he bargained for. The lone survivor is a dragon-like creature called a K’da, an alien species who must live symbiotically with a host in order to survive. Jack gets the surprise of his life when Draycos, the K’da, asks if Jack will agree to be his host, since the K’da can only live without one for several hours, and his host is now dead. Not quite understanding the ramifications, Jack agrees, and before he knows what’s hit him—literally—Draycos has melded right into Jack’s skin, forming a dragon shaped tattoo across his back. Draycos can emerge from Jack at will, and it turns out he’s an amazing fighter, but Jack knows his new friend is going to take some getting used to.

Draycos explains to Jack that someone is out to destroy his people, along with a species called the Shontine who usually act as hosts to the K’da. The two make a bargain. Draycos will help Jack clear his name, if Jack will help him save the K’da and the Shontine from destruction. It’s a tall order, but Jack’s up for the challenge.

There is a lot to like about this story. First of all, I loved the relationship between Jack and Draycos. Jack is a fairly surly teenager and goes through most of the story annoyed with his new companion, but that made things more interesting.  Draycos is unfamiliar with human ways, and his innocence was charming, even if Jack didn’t think it was. But after a few demonstrations of Draycos’ fighting skills, and after he gets them out of a couple of tight spots, Jack reluctantly agrees that it’s not such a bad thing to have a dragon watching your back—while he’s on your back! I do have to admit that I struggled a bit with the mechanics of exactly how Draycos merges with Jack. Zahn explains things pretty thoroughly, and yet I couldn’t quite grasp it. I guess it’s one of those situations where you have to just let it go and enjoy the story without over-thinking things.

My favorite part of the story involves Jack’s “Uncle Virge,” and I don’t think it’s a spoiler to tell you this because it is in the blurb on the back of the book. We learn after about fifty pages or so that Uncle Virge, who Jack has been conversing with while on his ship, is actually dead, and he’s turned his personality and wealth of knowledge into a virtual identity, a voice that helps Jack run the ship and even survive. Uncle Virge is also Jack’s little secret, since the men chasing him have no idea he’s dead. It makes for a wonderful cat and mouse scenario, and when Jack is captured and is forced to steal something, Uncle Virge plays an interesting role in helping him out.

My only issue is some rather blatant info dumping, in the style of “I’m an alien from another solar system and I don’t know your Earth ways, why don’t you teach me?” It’s a little too convenient that Draycos really doesn’t understand how to behave around humans, and so it falls to Jack to explain things. I suppose a middle schooler might not catch on to this rather obvious trick, but it was laughably clear to me, unfortunately. Luckily the book is short enough that there aren’t that many things at this point in the story that Jack needs to explain.

Dragon and Thief ends abruptly, more in the manner of a serialized story than a true series. A quick check on Goodreads shows that there are five more Dragonback books, and if Tor aims to satisfy readers, I hope they’ll continue to publish the other five volumes in quick succession. For preteens especially—and for those adults who are young at heart—this book is really quite fun, and Zahn manages to slip in an important and timely message: it’s best to do the right thing, even when it makes you uncomfortable. 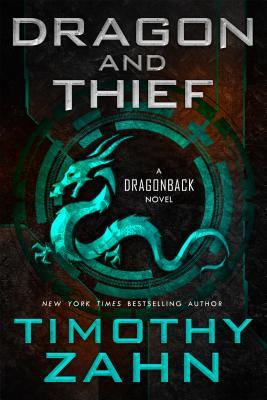