The Last Days of New Paris by China Miéville
Published by Del Rey (Random House) on 8/9/16
Genres: Fantasy
Pages: 176
Our reviews of this author: This Census-Taker
Format: Audiobook
Source: Purchased

“The purest surrealist act is walking into a crowd with a loaded gun and firing into it randomly.” – Andrė Breton

The Arc de Triomphe secretes urine and the Eiffel tower floats on no grounded support. The mechanical elephant Celebes, once only a famed surrealist art piece, travels in occupied Paris and not alone. Manifestations of surrealist artwork, both famed and unknown, fight the Nazi occupation along with what is left of the resistance. “Liberation was fucked up,’ according to protagonist Thibaut. And that is before the reluctant forces of hell are thrown in.

China Miėvelle is always ambitions; as one of the leading names in New Weird his works always live up the genres’ name. His writing will make a reader work and having Wikipedia, the dictionary, and possible a Harvard English professor around wouldn’t hurt when reading. Yet despite the absurdity of the premise, the Easter eggs of surrealist works most have never seen nor heard of, and an author secure in the knowledge that he is the smartest person in the room his works are surprisingly accessible. Last Days of New Paris is no different. A reader doesn’t need to know anything about surrealism to see this new Paris; in fact one may be better off visualizing each manifest their own way.

The story follows two timelines, before the ‘S-blast’ that turned Paris upside down and after. The before story line is fine; a background leading up to the world changing event. It also lays the ground work for the latter timeline’s Checkhov device; an item Thibaut comes across early. But it is Thibaut’s story that shines. His background comes out slowly, naturally, as he responds to current events that change his path. After meeting with Sam, a mysterious woman with her own agenda, he is drawn into a fight against what appears to be the Nazi endgame for Paris. The Fall Rot plan is a combination of science, manifestation research, and a possible pact with hell. Thibaut, Sam, and a manifest Exquisite Corpse will prove to be crucial to the future of New Paris, a city living in hell yet still worth saving.

It is of course the imagery of the setting that drive the book, as should be expected in a book about live surrealism. Thibaut is an interesting character and well established by the end of the book but will not stick in many minds long term. But the living art, be it researched by a reader or left to the imagination, is sure to be remembered with Miėvelle’s descriptions backing them. At times beautiful, haunting, or just plain horrifying; even the daemons go against anything seen before, scary and dangerous yet tragic characters in their own.

Start to end Last Days of New Paris captivates. While the very nature of the plot may cause some to back off in fear it really shouldn’t; the short length and constant movement make it as accessible as anything the author has done. Even the afterword is captivating; a chance for the reader to dig through the ideas that influenced the various manifestations seen throughout the book. While it is doubtful that Last Days of New Paris will overtake The Scar on readers’ best of lists it is a very worthy addition to the authors bibliography. 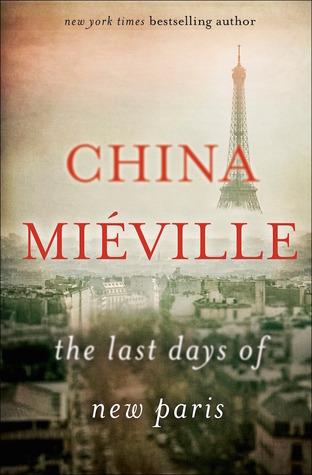