Extreme Makeover by Dan Wells
Published by Tor Books on November 15th 2016
Genres: Science Fiction, Thrillers
Pages: 416
Format: eARC
Thanks to Tor Books for providing me with a copy of this book in exchange for my honest review. This does not affect my opinion of the book or the content of my review.

“Never sell a cure when you can sell a treatment,” says one of the more unpleasant pharmaceutical executives at the center of Dan Wells’s new novel, Extreme Makeover. “A magical lotion that protects you from heart disease is great for you, but then what do we sell you in the next fiscal quarter?” This sort of cynical thinking is at the core of this very enjoyable novel, often operating in the classic social-satire mode of science fiction. A book about the destructive impact of short-sighted corporate greed is, of course, gunning for both a worthy and a slow-moving target, and if Extreme Makeover doesn’t say anything we don’t already know about the destructive power of unchecked capitalism, it provides an entertaining and clever scientific premise to justify its potshots.

The story centers around the pharmaceutical and cosmetic company, NewYew, and its underachieving and underappreciated head scientist Lyle Fontanelle (who, if you doubt his nerd creds, wants to change his business cards to read “Chief Science Officer”). Fontanelle may be the perpetual office whipping-boy, and a socially-awkward older man who pathetically moons after his college-aged intern, but when it comes to science, he’s the real deal. He’s developed a new anti-aging skin cream that he believes will revolutionize the market.  Rather than making skin appear younger, it transforms older skin cells into younger ones by manipulating the user’s DNA.

The rest of the NewYew’s hard-bitten executive team may consider Fontanelle a joke as a human being, but they’re excited about the product’s potential – so much so that they are eager to aggressively mislabel the treatment so they can avoid all that pesky government regulation. After all, that would only interfere with the public’s access to an experimental and poorly-understood genetic process. A big company avoiding the rules in order to make money? What could go wrong? No surprisingly, a great deal, particularly since each chapter begins with a countdown to the end of the world.

It turns out Fontanelle’s skin cream changes not only the users’ appearance, it alters the whole of their genome, turning them into entirely new people. Some users suffer rather serious side effects – for example: death – while others merely experience weeks of flu-like symptoms. At the end of the process, these people have entirely changed their appearance. To a company like NewYew, run by corporate rapaciousness and unhindered by any sense of responsibility, the potential for this product – branded ReBirth — is nearly limitless. People can change identities completely and become identical to actors, models, or athletes.

Meanwhile, there are other forces out there who see a different sort of potential for ReBirth and will stop at nothing to get their hands on it. The dark political types aren’t any less worried about the health risks than are the corporate types, but the reader – even without the help of the end-of-the-world-countdown – can see that this is going nowhere good.

To give more of the plot away would be a disservice. Wells often unfolds his story like a traditional thriller, which means there are lots of unexpected turns, as is only fitting for a story in which anyone can be made to look like anyone else. All of these developments were believable and satisfying, as is the way in which the world ultimately falls apart. I didn’t always understand the science, but I felt that Wells did, and I was often happy to let the details wash over me.

The only significant problem I had with Extreme Makeover came from the somewhat bumpy efforts to combine social satire with science thriller. Both elements worked well, but they don’t complement each other. Watching self-important corporate stooges endanger the world in order to turn a profit is fine for a satire, but the un-self-conscious shallowness of these characters sometimes made them hard to take seriously as actual people.

Thrillers depend on characters behaving believable in intense situations, but Wells’s characters tend to shoot from the hip and worry about consequences later. With billions of dollars on the line, it’s entirely credible that the executives at NewYew would take shortcuts and risk the public’s health. It’s less likely they would do it in ways that could land them all in hot water, and fairly quickly. It is conceivable that a company might be able to launch a product like ReBirth without the government knowing what the stuff actually does. It seems less likely that it would be allowed to remain on the market for more than a few days before the whole scheme came apart.

I also found it improbable that these executives would fail to think through the legal and commercial consequences for ReBirth’s users – consequences that would soon eclipse the excitement of total body transformation. These people are so focused on the marketing value of giving consumers new genes that they fail to think about what it means for people to change physical form. It might be a fantasy for the average person to look like a movie star or an athlete, but that fantasy would become a nightmare when the customer can suddenly no longer prove his or her identity. Traditional IDs, fingerprints, or even DNA testing would become meaningless so while you might look like you belong on the cover of a magazine, mundane activities like applying for a mortgage, traveling on a commercial airline, or renewing your driver’s license would become impossible.

Again, if the book had remained in the realm of satire, this sort of nitpicking would be pointless, but because Wells often places us into thriller mode, it is sometimes distracting that many of the most obvious implications of the story’s core technology don’t seem to have occurred to anyone.

I was also a little unsatisfied with Fontanelle as a central character. As a passive victim, events tend to happen to him rather than because of him, which can slow the story’s narrative drive. The first third of the book moves along with lightning speed, but things get bogged down a bit in the middle, and in the final third, when events become quite dire, we’re asked to worry about characters we’ve spent a long time finding laughable or contemptible.

These are ultimately quibbles, however. Extreme Makeover is a fun, fast book, and Wells is a delightful stylist who knows how to hook a reader’s interest from the first pages. While some of the social implications of ReBirth may have been glossed over, the biological consequences are an endlessly entertaining puzzle box of possibilities. The end of the world, when it comes, is brutal, terrifying, insightful and fascinating. Wells’s novel makes it worth the wait. 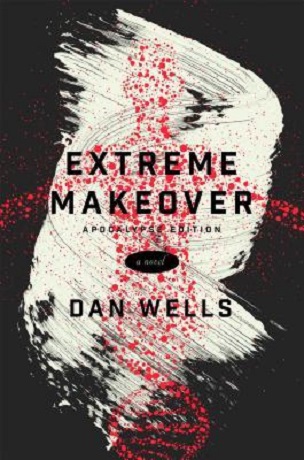