Europe in Winter by Dave Hutchinson
Series: Fractured Europe Sequence #3
Published by Solaris on November 3rd 2016
Genres: Science Fiction, Thrillers
Format: eARC
Source: Publisher
Thanks to Solaris for providing me with a copy of this book in exchange for my honest review. This does not affect my opinion of the book or the content of my review.

The fractures are becoming kaleidoscopic in the third instalment of the Fractured Europe sequence. University intelligence man Rupert is now settled in Europe and working as an agent for Rudi; former chef Rudi is trying to work out who is behind a string of terrorist attacks; and who knows what the Community – or the Coureurs – are really up to… Be warned, this is not a book you can make any sense of without having read the previous 2 instalments (Europe in Autumn and Europe at Midnight).

If the first two novels in the Sequence were companion volumes exploring post-EU Europe and the mysterious Community, Europe in Winter embraces the brave new world of open borders. The action – and there’s a lot of it – is split between Rudi, still doggedly trying to work out what the hell is going on, and a string of new (largely one-shot) characters who introduce us to the various new developments first hand.

We begin with a disaster: an attack on the Line that cuts the belligerently transcontinental railway somewhere just north of Kazakhstan. We see it first hand, but we get no clue to motive – or to who is behind it. Other operations follow thick and fast – a woman on a trip to Luxembourg to try and make contact with an informant about the Community; a confused sniper on a deadly mission to Siberia; a Coureur exposed and arrested at the Hungarian border; a whirlwind tour of the Warsaw underworld. Meanwhile, nations and corporations fall over themselves to capitalise on exciting new market opportunities in the Community. Constant character hopping allows rapid plot development, but you never really get to know anyone.

Thankfully, Dave Hutchinson invests his disposable POVs with a lot of charm and/or pathos; I found myself rapidly sucked into each situation (not Situation – for those familiar with the Fractured Europe sequence, the difference is important) and generally sad that I wasn’t going to be visiting with most of these characters again. It was a delight to see that at least naive, headstrong Gwen would be a recurring character, another stray adopted by Rudi.

However much I liked the characters, I found the narrative itself unforgiving: as a reader, you focus to stay afloat or you drown in extraneous detail. There are no refreshers and few second chances for those with poor concentration spans, making me intensely thankful I’d read the 3 books close together. I eventually reached the disheartening conclusion that while I had a grasp of what had happened, I had little idea what was going on. But that’s okay – there are clues scattered throughout the novel that this is pretty much exactly what Hutchinson had in mind.

Rudi smiled at him.

“If you think that sounds confusing, you ought to spend half an hour as me.”

The final act revelations are little short of mind-bending, both in terms of plot developments and insights into who the actors on this densely-populated stage really are. By the time Rudi asks – politely – for the villain of the piece to succumb to temptation and do some monologuing, I was desperately grateful to have a few details cleared up.

Satirical and demanding from start to finish, Europe in Winter is an elegant demonstration of its own themes: that life never ties things up neatly; that nobody ever gets to see the whole story; and that in life the story never ends, just branches off into infinity. It’s all terribly clever if more than a little frustrating, being somewhat overpopulated by Capitalised Factions that end up being difficult to keep separate.

As ever, Hutchinson captures the world-weary air of the old-fashioned spy thriller with aplomb: I could shoot you, old friend, but lets have a beer instead. Tell your employer I’d like to slip polonium in his tea. At the same time, he’s quick to point out this time that the window dressing is nothing more than Coureur romanticism, a borrowed suit of fictional charm to dress up an organisation that started out as an amoral gang of human traffickers and one that is still largely funded by criminal endeavours.

This open-eyed cynicism extends across the board: the Community – which I still find a painful concept in our post-Brexit world – is an idealised, authoritarian England that has cheerfully written Europe out of its pocket universe. No more messy borders or foreign languages; even the landscape has been Anglicised by its toffee-nosed creators. The food is boring and the healthcare is basic, but the flowers are nice. The Directorate exercise ruthless control to erase regional identities and keep its citizens in line, and are prepared to use nuclear and biological weapons on external threats. It’s hard not to read it without glancing askance at our own headlines. And that’s before Dave Hutchinson turns his steely-eyed gaze onto the powers that control Europe.

If you’re hoping for a happy, positive look at the future, Fractured Europe is not the place to start. But it’s a masterful bit of writing and plotting, and by putting idealistic Rudi at the centre of it all (a man who will deploy basic courtesy to try and rescue the worst sort of situation), it somehow retains a warmth I find deeply compelling. Europe in Winter may be my least favourite book in the sequence so far, but please consider that faint criticism rather than faint praise – it’s blisteringly good. 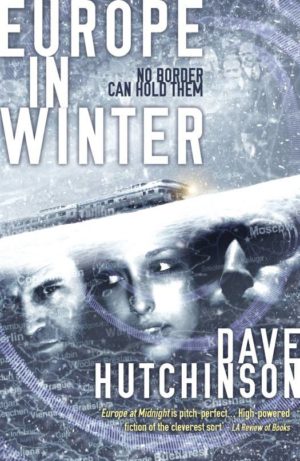