Congress of Secrets by Stephanie Burgis
Published by Pyr on November 1st 2016
Genres: Fantasy
Pages: 340
Our reviews of this author: Masks and Shadows, The Underwater Ballroom Society
Format: eARC
Source: Publisher
Thanks to Pyr for providing me with a copy of this book in exchange for my honest review. This does not affect my opinion of the book or the content of my review.

Having fairly recently read and enjoyed Masks and Shadows by Stephanie Burgis I had no hesitation at all in putting in a request for Congress of Secrets.  This book definitely does not disappoint and in fact I personally enjoyed it even more than Masks and Shadows.  Using real historical events and people Burgis once again brings to us a story that weaves together magic and mystery in a most compelling way.

The year is 1814, Napoleon has fallen and the Congress of Vienna is being hosted by Emperor Francis.  A meeting of nobles, ambassadors and royalty with all the ensuing pomp and ceremony that such an occasion would herald.  Negotiations for territory are the main order of the day while behind the scenes Vienna is held in the grip of fear, political speech is restricted, secret police maintain strict control over the general populace and dark alchemy is being practiced in the most unexpected places.

This really was a good read.  I love this author’s style of writing.  She really can set a scene and make it appear effortless.  I like how she builds her characters and I think she hits the nail spot on in terms of cutting back and forth between characters to create the maximum tension.

At the heart of this story there are two main protagonists.

Caroline Wyndham is a British noble, intent on meeting the Emperor and offering financial assistance to help him make this Congress an overwhelming success.  In reality Caroline was actually born Karolina Vogl.  Years before her life was torn apart when her father was arrested by the secret police for sedition and though she was herself taken into captivity at a very young age she subsequently escaped and managed to establish a new life for herself.  Twenty years later she has returned, desperate for news about her father.

Prince Kalishnikoff of Kenova is attending the Congress to seek reparation for the loss of his lands during the recent conflicts.  In truth he is a charming con artist named Michael Steinhüller.  In a strange quirk Michael was perviously a young apprentice to Karolina’s father and the two have not seen each other since the night of the arrest.

The two of them are about to once again meet and they’ll need to keep their heads and their minds focused as their incredibly risky plans become inextricably entwined.

I really enjoyed this story.  It’s a wonderful period drama with an intriguing plot, dark magic and a very subtle romance.

Firstly to the characters.  Karolina and Michael are very well developed, probably Karolina a little moreso than Michael.  Their back stories are only slowly revealed and make for very interesting reading – I won’t go into the ins and outs of them here other than to mention that Karolina seems to have suffered a rather horrible childhood of captivity and torture until her eventual escape.  Michael has spent his time going from one con job to the next, relying on his charm but always in the realisation that he can only continue in this vein for so long and becoming desperate to find the perfect job that will enable him to quit.  The other key players are the Emperor, an ambitious man who seeks power and wealth and doesn’t mind how low he needs to sink in order to achieve it.  His head of Secret Police is Count Pergen, a dark and twisted character who has practiced such dark alchemy that his very soul seems to have been consumed.  We also have the involvement of a travelling theatrical company led by the young Peter Riesenbeck – another character who longs for success and hopes to stage his next show at the Congress.  Unfortunately Peter unwittingly falls foul of the secret police and becomes embroiled himself in a desperate situation of life and death.  My favourite of the piece was probably the wily Prince de Ligne.  He doesn’t play one of the main roles but nonetheless he’s a great character.  An older man of notoriety, now fallen on slightly harder times due to a disagreement with the new Emperor.  I liked him, he’s one of those characters that feels trustworthy and fatherly and I couldn’t help thinking that he would come to the rescue somehow.

In terms of plot.  There’s plenty going on here.  Political intrigues, two people trying to pull their own perfect con job.  A travelling troupe with an ambitious manager and an Emperor who desires power.

In terms of criticisms – well, only a couple of small ones, observations really more than criticisms.  Being the second book I’ve read by Burgis I would say that she is great at writing historical novels that twist the real and the fictional into a compelling read.  I’m not quite sure that this particular story needed the dark alchemy although it did add the notes of fear and tension – I just wonder if the thought of capture, arrest and torture might have stood just as well – that being said, I do love reading a bit about alchemy and it certainly seems to fit well in a period novel.  The other point that I did struggle a little bit with was Karolina’s reason for the visit – I found it difficult to believe  in but I can’t really elaborate on why without spoilers.

Other than two very small quibbles I thought this was a thoroughly enjoyable read.  A fast paced story with likeable characters and a good deal of tension as their risky cons start to unfold.  I do love a good con story and this one is very cleverly done with a great ending.

I would definitely recommend Congress of Secrets.  The romance is very subtle and doesn’t overwhelm the story and the fantasy elements similarly don’t take over the plot.  Well written with lots of tension and the sort of book that once I finish it I want to go and explore the history of the period a little more – which is exactly what I’ve done now with both books by this author.

I will definitely pick up future books by Burgis and eagerly await her next book. 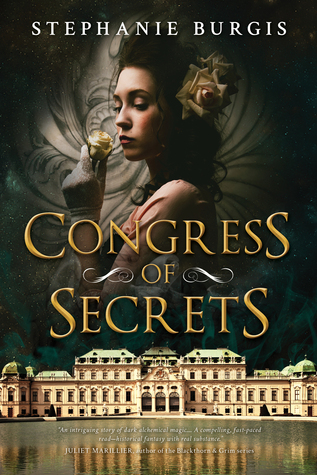