Rosewater by Tade Thompson
Published by Apex Book Company on November 15 2016
Genres: Science Fiction
Pages: 364
Format: eARC
Source: Publisher
Thanks to Apex Book Company for providing me with a copy of this book in exchange for my honest review. This does not affect my opinion of the book or the content of my review.

In my ongoing search for fiction with diverse settings and characters, I was excited to be offered a review copy of Rosewater from the wonderful folks at Apex Books. One of the reasons I like to read fiction from smaller publishers is that they have more freedom to publish books that might not fit the constraints of larger publishers. This means that much of what Apex publishes is fresh and original and edgy. Rosewater is a perfect example of this. It’s a beautifully written alien invasion/first contact story that isn’t afraid to break the rules of story format, and its African setting makes it perfect for those readers seeking diversity. This book is complex, and you will need to have patience while reading it. But that said, it’s an extremely satisfying read that ends on a (sort of) hopeful note, and left me with questions that I will be thinking about for days to come, no doubt.

The story takes place in Nigeria, in a small town near Lagos called Rosewater. Rosewater has sprung up around an odd alien domed structure that residents call Utopicity, where once a year, a split in the dome opens up and fills the air with an invisible but potent substance that completely heals everyone in the vicinity. Kaaro is a sensitive, someone who is able to access the xenosphere and “see” information. He’s like a psychic, and he’s been strong-armed into working for a secret government organization called Section 45. His job with S45 is to interrogate prisoners, and by going into the xenosphere, he can tease the truth from anyone. But something is happening to sensitives: they are beginning to die, and Kaaro knows he might be next.

Inside the xenosphere, a beautiful and very sexual woman named Molara, whose avatar is a butterfly, keeps contacting Kaaro. Who is she, and what sort of message is she trying to get across to him? Along with Kaaro’s new girlfriend Aminat, her brother Layi (who can burst into flames and wears a chain around his ankle so he doesn’t fly away) and a host of other strange characters, Kaaro is determined to find out the truth behind Wormwood’s purpose on Earth.

Where to even begin? Rosewater is an intricately plotted story that switches back and forth between the present—2066—and the past—2055—and is told from Kaaro’s first person point of view. If you are one of those “linear only” types of readers, you might struggle with this format, and I have to admit that even though this is one of my favorite types of storytelling, there were times when I forgot which timeline I was reading. In this case, I think a physical copy of the book would have been easier to read, because I found myself wanting to flip back to the beginning of the chapters to check the year. But once things got going and I began to understand what Thompson was doing, the story came together wonderfully.  The “past” timeline in 2055 tells the story of the first appearance in Nigeria of the alien called Wormwood and how Kaaro came to be involved with S45. In the present, Kaaro meets Aminat and continues his work for S45, all the while trying to figure out why sensitives are suddenly dying. Thompson slowly divulges important information about several ongoing mysteries, and it isn’t until nearly the end of the story that everything starts making sense and coming together. This truly is a masterfully constructed story, and I’m not sure how many writers could actually pull this off.

Because Kaaro is telling the story, his voice and personality is one of the things that make this such an interesting and unique story. Kaaro isn’t the most likable guy I’ve ever come across, but there were lots of things about him that I liked, if that makes sense. Kaaro speaks his mind and isn’t afraid to swear, even when he’s talking to his boss. He’s unabashedly horny all the time, and although the feminist side of me didn’t like the way he continually sexualized women, I had to give him credit for being honest. One of the more interesting parts of the story is his odd relationship with Molara in the xenosphere. She’s someone who seems to exist solely as a sexual fantasy, and in fact they have sex every time they are together (even after Kaaro starts seeing Aminat—bastard!). But Molara is actually hiding behind the guise of a butterfly, and it takes a while before her real purpose and identity are revealed.

Ultimately, Kaaro is a guy who’s being exploited for his rare ability and he’s just trying to cope. Plus he lives in a future Africa that doesn’t seem to have changed much. (On a side note, Thompson describes a horrific type of execution called “necklacing” which, you know, I just had to Google because I have never heard the term before. Let me tell you that necklacing is a REAL thing that has happened in Africa (and it may still be going on), and you should NOT Google it. Trust me. Reading about it is bad enough.)

Which brings me to the world building. Rosewater is full of cool ideas, and Thompson is the kind of writer who doesn’t use info dumping to explain his world. Remember how I said that the story is complex and develops slowly? One reason is that it takes some time for all the pieces of the world to come together. Here are some of the ideas that I loved, and strung together in a list like this they might not make sense, but hopefully they will pique your interest: floaters, weird white blobs with teeth that like to eat people; the Lijad, a sort of movable city that can only be accessed through a magical portal; America has gone “dark,” and since 2012 when the first alien being landed in London, no one has seen or heard from anyone in that country; reanimates, dead people whose bodies have been temporarily reanimated by the Opening. I could go on, but you get the idea. The world-building is cool.

This review has barely touched on all the wonders of Rosewater. It’s just one of those books you need to read for yourself. I see great things ahead for Tade Thompson, so take my advice and add Rosewater to your reading list. You can thank me later. 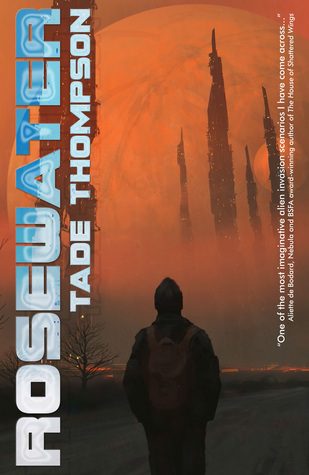