The Promise of the Child by Tom Toner
Series: The Amaranthine Spectrum #1
Published by Night Shade Books on October 11th 2016
Pages: 484
Format: eARC
Thanks to Night Shade Books for providing me with a copy of this book in exchange for my honest review. This does not affect my opinion of the book or the content of my review.

Most novels come with expectations, but when I began reading The Promise of the Child by Tom Toner I had none, expect maybe wondering who the child was going to be and why it had been promised. This is a debut novel by Toner and set in the far future, but when the opening quotes come from Byron and Wilde and the prologue begins in 1319 Prague, my curiosity was piqued.

The plot, as it sprawls over 500 pages, is complex and shouldn’t be summarised for the new reader. There is plenty to discover and the best way is simply to read it. The story follows numerous threads and characters through journeys both large and small. The main actor is Lycaste. He lives in the far future, on what is now called the Old World. He has an unrequited love despite being a renowned beauty, but must face greater battles ahead. He is our everyman that we see Toner’s world through. Sotiris Gianakos is 12,000 years old, from Cyprus. His sister has recently died and he is facing grief. This is the story of their coming together, and how they change each other’s lives.

So far, so not very science fiction. But we’re in the 47th-century Amaranthine Firmament. Humankind has populated the galaxy and split off into various species. The Amaranthine are the immortals. They are the rulers and can remember back when Earth was as it is now. They conquered death with a Soul Engine. However, such as long life usually ends in madness. Aaron the Longlife, who we are introduced to in Prague, is not all he seems to be, and is making a bid for the Amaranthine throne. Meanwhile, there is something called the Shell, which is being sort after and may hold secrets. And there are the various species the populate Toner’s universe; the Vulgar, the Melius (Lycaste’s) and others. And what of the dinosaurs?

The Melius can change the colour of their skin, and their servants are a kind of talking bird species. Lycaste commits a crime of passion and is cast out of his home, and embarks on a journey which might restore his life. His skin gets him into a series of adventures as he tries to find peace. So, at this point, still no child, as such.

Interesting that firmament can mean both space and vault. This both a vast story, with hidden secrets and highly personal moments. Meanwhile, Amaranthine is both a rose and something undying. Toner undoubtedly knows his stuff. He has thought clearly about what it means to live so long, what it means to live in a paradise, and what it means to have proper grown up lives, dealing with sibling loss, unrequited love, finding yourself, mortality, imperialism and more. I wonder, however, if the current vogue for Game of Thrones-esque complex political fantasy-with-hardly-any-fantasy is the inspiration for The Promise of the Child. There is so much going on with this book, also called The Amaranthine Spectrum #1, that it is sometimes very hard to follow. There are so many characters and ideas that I thought Toner might have been better served reigning some in. Occasional passages have too many made up names and political structures. He even finds room for some sexual and sexuality politics.

In this universe, there are no aliens, yet the descendants of humanity are so splintered in form and society that they may as well be alien to each other. The story takes its time exploring how they all interact with each other. It all comes together in the end, as all the plot threads converge on Aaron and the Shell.

The Promise of the Child reads like a historical fantasy, despite being a proper space opera. Characters speak in an old-fashioned manner. Political intrigue aside, this is a universe populated by citadels and sea monsters, lovers quarrels and quests over mountains, ocean-going ships and alchemists, thieves and the Mediterranean setting of part of the book. It is a hugely ambitious and imaginative piece of work which deserves any science fiction fan’s time and effort. It takes patience, but on occasion, patience is required when reading. Complex character names and political structures abound. This is because Toner doesn’t world build. He drops you in an existing universe and expects you to catch up as the ‘human’ dramas unfold. It is full of gorgeous and poetic prose too. And what of the child and its promise? It comes from Ovid (another nod the historical fantasy trope) “How little is the promise of the child fulfilled in the man”. A reference to Lycaste’s physical and metaphorical journey? A magical tale of a science fiction future. 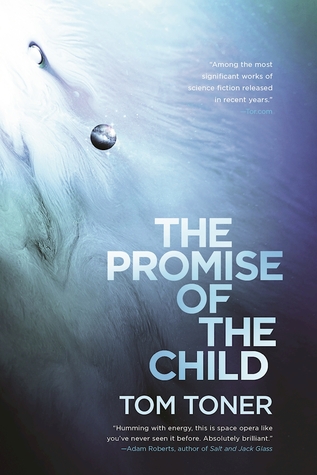