Dominion by Peter McLean
Series: The Burned Man #2
Published by Angry Robot on November 1st 2016
Genres: Fantasy
Our reviews of this author: Drake, Damnation
Format: eARC
Source: Publisher
Thanks to Angry Robot for providing me with a copy of this book in exchange for my honest review. This does not affect my opinion of the book or the content of my review.

Dominion is the second in the Burned Man series by Peter Blake.  The story picks up not long after Drake (the first in series) left off and the action is fairly intense from the get go. I thought Dominion was a solid instalment in the series, the characters have been fleshed out and added to and the dark side of London is explored further.  Be warned, if you haven’t read the first in series there may be spoilers contained below.

Dominion, probably in the style of other UF stories, is a self contained instalment – it can probably be read as a stand alone although I would always suggest starting from the first so that you pick up more background to the characters.

At the start of the story our main protagonist, Don Drake, former hitman (or diabolist), has been roped into checking out a potential problem below the streets of London – in fact below the Tube.  Basically, deep beneath the underground tunnels of London live the elementals, gnomes.  It seems that their home is slowly being destroyed by something they know only as the ‘Rotman’.  Everything is decaying, including those who lay eyes on this monster and the rot is becoming so overwhelming that parts of London could easily start to collapse.  Unfortunately for Don and the gnomes the Rotman is much worse than they suspect.  He is in fact a powerful archdemon known as Bianakith,  He spreads disease and corrupts everything he comes into contact with.  Don is going to need all the help he can conjure to help with this problem and, well, not to put to fine a point on it, Bianakith is actually the least of his worries.

I can’t really give too much away concerning the plot.  Suffice to say there’s much more to it than I’ve made out above and there are plenty of twists in the tale, certainly enough surprises to keep this series going strong for a while yet!  Like Don, you’re never really sure who to trust and who not to trust and there’s a lot of talking in riddles with some of the characters which adds to that dilemma.

In terms of characters.  Well, obviously we have Don.  He’s still not a totally lovable character nor is he an unlikable one.  I think I mentioned in my review of Drake that he comes across as something of a coward, he makes poor decisions, spends a lot of his time drinking copious amounts of alcohol and can be a bit distracted quite easily by a good looking female.  At the moment I would say that I like him with reservations.  He hasn’t quite reached the stage yet of being a lovable rogue but he certainly grew on me a good deal more in this book than the first – saying that I sometimes wish he could perhaps cut down his sarcastic monologue a little.  I suppose the thing with Don is he’s spent a lot of time with his own personal demon and maybe being around such a nasty little character doesn’t bring out the best in a person after so many years.  The Burned Man (basically a demon who has been summoned and bound here on earth) is nobody’s friend.  His aim is to be free and he will go to any length to achieve this.  It would be easy to think of these two as a double act – and maybe even Don could fall into that trap – but they’re anything but.  The Burned Man is a demon and a very powerful one at that and Don needs to always keep that in mind.

Trixie, or Meselandrarasatrixiel, is an almost fallen angel!  She’s conflicted to say the least and her aura gives this away somewhat.  Trixie was put on earth to banish the Furies, many  moons ago – or perhaps she was put here to torment Don!  Following the conclusion in Drake she’s currently residing at Don’s place – although this is a purely platonic arrangement – much to his despair.  Of course, being an angel she has an ethereal quality, almost too beautiful, and Don can barely function every time he looks at her.  She is however a fearless warrior and comes in very handy in a tight spot.  Unfortunately she seems to have fallen in love with the wrong guy – to put it mildly.  Adam.

Adam, better known as Lucifer, is the handsome rake of the piece.  He has the creepy ability to materialise out of the shadows and to know everything about everything – at least that’s what his confident swagger seems to portray. You can’t help liking him somehow although, again, he isn’t a good guy – unless your aims momentarily happen to coincide with his.

On top of this we meet the usual crew at Wormwood’s.  A supernatural club which acts as a neutral ground for all to come together – this is an invitation only admittance and in fact most of us would be unaware of it’s presence.  Wormwoods is a great creation – for me I imagine it as something from the 50s, I’m not sure why, it just comes over as a glamorous club from an old noir movie and whenever Don and the others pay a visit you know you’re going to make the acquaintance of some interesting characters.

I think the other element that really helps to build this story is the setting, the City of London.  It really does lend itself to the urban fantasy story and McLean makes great use of it’s underground tunnels, dark alleyways and criminal underbelly to give his story a dark and gritty feel.  Think along the lines of Urban Fantasy meets Lock, Stock and Two Smoking Barrels.  Bad language and a certain level of violence with angels and demons fighting it out instead of gangsters.

I thought this was a really firm second in series that definitely added some more meat to the bones of McLean’s world.  It’s fast paced and entertaining with a conclusion that definitely makes me want to read more. 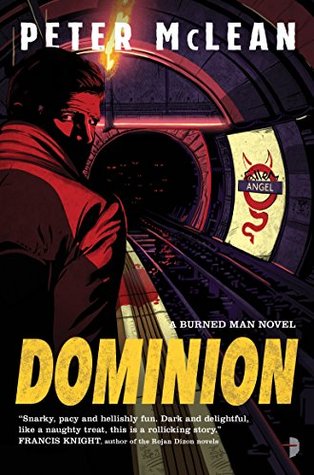