After Atlas by Emma Newman
Series: Planetfall #2
Published by Roc on November 8 2016
Genres: Science Fiction
Pages: 336
Our reviews of this author: Planetfall
Format: ARC
Source: Publisher
Thanks to Roc for providing me with a copy of this book in exchange for my honest review. This does not affect my opinion of the book or the content of my review.

I enjoyed Planetfall last year, which I read during Sci-Fi Month 2015, but I was stunned by how much more I loved After Atlas, a “companion” novel which takes place in the same world but follows different characters and has a completely different story line. After Atlas references some events and characters from the first book, but you certainly don’t have to read it first in order to enjoy this one. In fact, if you haven’t read Planetfall, I highly recommend starting with After Atlas, simply because it’s the better book.

After Atlas is basically a murder mystery, and nearly the entire story is focused on detective Carlos Moreno digging into the murder of high-profile cult leader Alejandro Casales. Carlos is shocked by Casales’ death, a man who was a beloved father figure to Carlos when he was a child. Taken against his will by his father to live in a cult, a secluded fortress called the Circle where all technology is banned, Carlos’ only bright memories are spending time with Alejandro, who taught him to live off the land. When the forensic team suggests the death could be a suicide, Carlos knows Alejandro’s death is much more than it appears on the surface. After all, how could a man who ruled a peaceful commune and loved life so much possibly kill himself? Carlos knows the answers are deeply buried, and it’s up to him and his Artificial Personal Assistant Tia to find the truth.

And the timing of Casales’ death is too coincidental: it’s the fortieth anniversary of the spaceship Atlas’s departure from Earth, the ship that took his mother from Carlos when he was just a baby, and a capsule that has come back from that fateful trip is about to be opened, its secrets divulged to the public. How are all these things tied together? And how does Carlos fit into the picture? One thing’s for sure, delving into these mysteries is sure to dredge up painful moments from his past.

I’ve always loved police procedurals, after all I’m a huge fan of Bones and Castle, and I realized after reading this book that I should read more of them, because I’m fascinated by forensic science. But forensics in Newman’s future are quite different in many ways from the realistic shows on TV. Technology is so advanced that it would be nearly impossible to not solve a crime, due to all the information that is immediately available. Carlos is connected to the internet 24/7 by a chip in his brain, a chip that grants him instant access to almost all information. Even better, his APA, who he calls Tia, can filter out whatever he isn’t interested in, file it in any way that Carlos asks her to, and send messages on his behalf instantly. It’s where our future might be headed someday, the unnerving idea that there really is no escape from the internet.

As a detective, Carlos has access to all sorts of cool things, like being able to visit a crime scene through virtual reality technology, and because crime scenes are recorded from all angles of the room, it’s easy to go back weeks after the crime and investigate even the smallest corners of the room for evidence. Carlos pulls off some truly amazing feats of discovering clues, and even though there were times when his methods seemed almost too convenient, I just let it go because it was so much fun to read.

And while the mystery part of the story is the main focus, I was just as enthralled by Carlos, who is one of the most complex characters I’ve had the pleasure of meeting in fiction. This guy has been through a lot in his life, and as the story progresses we get glimpses into his past that made me wonder how he has survived this long. Carlos is currently owned by a corporation called the Ministry of Justice, and by “owned” I mean he doesn’t have any freedom or personal rights. His term of service to the MOJ is fifty years, and when he makes mistakes that time is extended. As cruel as this sounds, I loved the idea, and the way Carlos handles his slavery (because that’s what it is) shows what a hard worker he is. His best friend Dee, who helped him live through a rough patch before his contract was bought by the MOJ, is precious to him because she’s one of the few people who knows exactly what he’s been through. And as bad as things sound, we discover later in the book that they could actually be much worse.

Other characters of note: Travis, a computer hacker who is unfortunately married to an extremely cruel man named Gabor, and a gender neutral character named Naal Delaney who is of great help to Carlos during the investigation. You don’t see many gender neutral characters in fiction, and although I did struggle a bit with the author’s use of the pronouns “hir” and “ze,” it was worth it to spend time with such an interesting person.

By the end of the book, there was still so much more I wanted to know about these characters and Newman’s fascinating world. And yet, I read the last page and was satisfied—despite the shocker of an ending. After Atlas is a complete and nearly perfectly plotted and paced story. I grew to love the characters so much, that I would happily read more stories set in this world. The ending suggests that the author might pick things up where she left us, because a whole new story has the potential to unfold from those events. But she could just as well jump around and tell more stories from other moments in time. Really, the possibilities are endless, and I for one can’t wait to see what she decides to write next. 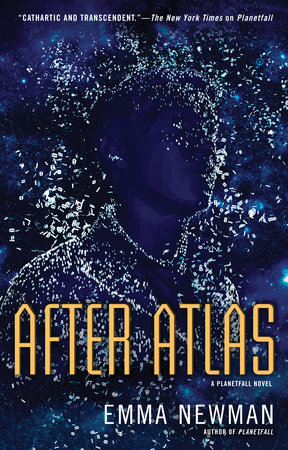