An Import of Intrigue by Marshall Ryan Maresca
Series: The Maradaine Constabulary #2
Published by DAW on November 1st 2016
Pages: 389
Our reviews of this author: The Alchemy of Chaos, The Holver Alley Crew, The Imposters of Aventil
Thanks to DAW for providing me with a copy of this book in exchange for my honest review. This does not affect my opinion of the book or the content of my review.

An Import of Intrigue is the second installment of The Maradaine Constabulary. It delves deeper into the politics impacting Maradaine and also exposes more about Satrine’s past and Jinx’s magic.

Once again, I found myself more interested in the characters than the actual case they are working on.  Full disclosure, I often don’t do well with detective mystery books, so that is not surprising based on my reading preferences.

The investigation the book centers on is a murder of a high ranking member of one of Maradaine’s cultural groups. The evidence at the scene points in a multitude of directions, leaving virtually everyone a suspect. To complicate the investigation, and add to the story, Jinx is having a bit of a personal crisis with his magical abilities. So not only do they have to solve the case, Jinx also has a mystery of what is happening to him and his magic. Is he starting to go mad like some members of his family? Or can he find a cause and solution.

In this book, I felt like my engagement with the plot may have been hindered a bit by the introduction of all the different cultural factions that were central to their investigation. Now, this can often add quite a bit to a story, but with them all introduced at the same time and with little reference to easily differentiate them, I found myself with out a clear understanding of any of them. I feel like Maresca tried to do too much with them too quickly and the book may have benefited from a little more focus on each of these different areas. And to be fair, they may have been presented in the previous books, but if so, I don’t believe differentiating details were as important as they are in this on. I suspect this is part of the reason epic fantasies do well with a number of POVs,  as a POV in each of these groups would have helped the reader identify them better. But Maresca’s books are not grand epic fantasies. They are usually quick, fun reads that benefit from good characters and a quick pace. Don’t get me wrong, there are interesting aspect to the world as well, but in the past it has been left on a simpler scale, leaving the reader with a feel for some intriguing components, but they were the types of facts that were easy to pick up on the fly as the book progressed. This book tried to get a bit more intricate with the politics and the pace lagged a little for me as a result. But the good news is, if you just go with the flow it does pick up and by the end, I was left feeling eager for book 3.

As for the characters, Satrine in particular I am very intrigued with. While I generally prefer the Maradaine series, Satrine may be the character that interests me the most across Maresca’s books. I found myself getting more and more interested about her past in the Druth Intelligence as well as her personal life. Honestly, I would love a book or series just focused on her. I don’t often advocate prequel trilogies, because I feel they can be more difficult to keep the reader engaged and accomplish the same level of suspense, but Satrine’s story is one I would absolutely grab in a heartbeat. I love the way her past is being revealed, teasing the reader with a captivating history for a very likable character. I really want this story, even as parts of it are being revealed.

Overall, Import of Intrigue left me wanting more, which is always a solid indicator of a book worth reading. 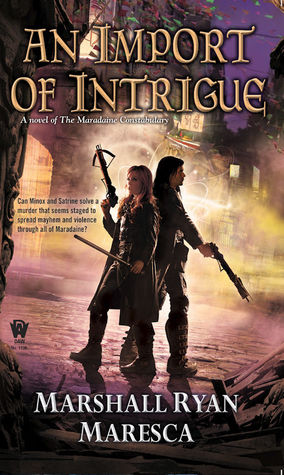